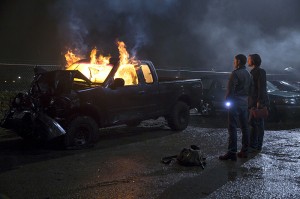 Even on SUPERNATURAL, there have to be some episodes that are just so-so. Not great, not awful, not crazy, just the show doing what it does when nobody is feeling particularly inspired that week, though everyone is still perfectly competent.

“Halt & Catch Fire” (not to be confused with the brilliant-every-episode AMC series of that title) is such an episode. Sam (Jared Padalecki) wants to hang around and wait to hear from Castiel how the search for Cain is going, but Dean (Jensen Ackles) is restless and finds a case. A college student claims that her boyfriend’s truck was driven off a bridge by something that sounds supernatural.

Sure enough, there’s a ghost in the machines. After a wrong guess about the ghost’s identity, and a couple more deaths, Sam and Dean’s detective work leads them to the death of Andrew Silver (Jeremy Thorsen). Andrew died in one-car crash, but this turns out to have been caused by a truck full of careless college students who were being irresponsible with their cell phones. To add insult to injury, the driver prevented one of his passengers, Delilah (Ari Milner) from calling 911. Then a power line hit Andrew’s car and the driver peeled away, still without letting anyone call for help. Turns out the power line is connected to the town’s wi-fi, which is how Andrew’s ghost is getting around to his victims.

Andrew’s ghost is understandably angry. While Dean tries to protect lone survivor Delilah in her dorm, Sam visits with grieving widow Corey (Barbara Kottmeier), who has been receiving loving emails from the ghost. Corey acknowledges that the ghost’s emails have been all about revenge lately.

Just as Andrew is trying to kill Dean and Delilah, Corey calls and begs Andrew to stop and seek peace instead of vengeance. Andrew complies and fades away, and Corey is ready to accept Delilah’s apology.

Dean tells Sam that he too wants peace – he is going to give up searching for a cure for the Mark of Cain and just go on trying to help people.

For those just tuning in, this is a fairly standard exercise in ghost-busting, with a few good lines here and there. For those who are faithfully playing along, it’s still that, but the through-line material is on the silly side. First, wasn’t it just the previous week that Dean was sitting around being moody and Sam was urging him to get out and work on a case? Since working on cases seems to be good for Dean, why does Sam want to sit in the bunker? Castiel can reach them by phone wherever they are.

Second, the whole argument between Sam and Dean about whether to keep searching for a cure or take each day as it comes would be much more meaningful if either of them were doing something more active than waiting for a phone call. SUPERNATURAL runs on Winchester brotherly drama, but this is stretching it thin.

Otherwise, this episode will neither shame nor ennoble all parties concerned.