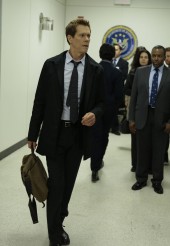 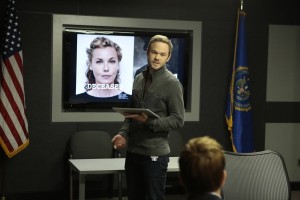 In Fox’s THE FOLLOWING, returning Mondays at 9 PM on March 2, Kevin Bacon’s FBI Agent Ryan Hardy has spent two seasons chasing James Purefoy’s serial killer Joe Carroll at great personal cost. In the series created by Kevin Williamson, Carroll has his own obsession with Hardy, especially because Hardy became involved with Joe’s ex-wife Claire (Natalie Zea). At the end of Season 2, Ryan finally caught Joe and decided not to kill him in an effort to uphold the law and put vengeance behind him.

So where are we at the beginning of Season 3? THE FOLLOWING’s current show runners/executive producers Brett Mahoney (CSI: MIAMI, ELI STONE) and Alexi Hawley (CASTLE, BODY OF PROOF) provide some answers.

AX: Were you on staff on THE FOLLOWING before this season?

BRETT MAHONEY: We were on staff the second season.

AX: Did you know you were being groomed as the show runners for this season?

MAHONEY: No, no. We actually weren’t. Someone else had to come in and actually started the first part of the third season, and then we were brought on after that.

AX: You’ve got some big changes in that Joe Carroll is now locked up, doing the Hannibal Lecter thing and advising other serial killers.

MAHONEY: We try and do a little twist. It’s not quite Hannibal Lecter.

AX: How is Ryan evolving after all of the chaos of the first two seasons? He spent most of second season thinking that he’d got Claire killed, but it turned out she was still alive …

MAHONEY: They separated at the end of last season, they parted ways.

AX: But it turns out he didn’t get her killed, so he’s not carrying the guilt of that …

MAHONEY: No, not at all. We saw the end of last season as a truly cathartic moment, that when [Ryan] chose not to kill Joe Carroll, that he really was turning the page on that chapter. And now the show starts a year later, and he is a happy guy, he is in a healthy relationship, probably his first one, because Claire was the wife, the ex-wife, of a serial killer. And even Carrie Cooke [Sprague Grayden] last year was a reporter who kind of tricked him into bed to get an interview. So Gwen [Zuleikha Robinson], who is our new love interest, is actually a healthy relationship, which is a new thing for him. So he has moved on.

HAWLEY: It’s a different Ryan Hardy than what we’ve seen before. He’s going to smile a little bit more and he has a lightness to him, he gets a little bit of his own spirit when he’s away from Joe Carroll. Of course, Joe Carroll doesn’t want that. Joe Carroll wants to do everything he can to draw him back in.

AX: Is Ryan’s central struggle this season going to be whether or not he returns to being somebody who shoots a lot of people?

HAWLEY: I think that’s part of it, but I think his big struggle is, can Ryan have happiness? This is someone who feels like he doesn’t deserve happiness, he doesn’t deserve a full, three-dimensional life and a family, so his struggle is, can he have those things, can he truly be happy, and is he good, is he bad? It’s him coming to terms with his own character and who he is.

MAHONEY: And also, in terms of the way he presents to the world, when he’s back at the FBI, and he loves his job, because he’s good at the job, but the obsession that he had with Joe Carroll – does that carry over? Can he put that away and just do this job, or is it always going to draw him in and ruin his personal life?

HAWLEY: He’s trying to find balance, which I think is reflective of what a lot of us do in our everyday lives in terms of trying to find that work/family balance.

AX: Does Ryan become obsessed with the new serial killer?

MAHONEY: Well, we have several new villains on the show this year, and ultimately, there’s a lot going on that draws him in, but the concern is, is he going to just pass on one obsession for another? And that is a part of the show this year.

AX: Actor Michael Ealy plays one of your antagonists this season. He starred in ALMOST HUMAN for Fox last season. Did you hire him because you guys like him, or because Fox said, “Hey, he was just on one of our shows, will you take a look?”

MAHONEY: And really, working with him, I mean, it’s surprising the dark places he’s been able to go, and what he’s shown us has really been pretty amazing.

AX: Kevin Williamson created THE FOLLOWING and is one of the executive producers. What’s his involvement with the show in Season 3?

MAHONEY: I think Kevin Williamson will always love THE FOLLOWING. He gets all of the material. if he has something to say, he lets us know.

HAWLEY: Right. He is now doing his show [STALKER on CBS], and he’s there for us as somebody we can rely on, but he’s been very respectful about letting us tell the stories that we want to tell.

AX: And is Valorie Curry as Emma coming back in any capacity, despite the character’s death last season? Maybe as a dream or a hallucination …?

MAHONEY: We love her.

MAHONEY: Sam Underwood is back, and he’s phenomenal. He’s an interesting character this year. We won’t say more, but he’s very compelling.

HAWLEY: He’s just amazing. And that is an actor who, we’ve asked him to do some pretty challenging things and he always comes through and pays off in a way that even exceeds our expectations.

AX: It’s been said that THE FOLLOWING is going to be a little bit less bloody this year …

MAHONEY: Uh-huh. Well, here’s what I’d to say about that. We want to build suspense into the show. We think that scary practical horror of, I’m walking down a dark hallway and I don’t know what’s around the corner, is really fundamental to the kind of horror that we want to tell. And it’s not as much about the violence, but our feeling is, if you do more of the suspense, then when the violence does happen – look, we’re not shy, it’s not like there’s no blood in the show, but it has more impact than if we’re just stabbing people every five minutes.

HAWLEY: We found actually the suggestion of it is often more powerful than the showing of it. Because the audience’s imagination just takes it to different levels that we could never show. So we can just hint at it and let the audience take it from there.

AX: And what would you most like people to know about going into THE FOLLOWING Season 3?

HAWLEY: I think that this is a place where a new audience doesn’t have to feel weighed down in terms of whether they’ve seen the previous two seasons or not, that this is an entry point where they can come on, because this feels like a new chapter.

MAHONEY: Yeah. We’re launching a new chapter in the show, and we have brand-new characters, we’re telling new storylines, and while Joe Carroll is a big part of it, there’s plenty of stuff to jump in and get involved with right from the beginning.

HAWLEY: I think we’ve found that sweet spot that will please current viewers, but also bring in a new audience.

This interview was conducted at a party thrown by Fox Network at the Pasadena Langham-Huntington Hotel for the Television Critics Association.