Home » Inside Out Review 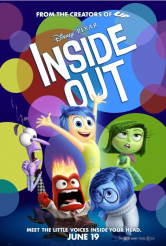 © 2015 Disney/Pixar
INSIDE OUT
Reviews

Movie Review: INSIDE OUT 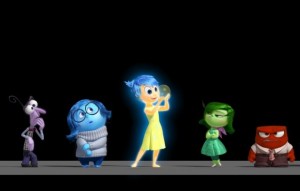 INSIDE OUT is not the first story to imagine that the components of the human mind have personalities of their own, but it is perhaps the most charming and touching. Positing that everyone has a mental control room populated by an individual version of Joy, Sadness, Fear, Anger and Disgust, the CGI-animated INSIDE OUT cleverly and gently deals with issues like the purpose of sorrow and what can be happening with clinical depression, all in the service of a colorful adventure story.

Eleven-year-old Riley (voiced by Kaitlyn Dias) is moving with her mom (voiced by Diane Lane) and dad (voiced by Kyle MacLachlan) from snowy Minnesota to bustling San Francisco. With Joy (voiced by Amy Poehler) running the show within Riley’s mind, the little girl cheerfully copes with setbacks like the family’s narrow new home and the fact that the movers haven’t brought any of the furniture yet.

Then an accident involving long-term memory deposits both Joy and Sadness (voiced by Phyllis Smith) far from Riley’s controls. Suddenly, Fear (voiced by Bill Hader), Anger (voiced by Lewis Black) and Disgust (voiced by Mindy Kaling) are in charge. Riley goes from sunny to sullen, not sure herself what’s wrong – after all, she has no idea that her emotions have identities and that some of them are lost – while Joy and Sadness try to find their way back to where they belong.

The workings of Riley’s mind are depicted in ways that are imaginative and intuitive, with all of Riley’s emotions working together to help her, even when this means they’re not at the fore. The film also deals with the purpose of sadness in life and the clear illustration of the notion that when sadness touches a memory, it is always tinged by that quality thereafter.

There are moments in INSIDE OUT that, without hammering at us or insisting on it, are capable of bringing viewers to tears. However, there is also a great spirit of fun here, with surprises that make great sense around every corner. There are perhaps a couple quibbles (why is Riley the only character we see who had emotions of both genders in her mind?), but the concept is very well-thought-out in ways that will resonate with different viewers of different ages on different levels.

The design is also appealing, with the humans looking suitably human, while the characters dwelling inside Riley’s mind are very, very subtle reflections of her, with different colors and shapes and a kind of tactile softness that makes them seem as malleable as thought. The voice actors all do great work, with Poehler demonstrating that she can be upbeat without the crusading zeal of her PARKS AND REC character and Lewis Black nailing the loyal but explosive when roused Anger.

Kids should really like INSIDE OUT as a magical quest story of great consequence, and the film certainly is that. Adults are likely to be moved and impressed by its insights, skill and willingness to do something new.

The film is accompanied by the Pixar short LAVA, a sunny and funny romance between an unlikely couple.