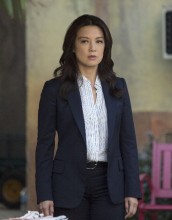 The actress talks playing both sides of a fight scene, plus May's feelings about Ward, Coulson and Skye 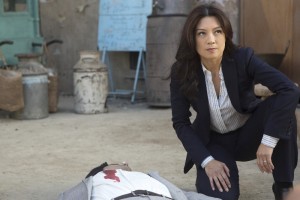 On ABC’s MARVEL’S AGENTS OF SHIELD, now in its second season Tuesdays at 9 PM, all of the characters are in the midst of crisis. S.H.I.E.L.D. director Phil Coulson (Clark Gregg) was appointed by previous director Nick Fury (Samuel L. Jackson), but since almost nobody knows this, Coulson can’t say this to alternate shield director Robert Gonzalez (Edward James Olmos), who thinks Coulson has gone rogue. Coulson’s protégé Skye (Chloe Bennet) has found that she has genetic superpowers that allow her to create earthquakes and scare the hell out of her. Grant Ward (Brett Dalton) actually has gone rogue – Coulson recruited him to S.H.I.E.L.D., but then Ward turned out to be an agent for the evil organization H.Y.D.R.A. Since then, Ward has left H.Y.D.R.A. and struck out on his own with Kira (Maya Stojan), also known as Agent 33.

Kira got brainwashed by H.Y.D.R.A. and was able to assume the appearance of S.H.I.E.L.D. Agent Melinda May, played by Ming-Na Wen. May is coping with not only the split in S.H.I.E.L.D. between Coulson and Gonzalez, but also the possibility that Coulson has been keeping secrets from her, the reappearance of her ex-husband (Blair Underwood), her concerns about Skye’s powers and the fact that Coulson seems to have teamed up with Ward, who’s not only a traitor but also May’s former sexual partner.

Born in Macau, Wen moved to New York with her family at age four. Major roles have included being a series regular on E.R. and STARGATE: UNIVERSE, as well as providing the speaking voice for Disney’s title heroine in MULAN. For all the chaos her character is coping with, Wen seems delighted to be playing May.

AX: Do you have any feelings about going from spending two years on STARGATE: UNIVERSE, where you spent a lot of time in a flying craft –

AX: To SHIELD, where you spend a lot of time in a flying craft. This is better lit, and you do get to go outside a lot more often …

WEN: Well, what’s so great about this – we get to travel the world and although we really don’t – here’s a secret, we don’t leave L.A. very often – it’s just so great. We’re in a lot of locations.

AX: Is Melinda May as a character original to the AGENTS OF SHIELD TV series? She’s not from the comics?

WEN: Yeah. She is a creation of [series creators Joss Whedon, Jed Whedon and Maurissa Tancharoen].

AX: When you signed on to the show, did you have any input into the character?

WEN: I think they had a very, very clear idea of what they wanted Melinda May to be, but over time, as we’ve gone through the series, it’s been really exciting to us giving each other some feedback about how far they can take Melinda May. And I’m just so thankful that whatever training I had in the past, whether it was dance or whether it was martial arts, it’s all coming into play because my body is still able to respond [laughs] in fight scenes.

AX: So you already knew how to do those Agent May high kicks in the fights?

WEN: I did, but it was great. We have an amazing stunt team that really helps us out and keeps us in shape.

AX: For awhile there, before Agent 33 got back her own face, you were playing her impersonating May, as well as the real May. When you heard this was coming, was that like, “Oh, great, that’s going to be fun,” or “Oh, no”?

WEN: Probably a little of both, because the prosthetics [after Agent 33-as-May suffers a burn to one side of her face] is an extra two hours of my day. So I [had] to come in a lot earlier for the prosthetics, but for me, any time I get a chance to create a new character, it’s so much fun and it’s kind of odd to create somebody like her, because how do you create a character that’s been brainwashed? And so you have to kind of dig deep into yourself about those days when you feel lost and you don’t know who you are and you have amnesia [laughs].

AX: Did you study Maya Stojan, who plays Agent 33, before you started playing that character?

WEN: I studied Maya’s movements and her speech pattern a little bit, and that’s what I incorporated as Agent 33.

AX: There was an episode earlier this season where first May has to formally dance with Coulson at a party, and then has a fight scene with Agent 33 in her Agent May guise. How did you do that?

WEN: It was a really incredible challenge, because I had to learn not only to ballroom dance, but I had to learn both sides of the fight scene. And then on top of that, we had to do it in lingerie and a very warm silver sequins dress and heels, and then incorporating all the special effects into it. They definitely superimposed my face [onto a stunt double for certain shots].

AX: Was one side of the fight, the other side or the ballroom the most difficult?

WEN: Hmm. I was very hesitant to fight in the lingerie in the beginning, but we picked a really great lingerie to fight in and the dress actually became more problematic because of the high slit, because of the sequins – sequins were flying all over the place, all the time – and whenever I had to do high kicks I had to be careful – you know, it’s ABC. You don’t want to show too much.

AX: We’ve learned a lot more about May this season, but she still has a lot of mystery to her, and she was even more enigmatic when we first met her. Did the writers fill you in on her back story or do you just invent one in your mind?

WEN:  It’s interesting, because what I have to do when I’m given a script and there’s a lot of vague mentions of a past, I just fill it with my own personal angst, because you really have to have that come through the eyes of this character, since she is so expressionless in so many ways [laughs] and it’s all suppressed, and that’s my own little world that I play in. And if I do get too emotional, which I like to do, they will pull me back and say, “She wouldn’t reveal it as much. Not yet.”

AX: May does still have a sense of humor. Even though we didn’t get to see her doing it, were you happy when you found out that she had caused Fitz, Iain De Caestecker’s character, to essentially get a pie in the face?

WEN: Yes. It was great. It’s those little moments – I call them her Mona Lisa moments – where she breaks into that little mysterious smile and that’s it, that’s as far as she’ll go.

AX:  When May and Ward were involved sexually, do you think they had normal sex or room-destroying sex?

WEN: I would like to think that they had FIFTY SHADES OF GREY sex [laughs]. I mean, they [had] a lot of S.H.I.E.L.D. toys to play with.

AX: More seriously, do you think May feels most betrayed by Ward as a S.H.I.E.L.D. agent or as a human being?

WEN: Oh. As a friend, I think, she feels much more betrayed. And as a sex partner, too.

AX: And do you think May’s feelings about Skye are more maternal or sisterly?

Skye and May, their relationship grew from the beginning. She didn’t understand why she was on this bus with us, she just trusted Coulson, he’s the leader, he’s got a game plan, and I think May was one of those people that just didn’t like her there. [May thought Skye] was someone who could cause an issue when it comes to safety if they go out on a mission, she’s just not ready. And over time, because Skye has proven herself through the training and just her intelligence, when she dressed up as May, that’s the one moment that I love so much, because May just looks at her and goes, “Nice jacket.” That’s her way of saying – my parents, they don’t say, “I love you,” they’ll be like, to my brother, I remember, one time my dad would be like, “You no good son.” And in a way, that’s him acknowledging that he loves him [laughs]. So May is very protective. She wants to protect her family, her team.

AX: May is now seemingly working with Gonzalez, though we don’t know what’s really going on in her mind. How is working with Edward James Olmos, who plays Gonzalez?

WEN: He’s my hero. Everything from BATTLESTAR GALACTICA to all the other projects and films that he’s ever done. He’s an incredible actor and a wonderful human being and I’m so excited.

AX: Awhile back, Coulson got May to promise to kill him if he became completely out of control. Do you think May really could put Coulson down?

WEN: I don’t know. She’s good at following orders, but I think it would destroy her, for sure.

AX: Do you think May has romantic feelings towards Coulson? That’s not a spoiler question as to whether she’ll act on them, just as to whether you believe she has them.

WEN: I think love is so many-layered in being human, and her loyalty and her feelings for Coulson as a friend – I can’t help but think that there is some form of love there. Whatever that is, it’s certainly there.

AX: Without getting spoilery, is there anything you can tease about the back half of the season?

WEN: Yeah, definitely the fight between H.Y.D.R.A. and S.H.I.E.L.D., and who’s heading H.Y.D.R.A. at this point, because there’s a lot of twists and turns about that. Also, the introduction of the Inhumans lends itself to incredible storylines that I think fans will really love.

This interview was conducted at ABC’s party for the Television Critics Association at Pasadena’s Langham-Huntington Hotel.