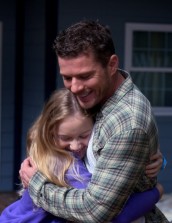 SECRETS AND LIES: Tracey Robertson give the scoop on Season 1 – exclusive interview

The executive producer talks about the ABC murder mystery series 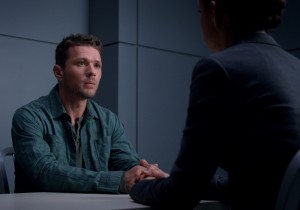 In SECRETS AND LIES, which has its first-season finale Sunday May 3 at 9 PM on ABC, a quiet upscale suburban cul-de-sac is upended when a little boy is found murdered in the nearby woods. Ryan Philippe stars as Ben Crawford, who is suspected of the murder; Juliette Lewis plays steely homicide detective Andrea Cornell, who presses him for a confession.

SECRETS AND LIES is adapted from an Australian series of the same name which was written by Stephen Irwin; Barbie Kligman adapted the show for ABC in the U.S.

Tracey Robertson, who served as an executive producer on both versions, talks about the similarities, the differences … and an inflatable shark.

AX: Has the original SECRETS AND LIES aired on U.S. television?

TRACEY ROBERTSON: No, it hasn’t. It’s on Netflix.

AX: Can you speak to the key differences between the two?

ROBERTSON: When you take a format, you get a blueprint. We had to add in more characters, so we had to spread it out. We’ve had to look a lot deeper at all of those characters and take the storylines in different ways. The characters have much bigger back stories, which we use in the storytelling. And it’s a bigger version of what we did in Australia. I’d like to think that people [who have seen the original] think that we’ve taken it in a different way. I wouldn’t like to think that anyone would be disappointed with what we’ve done. I think there are a lot of surprises.

AX: Can you talk about the differences in the way Ben is played by Ryan Philippe in the American version, and Martin Henderson, who played the role in the Australian version?

ROBERTSON: I love Martin and I love Ryan, so it’s a very difficult thing to say. I think Ryan’s amazing and Martin’s amazing. He lives here [in Los Angeles] and he’s a lovely, lovely man.

That’s a hard one. I think maybe Ryan [as Ben] was more active in how he tried to deal with it, in the way that it was written, not necessarily in the way they played it, because it was written differently throughout. I think that where it was different is that Martin’s character didn’t trust anyone and in the American version, he trusted in his friend Dave, he confided in him, and so there was a little bit more where he played it slightly differently.

AX: In the Australian version, is the investigating detective male?

AX: Is he as tough as Juliette Lewis’ character is in the American version?

ROBERTSON: He has similar traits, but I think Barbie said before, which I thought was really interesting, that if you write the same traits on a page and then you give those traits to a male, they’ll be interpreted very differently to how a female will portray them. So I think that he’s a very tough character; I think that Juliette is amazing.

AX: You shot the American version in Wilmington, North Carolina. How did you come to choose the particular cul-de-sac you used as the main location?

ROBERTSON: We wanted the houses to be in a particular position, close enough together so that there was a feeling of enclosedness about the street, so there’s a little bit of people in a community who know each other’s business. We wanted the houses to look interesting, we wanted them to be, what would be your ideal kind of life? Because we’re basically taking a community and then throwing it on its head and then revealing all these things about it. And there’s so much about it that’s proximity. We wanted to be close to the woods, so that [Ben] could come out of the woods as if this is normal, this is what we do every day. We did a lot of Google searches about streets, cul-de-sacs, that had woods next to them, that were near rivers. There are a whole lot of things, and then we honed it down. 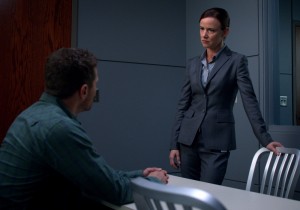 We were very specific about what we wanted, so we had to draw maps [for the location scouts] about what was our ideal scenario, so we were trying to find a house that we could build a pool house out the back, because we already had a really strong idea of where all the characters had to live so that they could be in each other’s lives. And that was very important. But also, we wanted the show to look great, and the houses look great. It’s a great street and it feels like an idyllic street, and so it was important that it looked great as well.

AX: Did the real-life residents of the cul-de-sac give you a curfew?

ROBERTSON: We had a curfew. It was 11:30 on a Friday night and 10 on a weeknight. In those streets, there’s community. There were people who head up the street community, and so we had to deal a lot with the street and get everyone’s approval to be able to film on the street, because we were there for four months, and then earlier on in the year, we repainted houses and we put Christmas decorations up all year. So there were a lot of things that we had to get access to. It was cold when we started, and then we worked all through summer, so we had to change the color of the grass.

The biggest concern was that people would get a bit tired of us being around, but they were absolutely amazing, and I think that everyone on the crew were incredibly respectful of where we were. We had golf carts go up and down the streets instead of cars and we parked outside and, from what I hear, at the end, people were really sad to see us go.

AX: How important is the location to the storytelling?

ROBERTSON: The house and the street are definitely characters in the show and that’s what we set out to do. Because people, when they move into a neighborhood, they become part of that neighborhood, and it’s those people who bring that community together and then when you do something, you turn it on its head. This show is about a mystery and this is where it’s really different to anything else, shows like GRACEPOINT or BROADCHURCH, because it’s really a character show about when something happens and people just become what you never thought they’d become.

AX: Where did you shoot the Australian version?

ROBERTSON: We shot in a suburb in Brisbane, we shot in Ashburgh.

AX: Probably silly question – what is Los Angeles famous for in Australia?

AX: Because I think Brisbane, Australia may be most famous here for Great White shark attacks off the coast.

AX: In the Australian version, does that ever come up at all?

ROBERTSON: Shark attacks? No, because they live in the suburbs, they live far away from the beach. It’s funny that you say that, because in the pool house where Dave [played by Damon Gameau in the Australian version, Dan Fogler in the U.S.] lives, there is a blow-up shark and at the end of the production, I took it home to my kids in their pool and I brought it out to America with us, so I now have a shark which was in the original show. I would never have thought of that.

AX: What is the division of responsibility amongst the producers?

ROBERTSON: Yeah. It’s interesting, because producers come on at different times as well, so when we first started, it was Aaron Kaplan and myself and my business partner Nathan Mayfield. And so we were the e.p.s [executive producers], but then we had to find who would be our show runner, our lead writer [Barbie Kligman].

When my business partner went back to Australia, I stayed here, so Barbie and Aaron and myself and Charles MacDougall, [who] directed the pilot and he was the e.p. on the pilot, so we were all responsible for casting, finding all of the team, putting together all of the directors for the series – everything, really, putting together all of the key creatives, and then we went and we made the pilot and we were there at every moment. When the show got picked up, we brought on another executive producer, which is Tim [Busfield, who also plays John Garner in the series]. Tim is the producing director who goes to the shoot and manages it so that everything is exactly how it should be on the set and manages the directors.

AX: And what would you most like people to know about SECRETS AND LIES?

ROBERTSON: I think that SECERTS AND LIES for me is a compelling drama. It’s edge of your seat storytelling. You get to the end of the episode and it’s good television, where it’s cliffhangers and you really want to see what’s going to happen next.

This interview was conducted during ABC’s presentation day for the Television Critics Association press tour at Pasadena’s Langham-Huntington Hotel.