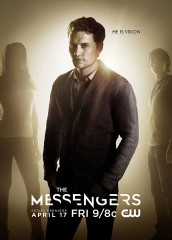 ©2015 The CW
Jon Fletcher as Joshua Jr. in THE MESSENGERS - Season 1
Interviews 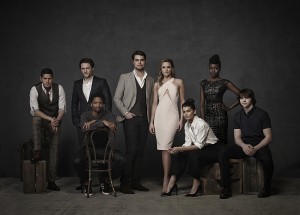 In The CW’s new series THE MESSENGERS, Fridays at 9 PM, five people who don’t know each other, including a scientist, a televangelist and a teen who commits manslaughter, are affected, then brought together, by a mysterious force that puts them on a trajectory to either save the world from the Devil – or prepare it for his reign.

Co-executive producer Ioghan O’Donnell created THE MESSENGERS; executive producer Trey Callaway serves as show runner. Callaway’s other writing and/or producing credits include the feature I STILL KNOW WHAT YOU DID LAST SUMMER and the series W.I.T.C.H., CSI: NY and REVOLUTION.

ASSIGNMENT X: When did you get together with Eoghan O’Donnell with THE MESSENGERS?

TREY CALLAWAY: That’s a great question. Eoghan wrote the pilot on spec and it got the attention first of executives at CBS Studios and then, through them, got my attention, and I immediately fell in love with the material and got together with Eoghan and immediately fell in love with him. He’s from Arkansas, I’m from Oklahoma, we literally went to the same church camp as kids. We’ve sort of come from the same area of the heartland. Once the pilot was picked up to series, we immediately set about trying to figure out how the story continues and where to go from there. So that development process took us all the way ‘til when we filled the room with writers right after the upfronts and have been at it ever since.

AX: Do the two of you have a particular division of responsibility as writers?

CALLAWAY: I’m the show runner, so I’m tasked with all of the key creative decisions on the show. I also run the writers’ room and then spearhead the production in Albuquerque. But Eoghan is the original voice of the show and it has always been our collective goal to preserve that voice and to build from that place, and so Eoghan has been instrumental in the writers’ room at every turn in helping develop these stories, and again, the two of us spent a couple of months together holed up, trying to work things out before we even got into a room full of writers, so he’s been and continues to be incredibly critical in that process.

AX: For a series that deals with angels and demons and supernatural forces, the first episode of THE MESSENGERS was relatively light on visual effects. Will the show have more or less or about the same amount of effects going forward?

CALLAWAY: The pilot’s a really good template for that, in that there will always be some supernatural eye candy that will be happening by virtue of who these people become, but it’s always going to take a back seat to the character aspects of the show. This is not to say anything against normal superhero fare, which I know is an important part of this network, and I’ve wanted to be the Flash since I was ten years old. But these are not your average superheroes and, as a result, because it is so character-based, that’s really where we live, and then there will be those moments in every episode that surprise you, that will often involve that sort of whiz-bang visual effects angle on this.

AX: Speaking of other supernatural fare on The CW, there is of course SUPERNATURAL, which also has angels and demons …

CALLAWAY: I wrote for [SUPERNATURAL] once.  I wrote a single episode [“Hell House”] for first season which spun into a series of recurring episodes – I created the characters called the Ghostfacers. So that’s how I became very close with [SUPERNATURAL creator] Eric Kripke early on, and then we worked together again on REVOLUTION last season.

AX: They have angels and demons and then there’s DOMINION over on Syfy, which is about a war of angels on Earth.

CALLAWAY: And THE LEFTOVERS, although it doesn’t [literally have angels], but it’s a spin on the aftermath of the Rapture, so it sometimes gets cited. I think what makes our series different – DOMINION is a little more science fiction, a little further in the future, SUPERNATURAL is more of a procedural in its construct. With THE MESSENGERS, again, this is really first and foremost a story about faith and about how people try to find it, struggle to find it, and the mythology, though important, is very interpretive. We look at the Book of Revelation through a twenty-first-century lens, so those who know it will recognize certain characters and certain settings and certain situations, but it’s not critical to know it at all, because again, it’s really not about the Bible, it’s really about these people trying to make sense of a new destiny in their lives.

CALLAWAY: Absolutely. That philosophy and the philosophies of a variety of other religions get reflected in the show. Because that’s what’s so important about this. There’s a brilliant Yale computer scientist named David Gelertner, who narrowly survived an attack from the Unibomber a couple decades ago. And he wrote an amazing book called DRAWING LIFE, which is a reflection on his experiences of why that happened to him. And I only bring it up because he espouses this amazing notion of what he calls “the religion of Ought.” In other words, no matter what you believe in, or whether you believe in nothing at all, there are, generally speaking, a few things that most people on Earth believe in. You ought to be kind. You ought to be loving. You ought to be tolerant and respectful. You ought to not go to war. You ought to protect humanity. Those are core values of THE MESSENGERS, so regardless of how it breaks out dogmatically speaking, that’s really where we live, is finding those common threads and then trying to work our way through them.

AX: And are there scare moments?

CALLAWAY: Absolutely. We’re talking about the Devil himself being one of our regular cast members, and his greatest strength is his ability to, regardless of what you believe in, read and understand your insecurities and then manipulate them and play on them, so there are great moments of fear that rise from that as a result, and then as I suggested, there are other figures that are inspired by the mythology who rise up that we have to do battle with, who are genuinely frightening and a very imposing force for us to contend with, so there are many thrills and chills.

AX: Are you planning to live Tweet as the episodes air?

CALLAWAY: Oh, absolutely. I’m all over that.

AX: And is there anything else you’d like to say about THE MESSENGERS right now?

CALLAWAY: One of the challenges of making a midseason series is that it’s all in the can by the time it airs, and so we haven’t had an audience. So we’re just thrilled to have a night and an air date finally, and an opportunity to share our stories with everyone who will watch.

This interview was conducted during The CW’s press day for the Television Critics Association at Pasadena’s Langham-Huntington Hotel.