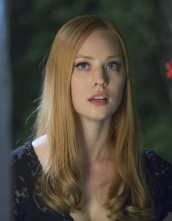 A penultimate episode with no action (albeit some sex), but much suspense 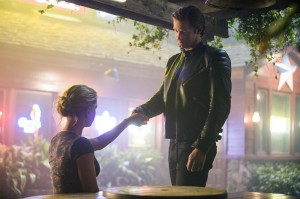 To cut to the chase, in “Love is to Die,” TRUE BLOOD’s penultimate episode, Bill (Stephen Moyer) still has Hep-V and still hasn’t met the true death. If someone could be slapped into the next world, this might happen, because when Bill can’t/won’t explain to Sookie (Anna Paquin) his suicidal decision not to drink from the antidote-bearing Sarah (Anna Camp), Sookie slaps him until Eric (Alexander Skarsgard) pulls her off.

Bill’s decision causes Jessica (Deborah Ann Woll) to ask him to release her. Bill says he’s proud of her. Jessica and Sookie are both miserable.

Sookie and Jessica go to Sam’s (Sam Trammell) home, only to find that Sam has left a note for Sookie. We see flashbacks of Sam and his very pregnant girlfriend Nicole (Jurnee Smollett-Bell) packing up and moving to Chicago. Sam invites Sookie to come visit after the baby is born. He’s left a much shorter note for Sheriff Andy (Chris Bauer), saying he resigns as mayor.

Eric goes to talk to Bill, who explains that he’s doing this for Sookie; all he has to offer her is darkness and she’ll never be free until he’s gone. Eric thinks Bill is wrong to disregard Sookie’s wishes, but still agrees to tell Sookie Bill wants to call on her. Eric flies Sookie home from Bellefleur’s and the episode ends with Bill about to knock on Sookie’s door.

What Sookie and Bill don’t know is that they’re about to get a visit from Mr. Gus (Will Yun Lee) and the yakuza. Eric returns to Fangtasia, finds an upset Ginger (Tara Buck) waiting there and finally offers to have sex with her (he’s now immune to her Hep-V status). Ginger is so excited that she climaxes and faints without Eric really doing much. Eric then goes to the basement, where he finds Pam (Kristin Bauer von Straten) tied up with a stake aimed at her heart. Mr. Gus threatens to kill Pam until Eric fesses up and admits that, yes, Sookie knows about Sarah (as Mr. Gus has figured out).

In other news, Hoyt (Jim Parrack) finally winds up back with Jess after asking her to explain why he doesn’t remember her. Meanwhile, Hoyt’s erstwhile girlfriend Bridget (Ashley Hinshaw) goes home with Jason (Ryan Kwanten) and they have an intimate chat, where Jason confesses he’d like to have kids and Bridget assures him he’s a good guy.

In some ways, “To Love is to Die” is a truly weird episode in how not weird it is. There is no action (unless we count Hoyt punching out Jason) and no gore beyond some vampire tears. For awhile, it looks like there won’t even be any sex, but TRUE BLOOD won’t go that far. It’s great to have Parrack back as the steadfast Hoyt and the reunion between Hoyt and Jessica is honestly sweet.

This is overall a dialogue-heavy, emotional episode and structurally, it seems like it would have been difficult to shoehorn in a battle scene; it’s not strictly necessary, but it just feels a little odd not to have one. This more than anything tells us that TRUE BLOOD is wrapping up.

We know Jason is a good guy, but if this is the resolution we get for him, it would have been better coming from a more established character. Hinshaw is perfectly agreeable, but Bridget has almost come out of nowhere, and her yelling at Hoyt is not quite as understandable as it seems meant to be. (There are vampires, lady, and everybody’s telling you there’s an explanation for all this weirdness; wait for it before going off the rails.)

It would have been good to see a farewell scene between Sam and Sookie, but his departure had been solidly established; having him drive off into the sunset with Nicole and their unborn daughter seems a reasonable conclusion.

We finally see that, when it comes down to it, Eric will choose Pam every time, which is as it ought to be. Skarsgard and Bauer van Straten play the showdown scene with vast emotion and nary a word between them. It’s also plain fun to see taken-for-granted Ginger at last get her heart’s desire, and Buck has a roaring time with it.

As for Bill and Sookie, there are a lot of ways things could go. She hasn’t killed him so far, but she may be when she hears his insane parochial logic, although a scene of Bill walking through the graveyard and pausing at the resting places of his mortal wife and children suggests that he may just want to revert to the man he used to be, even if it kills him.

So, where’s it all going? The finale is entitled “Thank You.” Let’s see if that’s what we feel like saying when it’s over.