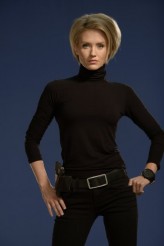 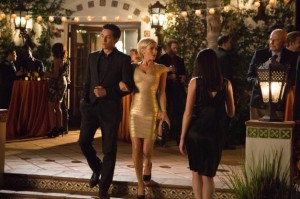 El Rey’s action/adventure series MATADOR is in its first season Tuesdays at 9 PM and already renewed for next year. In the show, DEA agent Tony Bravo (Gabriel Luna) is recruited by the CIA to infiltrate the criminal organization run by Andres Galan (Alfred Molina) – by posing as a soccer player and joining the L.A. Riot team owned by Galan.

Nicky Whelan plays Tony’s CIA handler Annie Mason. The Australian actress, who was a regular on the last season of SCRUBS and in Season 3 of FRANKLIN & BASH and can currently be seen in Crackle’s Web series CHOSEN, uses an American accent for her role. However, she speaks – very softly – with her real accent at El Rey’s portion of the Television Critics Association press tour.

AX: What would you say is the core of Annie’s character?

NICKY WHELAN: You’ll eventually find out through the season that some quite traumatizing things happened in her past, which make her so controlling and so crazy and passionate about what she does. There’s a damn good reason for that. You do get to find out why Annie is so driven about this, and especially the people they’re going after. But she’s she’s honest and she’s strong and she’s loyal, and even though she’s the boss, she loves her team. I like Annie’s character. I think in real life I’m very different to her in a lot of ways, but I like being able to play the kind of woman who runs the show [laughs].

AX: Did you always want to be an actress?

WHELAN: Well, I always wanted to be a dancer. When I finished school, I went straight into dancing full time, and then was given a job hosting sports and calling horse races and sports programs and I got straight into that when I was seventeen and did that for a solid eight years. I always wanted to do acting throughout that, but I just kept being a TV presenter and then I was asked to do NEIGHBOURS, a soap opera in Australia, and I was like, “I will take this on for sure. It’s an opportunity to act.” And the minute I started on that, I was like, “This is where I want to keep going. No more hosting – I’ve done enough of that” [laughs]. So I finally got to immerse myself in something that I’d wanted to do since I was younger.

NEIGHBOURS took me on with no acting experience whatsoever. I learned as I went along. And since coming to America, I moved out here to do a job initially and then as I’ve gone along now, I’ve been working with a teacher, so I’ve definitely been getting a lot more training as I go here, and especially on MATADOR, I’ve been working with coaches, but I wasn’t trained professionally back in Australia.

AX: In Australia, do you have a government agency that’s comparable to the CIA?

WHELAN: Yeah. Well, of course there’s a system that runs down in Australia, but obviously, in America, everything’s on a bigger scale. Everything in America is always a much bigger scale to Australia. And it’s a field that I’ve never been familiar with before, so going in to play a role where I’m the head of this department in the CIA, it’s a big challenge, because it’s a big role, and it’s very exciting for a woman to be given an opportunity to be in charge of a bunch of men. She’s a really intelligent, driven woman and considering all the other roles that I’ve usually played, it certainly stands out from the rest.

AX: Do you have to draw on something new in yourself to play somebody who’s in charge?

WHELAN: I think everyone has a different process, but I feel like this role came at the exact right time in my life. I don’t know if I could have played her a few years ago. I think I’m exactly where I’m supposed to be to be playing this kind of woman, and there’s nothing that really prepares you for it. I think it’s an internal feeling you have as a human being. You get to a certain stage in your life where you start to know yourself a little bit better, and you start attracting things into your world and you feel a bit more stable as a woman, and then, if you’re an actress, you’ll pull in a role that requires you to take ownership of who you are, and I feel like I was at that stage in my life. So it seems overwhelming and enormous to be playing this character – I’m thinking, “How am I going to convince people that I’m this woman?” But you get in there and you know your work, and I had some preparation from gun training and some bits and pieces leading up to it like that. A lot of terminology I’m only now just learning throughout the process of the character. You embrace it and it’s a feminine strength that I’m getting to bring out of myself through the character, so it’s a really interesting journey, but I think the only way I could prepare for it was to be at this stage in my life, if that makes sense.

AX: Is the American accent a separate challenge?

WHELAN: A lot of things I’ve done in the past I’ve been allowed to be Australian in, but this, it was very important that she was American. When you change the way you speak, you change who you are, so it takes a beat to find your feet when you change your accent. You don’t feel as sincere as you would if you were using, [in this case] my Australian accent, so that absolutely is another set of challenges, but I’ve really taken on the American accent and really made it part of this woman. And it’s nice having an accent, because I feel like I can shake her off a little easier at the end of the day [laughs]. 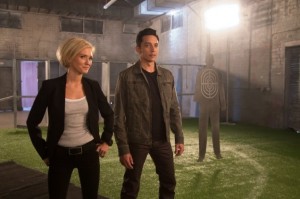 AX: Did you have any fight training for the role?

WHELAN: I’ve always been into kick-boxing and I did personal training with kick-boxing for years, and I was a dancer as well, so physically, I’m pretty good, and I’ve got an incredible stunt team around me. Before we started filming, I had some gun training with some DA guys and learned how to hold a gun. In Australia, we don’t grow up in a society where guns are allowed, and you come to America where they’re legal, so I was very foreign to holding a gun, or even shooting one, so that was an interesting part of the journey for me within itself. Guns are scary to me. Now I feel confident holding one.

AX: Did you do any research into the CIA or the DEA, those aspects of MATADOR?

WHELAN: It’s really a mixture of everything. I’ve got some friends that are in the force here in America who I spoke to. A dear friend of mine who’s a sheriff down in Orange County spoke to me about the difference between the CIA and the DEA and bits and pieces like that, and I’m certainly learning a lot through the writing and as I go along, and it’s like a whole new world to me. And we’re in the land of TV as well, so a few things are exaggerated, a few rules are broken, so we’re making it up a bit as we go along, too. That’s just more exciting for the viewers.

AX: Are most of your scenes with Gabriel Luna as Tony?

WHELAN: Most my stuff’s with Tony and Neil [Hopkins], who plays Noah, my partner. He’s very passionate about his job, but he’s also really naughty [laughs]. My character goes undercover as Tony’s agent and in that case I get to do some scenes with Alfred Molina and also I have some scenes with Tony’s family. Most TV shows, everyone stays to their area, and I’m just so lucky that I’ve got to venture out into a lot of the different pockets of the show and work with different actors, because of my character going undercover.

AX: Is it fun to play Annie when she’s playing an agent?

WHELAN: Yes, because I get to be Australian [laughs]. We change her accent back to my real accent. I didn’t know whether we were going to do that, so it’s been really fun. But again, it’s actually helped, because she has to go undercover, and hopefully in Season 2, I can go undercover more, because I’m finding other things I want to do with her.

AX: Is MATADOR all shot here in Southern California?

WHELAN: Everything’s shot here in L.A., in the Valley, and I’ve got to say, the studios are nine minutes from my house, so I couldn’t be happier [laughs]. Most of my scenes are on set in the studios. We’ve had to go out on location a little bit. We went out to Simi Valley to shoot the pilot, at one of the big mansions out there. It was spectacular, the drive out there at night. That’s what I love about California – there are so many different places. You drive five minutes, you’re at the ocean. Twenty minutes the other way and you’re in the mountains. It’s one extreme to another out here. It’s beautiful. I think we don’t realize how great California is.

WHELAN: I have a movie that I shot last year called LEFT BEHIND starring Nicolas Cage. That comes out October 3, and I have a movie I did called THE WEDDING RINGER with Josh Gad and Kevin Hart, a big comedy, which is what I’m used to, coming out in January. I’m really looking forward to seeing both of them. Both are very different, and very different roles.

AX: El Rey is a new network. Is there anything different in working for a new network versus an established one, or do you not see that side of it?

WHELAN: There’s definitely a vibe of freedom on the set, and not too many people running the show. It’s a small handful of people who are on the same page, and all of them really creative, and I feel [a sense of] freedom. And it’s exciting, it’s cool – I feel like we’re the cool kids out of all the networks, and I love that. It’s a kick-ass show and it’s cool to be part of something new, especially something so groundbreaking on so many levels.