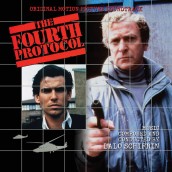 Lalo Schifrin kicks action ass with one part kung fu, and the other serious symphony 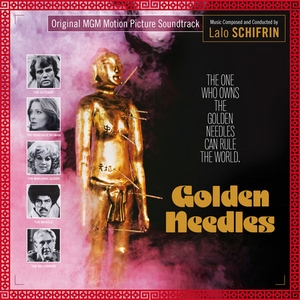 From spies to a certain magnum-blasting cop, Lalo Schifrin can be certified as one of Hollywood’s most versatile men of musical action – though it’s likely to be his lightning fists of Chopsocky jazz-Fu which will go down as his most popular score (along with Bruce Lee’s most popular film) for 1973s ENTER THE DRAGON. But perhaps an even cooler contender would be the soundtrack for director Robert Clouse’s 1974 follow up GOLDEN NEEDLES, which had seven treasure hunters of various moral shadings pursuing an idol whose “seven forbidden acupuncture points” all kick ass with Schifrin’s distinctive take on exotic East meeting pop west. With a piercing, Theremin-like effect worth a thousand Lee “kill” faces, Schifrin’s funky dulcimer theme dances about with Oriental percussion and jive bongos. Hip flutes groove with guitars and lush romance, while such oddball touches as a player piano meets in a Hong Kong alley with fuzz guitars. And when it comes to pure adrenalin the Schifrin foot-fist way, a nearly ten minute “Harbor Chase,” is an exhilaratingly virtuoso exercise in keeping a thematically breakneck combo of horns, rhythm sections and sizzling electronics veering between tingling synth suspense and 70s jazz beat-downs. It’s the next best thing to attending a jazz duel at Dr. Han’s forbidden island, and even better in many clever respects for “Needles’” CD debut that really nails Music Box’s 50th release.

Schifrin couldn’t have sounded more suspensefully different when he got to score one of his best thrillers with 1987s THE FOURTH PROTOCOL. This crackling Frederick Forsyth adaptation pitted Pierce Brosnan’s super KGB assassin against Michael Caine’s alarmed British agent, both in a atomic-fueled Cold War race that Schifrin marks with a very serious, full-bore symphonic approach that masks his more typically jazzy musical identity as well as its identity-changing villain. You know The Reds are up to no good when Schifrin’s dark Russian melodies show its face, a droll Slavic identity that inflects this crafty score with no small amount of black humor in its devilishly handsome villain’s murderous, and calculated proficiency – all as a his opponent’s noble horn tries to stop him. Schifrin also does a powerful job of conveying a sense of momentum for the antagonists to the bomb countdown finish line – with piano percussion an especially valuable asset to lead us to a thrilling orchestral explosion for the movie’s DAY OF THE JACKAL-esque showdown (for a story not so coincidentally credited to PROTOCOL author Frederick Forsyth). Long an out-of-print CD (as well as the first soundtracks put out in that format), Buysoundtrax has done a nice job of re-releasing this Schifrin collector’s prize, with always-exceptional liner notes by Randall D. Larson that gives a thorough dossier of one of Schifrin’s most straight-laced action scores.

Click on the link to Purchase the GOLDEN NEEDLES soundtrack

Click on the link to Purchase the FOURTH PROTOCOL soundtrack