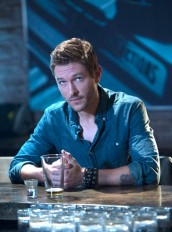 The actor talks about playing a father on the run 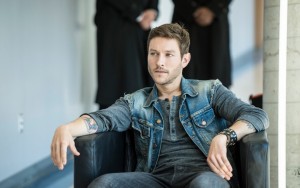 Michael Graziadei stars as Kyle Walker in THE LOTTERY | © 2014 Lifetime

In Lifetime’s new series THE LOTTERY, created by CHILDREN OF MEN screenwriter Tim Sexton, women around the globe have become infertile. The last human infants were born six years ago. There are now a hundred embryos that are possibly viable; the U.S. President has declared a lottery to determine who will get to carry the children.

Meanwhile, Michael Graziadei’s character Kyle Walker is the father of Elvis (Jesse Filkow), one of the world’s few six-year-old children. The government wants Elvis, but Kyle is determined to keep his son, even if it means being on the run.

Graziadei, who went to high school in New Hampshire and was originally born in Germany, spent nine years playing Daniel Romalotti on THE YOUNG AND THE RESTLESS. He’s also had arcs on 90210, AMERICAN HORROR STORY, CRASH and THE SECRET CIRCLE. He’s present at an event Warner Brothers Television holds on the Warner Brothers Burbank lot for the Television Critics Association, where he talks about playing the desperate father of a rare son.

AX: In THE LOTTERY, your character’s son is …

MICHAEL GRAZIADEI: One of the youngest and last-born children in the world.

GRAZIADEI: Single father. Wife is completely out of the picture.

AX: Is Kyle’s sole purpose to keep his son?

GRAZIADEI: My character’s sole purpose, his driving force behind everything he does, is just for the welfare of his child. I think in the beginning, you’ll see that Kyle doesn’t care about anything except his child. I don’t know where the journey’s going to take him – people are going to have to tune in to see that – but we’ll see how wrong everything goes. It’s wide open for him to go anywhere.

AX: What was Kyle doing before the crisis hit?

GRAZIADEI: Well, he works a little bit with computers, but if people tune in and see the premiere, they’ll see that Kyle’s got a few other professions going on as well.

AX: How would you describe him as a person?

GRAZIADEI: I think Kyle’s just a very serious, no-nonsense kind of person. He’s there for his kid, he understands his child’s in a world where everybody’s got [Elvis] under a microscope, and [Kyle] just wants people to leave [Elvis] alone and let him be a kid, let him be a child, let him grow up however normal he can grow up.

GRAZIADEI: It’s challenging to play. Everything they write for us is challenging. That’s what makes it exciting to do on a daily basis.

AX: Where are you filming THE LOTTERY?

GRAZIADEI: We’re filming in Montreal. They do a lot of [location doubling for] Washington, D.C.

AX: Are you a father in real life?

GRAZIADEI: I am not a father in real life. I have a dog, a beautiful pit bull. She’s three years old now. I rescued her two years ago, and I have a goddaughter. So I know my way around taking care of children, I guess. 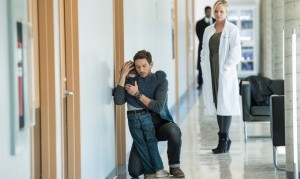 Michael Graziadei stars as Kyle Walker in THE LOTTERY | © 2014 Lifetime

GRAZIADEI: I would do anything for my dog.

AX: How is it acting opposite Jesse Filkow as your son? Do you have many scenes with him?

GRAZIADEI: I act opposite him all the time and he is absolutely amazing. He’s a remarkable little actor who really takes it seriously and always shows up well-prepared and just ready to go.

AX: CHILDREN OF MEN, which was written by THE LOTTERY creator Tim Sexton, also dealt with a worldwide human infertility crisis, albeit in a different way. Had you seen that movie?

GRAZIADEI: I’ve frequently seen CHILDREN OF MEN. It’s one of my favorite films. So it was kind of a no-brainer when this project came along and Tim Sexton was the creator to want to hop on board and try and do it justice.

AX: Is speculative fiction a genre that you enjoy recreationally?

GRAZIADEI: Absolutely.  I enjoy every kind of genre out there. But anything that gets people thinking and questioning what we’re doing today, what it’s going to mean tomorrow, yes.

GRAZIADEI: I have no time for anything else right now. I’ve been completely focused on this since we started working on the pilot.