Home » In Your Eyes soundtrack review 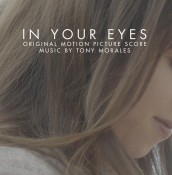 CD Review: IN YOUR EYES soundtrack

A guitarist and arranger for such composers as Brian Tyler and Harry Gregson-Williams, Tony Morales has been impressing with his suspenseful, action-heavy scores for THE BAG MAN and ENEMIES CLOSER, while also netting an Emmy nomination for co-scoring the hellbilly hootenany of the HATFIELDS & McCOYS along with John Debney. Perhaps that’s why Morales’ romantic score for IN YOUR EYES  sounds like it could be taking place during a Van Damme face-off, as well as a mesmerizing mind-eye bridge where boy meets girl via psychic connection.

Morales’ programming chops, not to mention melodic talent, add much musical atmosphere to this well-reviewed Joss Whedon-written film that has the distinction of debuting on Vimeo for 5 semolians a shot. But Morales’ score definitely has the production, and melodic quality of a theatrical film as he uses guitar licks, piano and rhythmic samples to conjure the kind of indie sound that attracts hip younger audience (not to mention Whedon-ites). But there’s also a strong orchestral backdrop that really gives the score emotional depth, along while a haunting female voice that gives dramatic urgency to the romantic suspense. The other side of this often beautiful, otherworldly spell is a strongly propulsive, drum-heavy drive that could easily be dropped into a BOURNE-ish spy chase, an element that makes this score work just as well for action groove fans. Given this involving, exciting and nicely emotional soundtrack that still fits the fantasy bill, the sky continues to be the limit for Morales’ EYES, and ears.

Click on the link to Purchase the IN YOUR EYES soundtrack