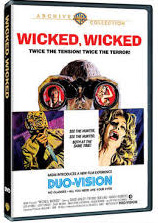 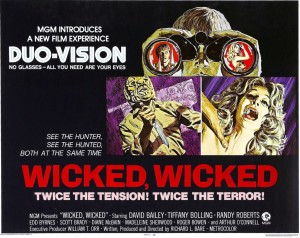 One of the great things about the Warner Bros. Archive Collection is the company digs up some truly obscure films to put out On Demand. Whereas the profit margin for a standard DVD or Blu-ray release would not be worth it, this formula seems to benefit interesting and bat-crap crazy films that would otherwise gather dust on the shelves.

WICKED, WICKED is one of the more interesting Warner Archive releases as it’s a thriller filmed in the one-time only format dubbed DUO-VISION.

It makes sense that this hasn’t seen the light of day on DVD or VHS, because it employs a split screen technique that director Brian DePalma has used intermittingly in his films, but not for an entire film.

In fact, WICKED, WICKED, in many ways was ahead of its time, as this split screen concept was used in a much better fashion on the TV show 24 many decades later.

Writer and director Richard L. Bare tries to create a story that would benefit from this kind of storytelling. The notion, according to the trailer is to show the story from the killer’s perspective and the victims. However – linking two different angles of the same scene is a misnomer, because the film veers from that formula throughout. Often times, a character will be talking about their past and we’ll see what “really happened” in the second screen. The killer’s past is also revealed in this way as well.

The story is set at a resort where a killer has managed to kill off blondes without anyone noticing. His deeds catch up to him when a killing gets botched and the hotel detective starts closing in.

There’s a psychedelic edge to this 1973 production that at times makes it feel like watching someone’s bad drug trip, but even at its worst, the film is captivating on so many levels.

On the positive side, the technique is actually rather ground-breaking and utilized by a filmmaker with a little more imagination, this could have been a really fascinating new storytelling tool. The early killings are actually rather creepy and well-executed, especially as the killer tries to get away. This kind of split action really amplifies the suspense in great ways.

That said, the terrible mask the killer wears is shot in stark, direct light – which makes it look more goofy than scary, even though it is a pretty creepy looking mask. The musical numbers on the stage of the resort feel out of place and there are too many of them. The movie plays up its comedic elements more than the suspense at times, which is a disservice to the set-up. And while it’s original, the idea of using the organ music from the 1925 silent film PHANTOM OF THE OPERA is bizarre and distracting at times. While it works for a silent film, it stands out like a sore thumb in a modern talky film. If the movie were as moody as PHANTOM, then maybe there would be a kinship, but it’s over-used too even though it adds to the film’s kooky nature.

WICKED, WICKED can’t make up its mind what it wants to be, but it’s also a fun, deranged little thriller that is worthy of MYSTERY SCIENCE THEATRE 3000 ribbing. Get some popcorn and beer, invite some friends over and witness this fascinating train wreck of a movie. You won’t be disappointed, but you will wish someone would resurrect DUO-VISION and do it justice.

Related:Blu-ray Review: THE DARK HALF