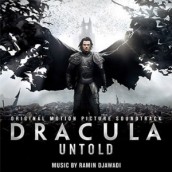 Between the sword and sorcery that helps seat the GAME OF THRONES to the tongue-sucking plague brought on by THE STRAIN, Ramin Djawadi has been having a hell of a time giving eerily adventurous production value to genre TV. Now with DRACULA UNTOLD, Djawadi gets to unleash a truly epic supernatural score that bat wings its way to the top of his work. Vlad the Impaler gets his most emotionally vulnerable treatment a la that other not-so villainous revisionist movie MALEFICENT the horror springing from the character’s humanity. Djawadi powerfully responds by giving Dracula a memorably bold, darkly heroic theme that becomes damn near operatic as he luxuriates in his satanic superpowers while trying to be on the side of the angels. Where Djawadi’s music is mostly restrained (though the shackles are definitely coming off) on GAME OF THRONES, DRACULA UNTOLD gives the composer the chance to really go for the period sweep with this neck-kissing cousin to that HBO hit, evoking a real-world Dark Age atmosphere for royalty-ruled Transylvania by using such Eastern European exotica as cimbaloms, yet sure to make the sound contemporary with the kind of propulsive, rock rhythms that are staked into today’s action scores.

Especially effective is Djawadi’s tragic, music for Dracula’s immorata, a lush, pained feeling that mightily abets the character’s tragic nature, and righteously twisted vengeance. Where Dracula always talks about his nobility, this is pretty much the first score to actually play that blood-splattered lineage for all of its valorous, sword-swinging worth. When he truly assumes his mantle as the Prince of Darkness, Djawadi’s terrifically exciting use of a percussive, full-blast symphony shows off an orchestral power that’s rare for any “horror” score these days. It gives DRACULA UNTOLD a pretty great musical shove off for what Universal hopes will be the launch of an action-oriented monster line. This thrilling score gives us high hopes for that said franchise will be calling on the children of the old-school orchestral night for its supernaturally thematic panache.

Click on the link to Purchase the DRACULA UNTOLD soundtrack