The actor talks about the new 9-1-1 spin-off 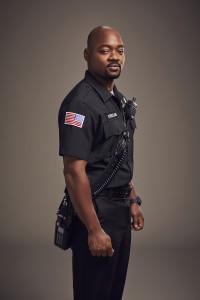 Brian Michael Smith plays firefighter Paul Strickland, who has moved to Austin in order to be part of Station 126. Smith, originally from Michigan, has been a series regular on QUEEN SUGAR, THE L WORD: GENERATION Q, AFTER, and the Web series EASY. Smith also previously played a firefighter in an episode of DETOUR.

ASSIGNMENT X: Talking with Jacqueline Toboni about her work in THE L WORD: GENERATION Q and EASY, she was saying how good you were in those series.

BRIAN MICHAEL SMITH: Oh, my goodness! That’s so sweet. I think Jacqueline does such a great job on THE L WORD. That’s a high compliment, coming from her.

AX: THE L WORD and EASY are both fairly relationship-oriented. Had you done heavy action roles before 9-1-1: LONE STAR?

SMITH: No. This is an amazing experience for me, because I’ve always been interested in action-oriented shows. A lot of the shows that I’ve been doing have been more character-driven, and conversational studies. And so adjusting to the pace and the physicality of it has been a challenge, but very exciting for me, as someone who’s an athlete and also an actor.

AX: In scenes where you as part of a group of firefighters all have to do an action together, like dealing with the fire hose, is that like doing a big choreographic dance number?

SMITH: It really is. It feels like a choreographed dance, but it also feels like we’re working together as a cohesive unit and a squad. And I feel like it was moments like those that allowed for us to really connect, and become as close as we’ve become, working together. And it’s reflective of what we saw when we did our training with the actual firefighters, with the fire station training. They really listen to each other, they believe in each other, they know that they have each other’s backs, and they know what to do on the scene. So you just have blind trust for the person standing next to you, which I think is really refreshing, and makes the job exciting.

AX: Your fire chief, Owen Strand, who is played by Rob Lowe, has an obsession with skin care, which he shares with the team. What does your character Paul think when the captain starts talking about skin care?

SMITH: [laughs] I think my character didn’t know what to make of it, but he was down, because he’s compelling, he makes a very compelling case for why he does a skin care regimen. So my guy Paul is like a guy’s guy, and maybe thought that he wouldn’t be able to do those sorts of things, because they might alert people to him being trans-experience [Paul is female-to-male transgender, as is Smith]. But to see someone who respects give this much care and impetus to his appearance makes him feel like, “You know what? I can let my guard down a little bit and I can trust this guy.”

AX: How much does 9-1-1: LONE STAR deal with Paul being transgender?

SMITH: I think the way this show chose to explore it is in a way that is authentic to what would be this character’s experience. When it comes up, it comes up. And it doesn’t have anything to do with the moment, or with the job, or that particular part of his character. It doesn’t come up. Nothing like that, or my own experience as a trans man where, unless it has something to do with what’s happening, I don’t talk about it. It’s just another aspect of who I am, another aspect of my character.

AX: Are you doing a Texas accent at all?

SMITH: No. Luckily, my character is from Chicago. I’m out of the Midwest, too, so I don’t have to adopt any kind of Texas accent, or anything like that. So it worked out kind of nice. 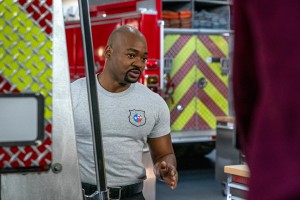 AX: In reality, are there a lot of firefighters who relocate for work?

AX: I know that a lot of U.S. firefighters went to Australia, to help with the devastating wildfires there …

SMITH: Yes. Which, thank God that they’re there to work on that, because it’s literally catastrophic, what is happening to the wildlife there and to the people – I think they’ve lost over thirty people, and over half a billion animals, so I’m really, really impressed with the bravery of the people who are there, and the people who know how important it is to go out and to try to do something about that.

AX: Have you had to deal with the wind machine yet, for a hurricane?

SMITH: Oh, my God [laughs]. The rain machine is the bane of my existence. We had to do a scene in the rain, and at first, it was exciting and exhilarating, because it really pumped up the adrenaline. But it gets cold at night, and when that cold water gets to those turnouts [firefighter uniforms], you start to feel it. If I don’t have to do another rain machine in my life, I think I’d be a happy guy.

AX: How is it dealing with the firefighter gear? Do they make the gear for the actors any lighter than real firefighter gear, or are you actually having to wear and carry all that weight?

SMITH: No, we have to put the gear on, and the tanks are not always full of air, so that helps take down some of the weight, but when we put those packs on, we are feeling a good thirty pounds of weight on there. And it can be something. The helmets also have a lot of weight to them, too, so you get a taste of what the real first responders have to deal with.

AX: So, in real life, are you going to a chiropractor to help with that?

SMITH: Oh, yeah. I’ve got a standing appointment at Massage Envy, so I make sure I do my massages, and I’ve been doing a lot of personal fitness training, actually, just to stay in shape.

SMITH: I wasn’t able to go out to the location shoot, just because of the timing of the episodes we were filming, but a bunch of the cast got a chance to go, and hopefully, that’s something we can do in future episodes. 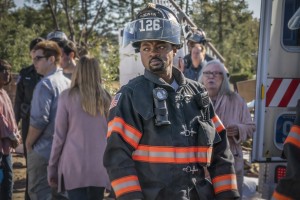 SMITH: No, I hadn’t. And since GLEE, I was such a fan of the authentic representation that I’d noticed in Ryan Murphy’s shows, especially with POSE, so I had been looking for an opportunity to work in this universe, and to be able to do it in a way that brings my own personal mission, my own creative mission, and it’s like my own joy in doing physical work, all together at the same time, is like a miracle, and just a dream come true for me.

AX: Bex Taylor-Klaus, who is on DEPUTY, was saying that you both are part of the Trans Masc Cohort …

SMITH: The 50/50 By 2020 Initiative has a cohort for trans-masculine actors, writers, producers, show runners and whatnot, to bring us all together, because we may know of each other, but we might not necessarily know each other, and sometimes it’s helpful to be in the same room with people who are of your experience, and you can share your resources, and share your experiences with one another, and help to improve the reputation that we see onscreen and behind the camera, and just provide support for each other.

AX: So it’s a community-building organization …

SMITH: Yeah, with the emphasis on increasing and improving representation into the next decade.

SMITH: That people put a lot of really hard work into it, and we love it, and we hope you love it, too.