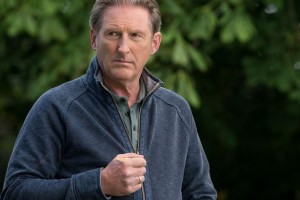 Season 2 of Acorn TV’s BLOOD, created by Sophie Petzal, premieres on the cable and streaming service on Monday, March 9. In Season 1 of BLOOD, which originally premiered in 2018 and is also available on Acorn, we meet the Hogan family. Patriarch Jim Hogan, played by Adrian Dunbar, is a well-liked doctor with a small-town practice in County Meath, Ireland. Older daughter Fiona (Grainne Keenan) is uptight, rigidly loyal to her father, with children of her own. Son Michael (Diarmuid Noyes) lives unhappily in his parents’ house, sure he can never please his father. And daughter Cat (Carolina Main) has fled to the big city. Cat returns home upon the death of her mother Mary (Ingrid Craigie). Cat knows that Jim lied about events in her childhood, and suspects that he’s lying again now.

While Season 1 of BLOOD isn’t exactly RASHOMON – the things that happen remain unchanged – our interpretation alters radically, depending on whose perspective we’re getting. This means that some of the actors, Dunbar especially, must alter their performances depending on a specific scene’s point of view. Season 2 of BLOOD still focuses on the Hogan family, but this time it’s Fiona’s secrets that come to the fore.

Dunbar, originally from Enniskillen in the North of Ireland, is appearing in his sixth season of the popular British police drama LINE OF DUTY. Dunbar’s many other film and TV credits, stretching back to 1980, include MY LEFT FOOT, HEAR MY SONG (Dunbar also co-wrote the BAFTA-nominated screenplay with director Peter Chelsom), THE CRYING GAME, CRACKER, RICHARD III, THE LIFE AND ADVENTURES OF NICHOLAS NICKLEBY, and THE HOLLOW CROWN.

ASSIGNMENT X: This is going back a bit, but that double episode of CRACKER was excellent …

ADRIAN DUNBAR: Yeah, that first episode of CRACKER, that really was a nice part. I got to put a lot of my own stuff into that with [CRACKER star] Robbie [Coltrane]. Michael Winterbottom directed that. I loved that episode. I loved playing that part.

DUNBAR: Yeah, it was. It was one of those shows that was a bit of a groundbreaker, in terms of the central character who had lots of problems, marriage problems, drinking problems, all that kind of stuff. 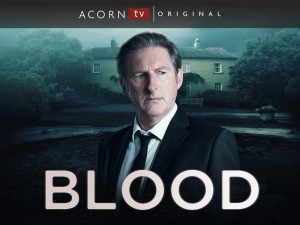 AX: Which seems to be a theme in BLOOD, where all of the characters have lots of problems. Your character Jim Hogan tends to be quite different, depending on how he’s being perceived and who’s doing the perceiving. Did you know from the specific scenes, “All right, I should play him this way or that way,” or was that something that you had to figure out whose point of view it was to know how to play the scene?

DUNBAR: Well, the interesting thing is, of course, that I knew what happened. I knew why he took the actions that he took. So therefore I was able to see everything, and everything that comes at him, through that filter. Because what had happened in the past. And now everybody’s trying to come to terms with what’s happening in the present. So I was trying to do what any person would do, I think, which is, try and keep the family together, and I couldn’t tell anybody what I had done, because obviously who was going to understand? That was something he couldn’t tell anybody. So he was all the time just trying to be as good as he could be, but that was being misconstrued. His actions looked like he was covering up. So I was able to play everything like that, from the basis of knowing what I know, but not being able to tell. And also, you want to be very honest with that, so when the audience get to the final episode, the audience can rack back and go, “Oh, right, okay. I see. I get why he did what he did, and how he approached those things, and why he did everything like that. It looked so incriminating, and yet all he was doing was trying to hide [one thing].” So there’s a logic to it.

DUNBAR: Well, it’s a very strange thing when you decide to shoot something from someone else’s perspective. And I don’t think that anybody involved in it understood the position they were putting me in as an actor. Because although I was playing nearly the leading part, everything I was doing was being seen in a particular way. So I had to find a way through that, so that in the end, when the audience looks at it, they go, “Oh, I see. I get it. That’s why he did that.”

But it was a very, very difficult shoot. You’re absolutely right in identifying that as a problem. Not a lot of people understood that. Even the people who were shooting it, and who were making it, really didn’t realize why I had to work hard with every scene, working it so that it worked both for them and for me. They were seeing it from her perspective, and they were shooting it from her perspective, and they were going to edit it from her perspective, and I’d be saying, ‘Yep, but I’ve got to change this here, and this is going to go like this.’ So I had to do a lot of work on every scene, so that I knew, when the audience, at the end of the day, racked back and thought about it, that they could see that what I was doing had a logic to it.

AX: Were you involved in any script changes?

AX: Season 1 of BLOOD had what could have been a definitive finale. When Season 1 ended, did you think, “Oh, I’d like to know what happens next with these characters,” or when they told you there would be a Season 2, did you go, “Season 2? What???”

DUNBAR: Yeah. I was thinking, “Where are we going to go with Season 2 of BLOOD? Where do we start from?” I mean, I kept thinking that at the end of the first series that we should put something in that allows us to think, “Oh, Season 2’s going to come.” But you just thought, “This guy’s going to get caught, and he’s going to get put in jail.” It’s illegal, what he did. But they cleverly decided to do a time jump. Season 2 starts over a year beyond when the incident happened, when the death occurred, so loads of things have changed. I think that’s useful sometimes for a series.

But as regards where it goes, and who it focuses on, that’s very clever. Sophie has decided to focus on the other daughter, and her story, with this one. So you’re seeing different elements of the family, and the father trying to deal with it. And I’m hoping that our audience is going to stick with it.

AX: Does Season 2 of BLOOD have mystery elements at all, or is it strictly a family drama at this point?

DUNBAR: I’d say it’s a mixture of that. It does have external mystery to it, but it’s still very much located within the family, and the things that happen within a family, and how that dynamic plays out. There are problems still with his son, his son still doesn’t like him for what happened; his daughter is hiding a secret that she can’t tell him about. So [Jim Hogan] is not in possession of what’s happening, really. So that leaves him to do a lot of stuff that maybe he wouldn’t have done. But the character is building, the character is not allowed to practice as a doctor anymore. He’s not really struck off [had his medical license revoked], but he can’t get a job, and he’s finding that really frustrating.

DUNBAR: I hope so. I really hope so. If you talk to Sophie today, can you say, “Please, Sophie”?

AX: You often work in England, and use an English accent. So is it a relief, or is just mundane for you, to be working in Ireland and using your own voice?

DUNBAR: I think for any actor to use their own voice is always preferable. It’s nice sometimes to escape. It’s an escape into another accent, to be somebody else in another accent. But it is a relief to work in your own voice, and I do like working in Ireland. We shoot LINE OF DUTY in Belfast. So that’s kind of my home city. So I really enjoy those things, I enjoy playing characters that are close to home.

AX: And what would you most like people to know about BLOOD the series?

DUNBAR: Well, I’d like them to know that it’s a really interesting drama, in that it goes against a whole lot of tropes that people think you need [in a mystery]. It’s shot during the day, it’s the countryside, it’s a middle-class family. It’s got lots of things that people think aren’t kind of trendy or hip, and yet it seems to work, because we’re interested in the family dynamic.