The season ender is here for the Fox Mutant Marvel series 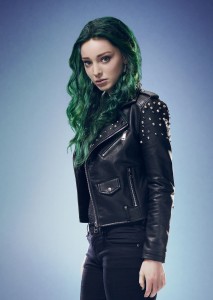 In Season 2 of Fox’s THE GIFTED, which has its finale Tuesday, February 26, the characters played by Emma Dumont and Grace Byers have gone on quite a journey together. Dumont’s Lorna Dane, aka Polaris, has inherited the metal-manipulating powers of her father, the infamous (though never directly-named) Magneto. Lorna has also inherited his distrust of humans. At the end of Season 1, then-pregnant Lorna left her lover and the Mutant Underground to join up with the militantly anti-human mutant group the Inner Circle. Byers’s Reeva Payge, who can kill with her voice, welcomed Polaris as mutant royalty. However, Lorna has become disillusioned with Reeva’s methods and rejoined the Underground, setting up a final clash.

Both actors talk their characters and where Season 2 of THE GIFTED is headed for its climactic episode.

GRACE BYERS: [laughs]. Yes. Karma came and got her good.

AX: Did Fox say to you at the time, “Okay, so you’re being written out of EMPIRE, but we’d like to find something else for you to do …”? Because in viewer terms, you went straight from EMPIRE to THE GIFTED.

BYERS: Oh. No, that wasn’t a part of the conversation, but luckily, shortly after, the role in THE GIFTED came up, and they really thought of me for that one. And they were like, “You know who might be really great for that?” And so that was really wonderful to be thought of.

AX: Do you see any similarities between Anika and Reeva? Anika seemed to be much more driven by her male hookups, whereas Reeva, whatever you think of her, is certainly her own person, one hundred percent.

AX: Lorna starts Season 2 pregnant, and then goes through childbirth, where her powers are out of control and knocking over buildings. How was playing pregnancy and childbirth and motherhood?

EMMA DUMONT: Terrible! No, I’m kidding. Playing motherhood has been amazing, the pregnancy was very interesting, and very cool to do, because it’s something that not only has never happened before on TV, but something that doesn’t exist – a mutant labor. Nobody has seen a mutant delivery [laughs]. This one tore an entire capital down and caused a blackout. So yeah, that was very dramatic, and a lot of work. We actually did a whole day of just that scene, because it needed a whole day, just for itself, and it was great.

AX: If you ever experience childbirth in real life, do you think it will be a letdown after that, like, “Wait, the building isn’t falling over”?

DUMONT: Yeah, probably a letdown. I think after that, I’m prepared for anything, definitely. “Nobody’s dying because I have my metal around me?” I think I’m good [laughs].

AX: Some of the mutant characters have powers that are created on set with practical effects, like throwing cars around. Reeva’s powers are all added with CG, so did you want to know what they looked like or sounded like onscreen, and did you go, “Now, how do I play this, because it’s not something I normally do?”

BYERS: Yes. I had a lot of questions. I was like, “What kind of sound does she make? Is it going to affect the way I open my mouth? Do I make an ‘ah’ sound, or an ‘eee’ sound? What does this look like?” I never really knew what the sound sounded like, until I saw the very first episode [that included Reeva]. And so that kind of informed how I wanted to move forward with assuming that physicality. 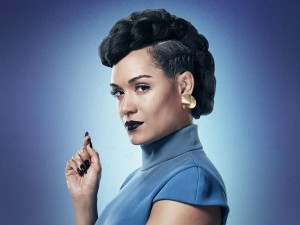 AX: Have you had a character like this before, where so much of it is uncharted territory?

BYERS: Not in the mutant world, no. Of course, the fact that she has superpowers and all of that, that definitely puts her in a different category. So that was really fun. She’s not human. And so it was about finding ways in which to make her feel a little not-human, so I chose a little bit of a robotic, stoic and sterile kind of approach to her, just to remind people that she really isn’t human, although she looks it.

AX: Did you have any input into Reeva’s look? It’s very striking.

BYERS: I did, I did. We had some great conversations with hair and makeup. They kind of tossed a few ideas my way, and the head of hair and makeup, we had some really intense conversations about how we wanted her to be just different than any character we’ve ever seen on television, in a sense, cold and striking, and even her hair, her long, braided hair, we wanted it to be like a concerted effort for her to try to rein in the chaos, and make it more constricted, and more controlled. And so I think you saw that reflected a lot in her looks.

AX: How much do you think that Reeva designed the Inner Circle headquarters?

AX: Has it been fun or tricky playing all of the subterfuge and the mixed loyalties, because in first season, Lorna seemed very sure of what she thought, and in this season, she’s sort of, “Well, I can kind of see Reeva’s point, but I can kind of see Mutant Underground’s point, and everybody’s doing horrible stuff …”

DUMONT: Yeah, exactly. It’s funny, because everyone asks that. Everyone says, “She doesn’t really know what she wants, does she? She’s going back and forth.” And funnily enough, the thing about Lorna is actually, nothing has changed about what she thinks. She thinks the same things in Season 2 that she thinks in Season 1, that something needs to be done, but in the first season, the only option she had was the Inner Circle, the only option she had was going with the [telepathic triplets of the Inner Circle] Frosts, because they were the only people that would do anything about it. So I don’t think her opinions, or let’s say her political views, have changed, really. I think she’s just realizing that there’s maybe more at stake and the Inner Circle isn’t what she thought it would be.

AX: Does Reeva actually like Polaris, or does she just like Polaris’s name value in the mutant community?

AX: Do you think Reeva feels real friendship for anybody, or does she look at everybody as, “I’m only going to be nice to you as long as I’m certain you’re doing what I want you to do”?

BYERS: We’ve definitely seen a friend that she has had, and we saw what happened to that friend, so I don’t think that she is opposed to having friends, I just know that there’s a part of her that feels like, if she gets too close, then there’s a possibility that she might lose them. Whether they have to be sacrificed, or whether they happen to die because it’s an unfortunate world that we live in, I think there’s a fear with her getting too close to anybody.

AX: There are a lot of factions on THE GIFTED this season. Would you want Lorna to go form her own faction?

DUMONT: There are so many factions, I can’t keep track of them [laughs]. Okay, selfishly, as Emma, as a fan of the show, I obviously want her to go back with the Mutant Underground, because that’s where the love of her life [Sean Teale’s character Marcos/Eclipse] is. I mean, that’s her soul mate. But for her activism, I want her maybe to start her own group. Because her opinions lie somewhere in between Mutant Underground and Inner Circle.

AX: Speaking of factions, before the end of the season, are we going to find out more about the unusual situation between Reeva and the anti-mutant Purifiers?

BYERS: I think you absolutely will. I think a lot of your questions will be answered. I think some of the answers that you will get will absolutely shock you. Her vision remains the same. That’s the one thing to remember, for sure.

AX: Amy Acker plays Caitlin Strucker, one of the few human main characters. While she doesn’t have any scenes with him, Acker’s real-life husband, James Carpinello, showed up this season as Inner Circle recruit Max. How was it playing scenes with him?

BYERS: So much fun. Amy and I were just talking about it tonight, and we both were like, “Oh, my gosh.” We wanted to work together in that capacity, and he was a lot of fun.

DUMONT: Oh, my gosh. James is a peach. It’s so funny, because the character he plays on the show is so opposite of what he is in real life, and he plays such a grimy, not-a-good-guy, kind of a sleazy guy on our show [laughs]. It’s so weird to see him – because I’ve known him since we did the pilot, of course, because he’s married to Amy, and he’s such a lovely, sweet, amazingly talented guy, so talented that he can play these scumbags. So it’s been great.

AX: Not that one is better than the other, but can you contrast the experience of working on EMPIRE and of working on THE GIFTED? I mean, obviously, on EMPIRE, you met your real-life husband, Trai Byers, who plays Andre Lyon …

BYERS: Yeah, and they asked me this [earlier] as well. It’s so hard, because EMPIRE was my very first introduction to television, so there’s nothing that can really replace that. But the cast of THE GIFTED, they’ve been so welcoming, and so loving. There was a little trepidation, coming into the second season, where everyone had already created a connection. So it was like, “Oh, will I be able to share in that?” And they have done such an amazing job of making me feel like family, so it was really great seeing everybody tonight. So that has been a real treat.

AX: Prior to EMPIRE, was your background in stage?

BYERS: Yeah. I have two degrees, they’re in theatre, so definitely lots of stage, and EMPIRE was my first TV role. I had done a couple of shorts, and I had done some commercial work as far as camera was concerned, but definitely more theatre/off-Broadway-type stuff.

BYERS: A few that are in the wringer. Hopefully, I’ll be able to talk about them sooner than later.

DUMONT: In April or May, I’m going to Dublin to shoot a Rob Cohen film. It’s going to be called RAZOR. It’s based on an indie comic from the ‘90s. 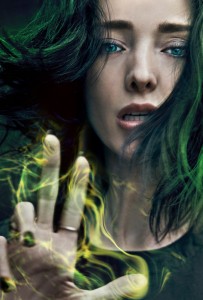 AX: Have you worked in Ireland before?

DUMONT: I have not worked there. I’ve been there for a vacation, but I’ve never worked there or been there for a long period of time. So I think it will be really fun. It’s really action-heavy and stunt-driven, so I’ve been doing a lot of Krav Maga training and working out and getting ready to go try that, and do that adventure. It’s great, because she’s also a heroine, as Lorna is, but she doesn’t have any of the superpowers or any of the gifts, if you will, that Lorna has. She’s just a human who has to battle people in hand to hand combat.

AX: And what would you most like people to know about the end of this season of THE GIFTED?

BYERS: That it’s really going to have you on the edge of your seat there. I think that a lot of your questions will be answered, and I think that what’s going to be really interesting is that everyone’s going to go head to head, and toe to toe, before the season ends.