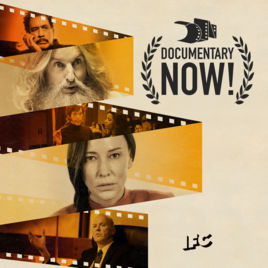 Urbaniak has appeared on and off Broadway himself as an actor. In Los Angeles, he worked onstage with THE THRILLING ADVENTURE HOUR. Urbaniak’s television credits include recurring roles in DIFFICULT PEOPLE, APOLLO GAUNTLET, REVIEW, AGENT CARTER, H+, THE OFFICE and HOMELAND; his feature work includes DRONES, SWEET AND LOWDOWN, NO SUCH THING, LEGALLY BLONDE 2, ACROSS THE UNIVERSE and REBEL IN THE RYE.

ASSIGNMENT X: Had you worked on DOCUMENTARY NOW! before?

JAMES URBANIAK: Just this one. But they knew me, and when they’re developing [episodes], they’ll do table-reads of the scripts, and so they used to call me in just to help out to read characters when they were just doing readings and working on the scripts. So I’d come in a few times to do that, and then I knew John Mulaney [one of DOCUMENTARY NOW!’s writers/producers/actors] a little bit, and then when this came up, they just thought of me for this episode, which was a good idea. They knew it was a good fit.

AX: At what point in the life of DOCUMENTARY NOW! did you start doing table reads with them?

URBANIAK: I think it might have been the second season. Because I was in New York shooting DIFFICULT PEOPLE, Julie Klausner’s show, and Fred Armisen had done some guest parts on that, and John Mulaney had been on that, so I met those guys. And Mulaney brought me in, just knew I would be a good fit for reading certain different characters and things.

AX: So it’s sort of the IFC comedy community?

URBANIAK: Yeah. And when I would go and do those readings, and hope that they would put me in an episode sometime [laughs]. I didn’t push, but then this came up, and it was the perfect offer.

AX: Is your character Howard Pine essentially a parody of Harold Prince?

URBANIAK: One hundred percent. Yes. I’m Hal Prince, Mulaney is Sondheim, Taran [Killam] is the producer [within “Cast Album: Co-op”]. As I’m sure you know, Pennebaker made a one-hour film about the recording of Sondheim’s COMPANY cast album. So it’s based on that.

AX: Did you look at the real documentary to get a sense of what it’s like?

URBANIAK: Oh, I sure did. I’d heard of it, but I’d never seen it before I was offered this, and it’s fantastic. Anyone who sees the DOCUMENTARY NOW! version might think, “Well, that’s a very funny, somewhat hyperbolic version of New York theatre people from forty years ago.” And if you see the original, you’ll see it’s barely a parody [laughs]. The original people in the documentary are so colorful, and kind of hilarious.

AX: Are you worried that Harold Prince won’t hire you if he sees “Cast Album: Co-op”?

URBANIAK: [laughs] I just want him to see it. I hear tell that Sondheim and Prince have heard of it. And I know they’re doing a screening in New York, where they’re inviting D.A. Pennebaker. I think Sondheim was almost going to come, but he wasn’t able to, but I hope they see it.

AX: Is there a particular key to playing a real Harold Prince, or any real person, as opposed to inventing a character altogether?

URBANIAK: I’ve done that a handful of times, where I’ve played real people. I played Robert Crumb in the movie AMERICAN SPLENDOR; in an Al Pacino HBO film called YOU DON’T KNOW JACK, about Jack Kevorkian, I played a real journalist from Detroit. Two things are happening. You want to honor whatever qualities the real person might have, but then you’re also playing the character. Even if they have that person’s name, it’s a character in a film with their own concerns. So it’s kind of a balance between fictional character and qualities that a real person has.

AX: What are the concerns of your Hal Prince/Howard Pine?

URBANIAK: Well, he’s very peripheral in the Pennebaker documentary, but he has the quality that Sondheim has and that the producer has in the original. They’re all New Yorkers of a certain generation. There’s a certain old-school, refined New York accent [he does the accent] they all have. And they all project great confidence in what they’re doing, deservedly so. So for me, it was about just doing that bit of that sort of New York dialect that a certain intellectual generation had, and just projecting that confidence/cockiness that’s definitely a quality you see in the original.

AX: Does DOCUMENTARY NOW! fit with your own sense of humor?

URBANIAK: Oh, one hundred percent. I think Mulaney wrote this episode, and he has a real fondness for the past, specifically earlier show business, previous generations, and I love old movies and old plays. I think there’s just a mutual love of stuff from prior eras. THRILLING was also part of that, too. So, yeah. When I showed up on the set, I said to John, “This script is really your wheelhouse.” And he said, “I think this is all our wheelhouses.” [laughs] I think actors also tend to love showbiz stories, because everyone’s playing Sondheim and Hal Prince, but we’re also sort of playing ourselves. It’s sort of a comedic self-portrait any time an actor plays an actor in something, or a person of the theatre.

AX: Do you do any singing in the episode?

URBANIAK: I don’t sing in the episode, no.

URBANIAK: I can carry a tune in a character actor sort of way, but I’m not a Broadway belter.

AX: Were you aware of IFC as a network prior to working with DOCUMENTARY NOW!?

URBANIAK: I think I was aware of them, but I don’t remember what I was watching. But yeah. It just seems like interesting times, where you have these networks that can deliver more sort of niche programming. Because it’s a sort of niche idea, which is a good thing. The source material itself has a sort of limited audience.

AX: Does the episode’s portrait of the ‘70s fit with your recollections, if any, of the ‘70s?

URBANIAK: Well, I grew up in New Jersey, I was born in ’63, and I have vivid memories of going to New York with my family, now and then, to see shows or the circus during that era, early ‘70s. A lot of the costumes and hairstyles throw me back, photographs of my parents looking like that, with plaid pants and middle-aged men with slightly too-long hair in the early ‘70s.

AX: Did you have any say into Howard Pine’s look?

URBANIAK: Somewhat. It was a happy circumstance that I was between jobs when the offer came in, and I hadn’t shaved for a couple of weeks. I don’t normally have a beard; I didn’t have so much a beard as I just hadn’t shaved. And then I thought, “Oh, my goodness, I’m playing Hal Prince, who has a very manicured beard.” So I showed up with my facial hair, and they trimmed it to make it neater [laughs].

AX: As Howard Pine is a director, are you giving direction as your character to other people within the show?

URBANIAK: Yes, I am. There’s a scene where Mulaney and I gang up on the character of the record producer, sort of giving him notes. A lot of the scenes are about very opinionated people, arguing with each other.

AX: Did you have any flashbacks of very opinionated people giving you notes?

URBANIAK: Oh, well, yes. Yes. I think any time you play someone who’s kind of cocky or being difficult, you flash on when you were on the receiving end of that, definitely.

AX: Are you still doing anything with the THRILLING ADVENTURE HOUR people?

URBANIAK: Not really. I mean, the THRILLING ADVENTURE kind of ended officially, though they still do special events now and then. And a group of the actors from THRILLING ADVENTURE are starting to do a monthly improv show in L.A. at a space called Dynasty Typewriter, and I’m going to be a guest in that show in a couple months. There’s an improv format where a guest comes out and tells personal stories, and then the improvisers improvise, influenced by the stories. So I’m going to be a guest storyteller. And it’s a bunch of people from THRILLING – Hal Lublin and Mark Gagliardi and Paul F. [Tompkins], Annie [Savage].

URBANIAK: A bunch of things in the can. I’m in the next Richard Linklater movie, a film called WHERE’D YOU GO, BERNADETTE, based on the novel. That’s coming out in the summer. There are various other TV projects I’ve done that will be coming out. There’s an Apple series called FOR ALL MANKIND, which is a sort of alternative history of the space race, another period show. And then the other thing that I’m excited about is, I have a podcast called GETTING ON WITH JAMES URBANIAK, which is, ala THRILLING, radio plays, scripted little audio dramas, and I did a season of that previously, and I’m going to do a second season of that.

AX: Is that streaming?

URBANIAK: Yeah, the original episodes, you can find them online. I have a writing partner named Bree Williams, and we’re writing new episodes. That’s just a very fun format. There’s a little revival of that happening now, sort of old-fashioned radio drama.

AX: And what would you most like people to know about the “Cast Album: Co-op” episode of DOCUMENTARY NOW!?

URBANIAK: I think I would say it stands alone, if you don’t know the source material, as a very funny show. And then if you can find the original documentary on YouTube, it adds an extra layer of pleasure to the experience.

This interview was conducted during IFC’s portion of the Winter 2019 Television Critics Association (TCA) press tour.