Home » Supernatural The devil in the Details review 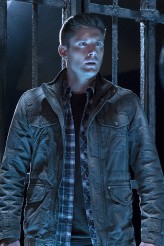 TV Review: SUPERNATURAL – Season 11 – “The Devil in the Details”

Sam gets a clue and Lucifer summons disco music – in other words, swell 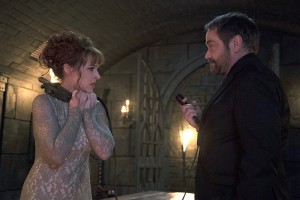 Historically, Lucifer has a reputation as a tempter, which he upholds mightily in the SUPERNATURAL Season 11 episode “The Devil in the Details.” The Devil, in this instance, as played by Mark Pellegrino, would actually like to be in Sam Winchester (Jared Padalecki) in order to use him as a vessel. Hey, it almost took last time, right?

Lucifer uses his wiles to try to persuade Sam, trapped with him in the cage, that letting the Devil walk the Earth again is the right thing to do, in the service of the greater good. After all, Lucifer was on the team that took down the Darkness, aka Amara (Emily Swallow), in the days before humankind.

For once, despite all the pretzel logic and flashbacks and insults thrown at him, Sam says no. This is not because of emotion, self-sacrifice, guilt, a desire to preserve Dean (Jensen Ackles), but out of logic. Simply put, what’s the point in letting Lucifer out of Hell to stop the Darkness if Lucifer just wants to stage his own apocalypse?

While many viewers will have reached this conclusion before Sam does, it’s still a joy to have him for once get to put his finger on the problem.

Meanwhile, Castiel (Misha Collins) and Dean try to find out whether Amara survived quasi-nuclear angel ambush in the mid-season finale. Of course she did, and she carves “I am coming” into Castiel’s chest just in case Dean et al had any doubts on the subject.

King of Hell Crowley (Mark A. Sheppard) is extremely vexed to find out that his mother Rowena (Ruth Connell) has been helping Lucifer for months now. After Crowley lets Dean into Hell, there’s a little mother/son mischief between Rowena and Crowley (she magically eavesdrops on him, he drugs her tea). The upshot is that Dean manages to get a witch collar on Rowena, compelling her to do whatever she’s told. Crowley and Dean tell her to do a spell to get Sam out of the cage and keep Lucifer locked away.

After Sam refuses to give Lucifer a ride out, Lucifer attempts to possess Sam by force. Dean and Castiel get snapped into the cage as well, with Lucifer first putting on some disco music – because, really, that’s the soundtrack you need when fighting in a Hell cage – and then doing battle with all three, threatening Dean to try to get Sam to comply and then asking Castiel if he has any last words. Then there’s a flash of light and everybody (except Lucifer) is out of the cage.

After Sam and Dean leave, Castiel comes into Crowley’s throne room – only it’s not Castiel. While Sam had enough sense to refuse Lucifer, Castiel’s fear of the Darkness was great enough to let Lucifer use him as a vessel. After determining that no one but loyal Rowena can do the spell to open/close the Hell cage, Lucifer-in-Castiel snaps her neck, then tells Crowley they have to talk.

It’s something of a hoot seeing Collins do his take on Pellegrino’s Lucifer. “Devil” also has a lot of great asides, including the appearance of a Sam Funko doll and Lucifer’s line that maybe he’ll go to L.A. and fight crime (why, yes, they do know what’s happening on other networks). Dean also has to sing his way into Hell. It’s a very entertaining episode.

As an added bonus, at long last we get an explanation (okay, it’s from Lucifer, may not be true) as to what happened to Sam and Dean’s half-brother Adam, who allowed himself to be possessed by the Archangel Michael. After being stuck in the cage with Lucifer for long enough, Michael apparently went insane and is somewhere in isolation Hell.

Still, the most satisfying moment is Sam telling Lucifer “No.” Sam phrases it as refusing to be Lucifer’s bitch, but what’s really heartening is hearing a Winchester for once not taking the bait on a guilt trip.