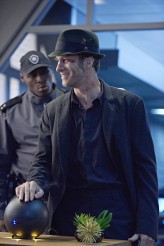 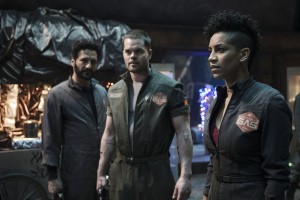 In Syfy’s THE EXPANSE, in its first season Tuesdays at 10 PM, humanity has spread across the solar system without getting any more humane. A distress call from a missing young woman entangles the crew of the ice-hauling spacecraft Canterbury in both a murder mystery and political intrigue that could lead to interplanetary war.

Show runner Naren Shankar, one of THE EXPANSE’s executive producers, has lots of experience in the science-fiction genre, with writing/producing credits that include STAR TREK: THE NEXT GENERATION, THE OUTER LIMITS, FARSCAPE and GRIMM. He also spent nearly ten years as a writer/executive producer on CSI.

Shankar talks with Assignment X about THE EXPANSE, which has been picked up for a second season.

AX: How are you dividing up the executive-producing and show-running responsibilities here?

NAREN SHANKAR: Mark Fergus and Hawk Ostby, they wrote the pilot, and they’re from the world of features, they wrote CHILDREN OF MEN and IRON MAN. They had not done television before. So this is their first foray into television. Obviously, I’ve done a lot of television, but we’re the team. We were all up in Toronto for the entirety of the [Season 1] production, so it’s us. Alcon, the studio, had made a lot of movies; they had not made a television show. So I was brought in as the show runner, which is the television head that helps you make a television show. It’s a fairly specialized kind of a job, I guess [laughs].

AX: Part of the pitch on THE EXPANSE is that it’s a murder mystery. Is your CSI expertise coming into play here?

SHANKAR: [laughs] God, I hope not. It’s hard for me to say how they were looking at it, but the first ten years of my career, I did only science fiction. I was on STAR TREK, OUTER LIMITS, FARSCAPE – that’s really where I started in the business and what I love to do. I ended up doing cop shows for a decade, and actually, after I left CSI, the first thing I said was, “I want to get back into genre.” And so I was actually looking around to figure out a project that would work for me, and met Mark and Hawk and Sharon Hall, the head of Alcon TV at that time, and we hit it off, and here we are.

It’s not a procedural in that [CSI] sense. There’s a mystery at the heart of it, but honestly, I’m of the mind that all good dramas are a mystery of some sort. It’s a mystery about a crime, it’s a mystery about your heart, it’s a mystery about emotion – that is one thread in a propulsive force that pulls the show along. And that’s really Detective Miller, Thomas Jane’s character, the guy who is tasked with finding a missing girl on Ceres, and this girl is the thread that connects all of the different storylines in the show. It is the girl whose call for help that Holden, Steven Strait’s character, decides to answer out in space that sets the dominoes going, and it puts all these people on this path and connects all of them together.

AX: THE EXPANSE is based on an ongoing series of novels by Ty Franck and Daniel Abraham, writing together under the pen name of James S.A. Corey. How faithful is the series to the source material?

SHANKAR: Adaptation is incredibly fun and incredibly tricky, because the task is always, I feel, to really preserve the spirit of the work. Initially, when I heard that Ty Frank and Daniel Abraham were going to be in the room, it was like, “Are you serious?” [laughs] I have to say, I had no idea what to expect. But the guys are so open to really understanding that this is a different form. There are things that you can do in novels that you cannot do on the screen, and I think that the trick is to distill the wonderful characters and material that they have built into this incredibly original story and we’ve actually even pulled from the novellas that they’ve written around the books, and just create guys on a journey. Ultimately, you are going to recognize all of these people in this story, and you’re going to recognize the things that happen in it.

Things are going to change, a lot like [with] GAME OF THRONES. Ty Franck was George R.R. Martin’s assistant, so he came out of that writing culture in Albuquerque, and so he’s familiar with this. He understands the demands of the medium. And having him there ultimately to really sign off and say, “Guys, we’re behind this change, we support it,” has been awesome. He’s a tremendous resource.

AX: Would you describe THE EXPANSE as a socio-political thriller in space, or is there more sci-fi to it than that?

SHANKAR: I think that’s actually a very apt description. It is exactly that. There is a science-fiction element inherent in the show, because we’re talking about humanity that’s actually spread out through the solar system. We’re actually dealing with things that most shows don’t, which are gravity, weightlessness, the fact that our ships have to be under thrust, otherwise, you’re floating in terms of weightlessness inside the ship. We don’t have gravity plating, we don’t have all of the things that most science-fiction shows just use, because it’s way easier [for other shows to produce their stories as though the ships have internal gravity]. What we wanted to do was capture, give a sense of how tough it would actually be to live and work in space. And it’s one of the things that distinguishes the books, it’s a grittier and – I’ll use the term loosely – more realistic portrayal of what it would be like to have – it’s up on the screen, [people] floating in the middle of the ship.

AX: In the story, the characters haven’t solved the gravity problem. In production, how did you solve the making-the-actors-float problem? 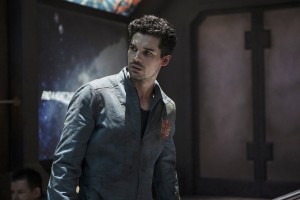 SHANKAR: Well, that was a big old bag of tricks. We have people on wires, we have people on teeter-totters that are blue-screened, then we move them away. We shoot things off-speed, the actors move their bodies, there’s choreography so that they can move their bodies in a way that makes them appear to be weightless. So it’s sort of all of these things at all times. Different things lend themselves better to other situations, but we try real hard to capture that sense of what it’s like to be in space as much as possible.

AX: In terms of the overall production design, were you looking primarily to make things looked real, or were you mainly trying to make sure that you didn’t look too much like other science-fiction shows?

SHANKAR: Well, you always want to take a unique approach to something. You tell me. You look at the show and tell me if you’ve seen anything that looks like this before. I haven’t. I’ve done a lot of science fiction, but I haven’t seen something that looks like this. I think that if we have to describe it in a few words, the word we would go for is “gritty.” This is a future that looks like it’s got gears, there are mechanisms, space is big with heavy, clunky things. There’s a tactile sensibility to it, and it’s messy. People and human beings tend to be messy, and it’s not sleek and beautiful and streamlined and polished. It’s a world that has been lived in, and it’s got a lot of grunge and a lot of junk in it.

AX: There are various groups in the book – people from Earth, people from Mars and people who live in the asteroid belt. People from this last group are called “Belters.” Was there ever a thought that calling them Belters might make viewers think of, say, Ethel Merman?

SHANKAR: There’s a planet of Ethel Mermans? My goodness. Now there’s an idea. I think we’re going to get there maybe in Season 5. No, that’s what they call them in the book, and the first time I heard it was when we were sitting around, talking about the show.

AX: Is it one season per book? Because each one is a big book.

SHANKAR: That is a big book. So let me turn the question back to you – do you think you could do a ten-episode season of one book?

AX: It seems unlikely, unless everything was either very pared-down, very sped-up, or both.

SHANKAR: You’re pointing out something that’s important, which is, part of the fun of doing a show of this nature is a slower burn. Because the joy of television is in allowing character moments to really breathe, in allowing the audience to spend time really getting to know people. Book One especially is told at a breakneck pace. There is so much action and so much event in it, it’s almost like you could make the argument that there’s no way we could produce this on television at that same pace. So the fact that we have opened up the story, we’ve opened up an additional storyline, it’s changed the pace of it, but it’s actually really good. You get to know and love and spend time with the characters in the show.

AX: Can THE EXPANSE continue as a TV series if you run out of book?

SHANKAR: Well, that’s not going to be easy to do, because [five novels and four novellas have so far] been published. They’re planning on writing nine [novels total].

AX: So you’re in GAME OF THRONES territory, where if you do manage to get through this one big novel, here’s the next big novel in the series?

SHANKAR: Absolutely. They have a big story to tell, it takes a lot of time to actually go through it. We are not rushing through these books by any stretch of the imagination. The nice thing about television is, you get to spend time and live with people and learn these characters. The books move at a crazy fast pace in terms of plot and event. We actually had to slow it down a little bit, just so you could spend time with the characters and get to know the people on the show.

SHANKAR: You know, it’s the kind of science fiction that you haven’t seen in a very, very long time. It’s gritty, it’s very human, it’s about the little guys against really, really big events. Science fiction is so wonderful in terms of allegory. There are times in history where humanity has reached a crisis point, like when atomic power or nuclear fission was discovered. You had that moment where it was either limitless power, or the destruction of the Earth. And you feel like humanity is at another one of those crises. Is technology going to be our salvation, or is it going to be our doom? And those are themes that are deeply embedded at the heart of the show.

That’s what we’re doing here is, we’re taking another moment in human history. The theme is really encapsulated in the line that Jonathan Banks [as an executive officer] has. He goes, “We come all this way, so far out into the darkness, why couldn’t we have brought more light?” That’s really at the heart of the show.