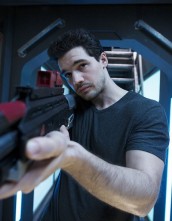 The actor talks his character's motivations in Season 1 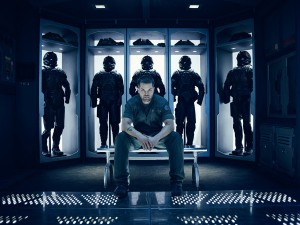 In space, your crewmates actually can hear you say something to the effect of, “I think the ship may be falling apart.” This is one of the many hazards on Syfy’s new series THE EXPANSE, now in its first season Tuesdays at 10 PM and renewed for a second.

Based on a series of best-selling novels by James S.A. Corey, THE EXPANSE has multiple interwoven plot threads. One of these concerns the Canterbury, a spaceship that is not exactly in ship-shape as it hauls ice across the solar system two hundred years from now. This is physically perilous work in any event, made more dangerous by the fact that war may be brewing between various planetary factions.

Steven Strait plays Canterbury crew member Jim Holden. The New York native has worked in genre projects before – one of his early roles was Warren Peace in the superhero movie SKY HIGH. Other credits include 10,000 B.C., STOP-LOSS, CITY ISLAND and a series regular role on MAGIC CITY.

AX: What is Holden’s job on the ship?

STEVEN STRAIT: Initially, Holden’s job on the ship is, he’s the second officer. Holden, over the last five, six years, has turned down every promotion that they tried to give him. He doesn’t really want any more responsibility than he has. He’s very happy being where he is. So at that point, you’ve got the captain and him just running an ice hauler, which is like an oil tanker of the next couple hundred years.

AX: Is he very bonded to the rest of his crew? Is that why he keeps refusing a promotion?

STRAIT: No, it isn’t. It’s actually quite narcissistic. He’s spent his whole life just running from authority. He doesn’t want the responsibility over other people. He has never wanted to answer to anybody and he’s happy with his life being simple, out in the middle of nowhere with these other outcasts. Frankly, everybody on the Canterbury when you meet them is running from something. There’s a reason why they’re out there. It’s in the middle of nowhere, life is really hard. You have to really want to be there and disappear. And Holden wants to remain semi-anonymous.

AX: THE EXPANSE depicts this as a fairly dangerous profession …

STRAIT: The ships are hundreds of years old. It’s like the equivalent of THE MOST DANGEROUS CATCH and those ice haulers are like the fishing boats or the oil rig workers. We’ve been patching [the ship] together. We do what’s called a flip-and-burn, which means we’re traveling at incredible speed in one direction, we turn the ship around midflight, and then hit the engines and start going exactly the opposite direction, so there’s a huge lurch, and so it was showing there’s loose crap in the ship that comes flying down, and it’s actually talked about in the episode, where one of the people says, “Oh, we’re going to lose our cargo,” and Holden says, “Well, you better make sure we don’t, strap it down,” because everyone knows that gravity shift is going to throw everything around, strap it in, like a moving van.

AX: Your characters also have to take a chemical cocktail called “the juice” to survive deep space and the movement of the ship …

STRAIT: The juice. Well, I think one of the amazing things about the books and the way that we try to portray these books is, we want it to be as realistic as possible, and there is no hyper-jump or light speed. It still takes time to get from place to place. And to handle the G-force, you’re essentially pumped up with steroids, or what the equivalent would be in a couple hundred years, just to be able to take it. It’s hard on the body.

STRAIT: Everybody brought everything they had. I think we have a lot of passion on this show. And you hear this a lot, how everybody on set loves each other on set and it was incredibly rare, but in this case, it truly is a unique circumstance, where you have everybody coming to the table giving everything they have, and the energy becomes infectious. The passion kind of starts to rotate around everybody, and I think ultimately we all just wanted to make the best show that we possibly could. The potential was always there and I think we wanted that to be fully realized. We have these amazing books, these amazing screenwriters who adapted the books, incredible executives, directors who have done incredible work in the past, and all the pieces were there for us to make something that we were really proud of, and we really set about doing that to the best of our ability.