Home » BONES review The Cowboy in the Contest 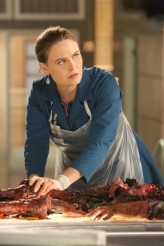 So many subplots that the main mystery gets lost 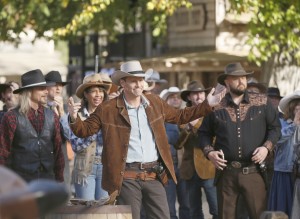 Normally, it’s a good thing when the arced subplots in BONES come to the fore, but in the Season 11 episode “The Cowboy in the Contest,” there are so many that the A storyline gets a bit trampled in the stampede.

When the bullet-riddled corpse of a man dressed as a cowboy is found, 26 days after his death, the Jeffersonian team is intrigued. It turns out that the deceased, an accountant named Stanley Belridge, was an enthusiastic participant in a monthly Wild West shooting competition held on private land done up as a nineteenth-century frontier town. Competitors are encouraged to dress up and maintain character during the games.

Booth (David Boreanaz) decides to investigate undercover as Big River Buck. He and Brennan (Emily Deschanel) have been arguing over his desire to buy a motorcycle, which Brennan thinks is extremely unsafe. Talking this over with Angela (Michaela Conlin), Brennan concludes that Booth wants the danger of the motorcycle to compensate for a lack of excitement in their marriage, so she decides to surprise him by arriving at the games as Wild Card Wanda.

Booth is surprised, all right – and even more surprised when Brennan gets competitive about the shooting contest. Meanwhile, Booth’s FBI partner Aubrey (John Boyd) thinks the games sound like so much fun that he dons a poncho and turns up as well.

Back at the lab, Cam (Tamara Taylor) is afraid to be emotionally intimate with new boyfriend Sebastian (Gil Darnell) until lab tech Daisy (Carla Gallo), who not so long ago lost her fiancé/baby daddy Lance Sweet, gives her a pep talk. Angela talks to Hodgins (TJ Thyne) about her desire to have a second child, but Hodgins finally says that he feels so happy with their family as it is – the two of them, plus their little boy – that he’s not ready to add to it yet.

By the time they leave the frontier town, Booth has reassured Brennan that he still finds their marriage – and her – exciting, and Brennan buys Booth a bicycle with a helmet. He does not find this an acceptable substitute for a motorcycle.

This is all decent, more or less, with the Angela/Hodgins scene a standout. However, the lab work takes such a back seat to everything else that by the time the clues point to the culprit – a woman who killed Stanley because he was blackmailing her over her affair with a married man – it seems almost beside the point.

BONES has always been about its characters and their interactions, rather than the case of the week. This is as it should be. Even so, the procedural aspect of the story shouldn’t get this obscured. A light episode is fine, but “The Cowboy in the Contest” seems on the verge of floating away altogether.