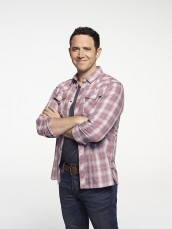 The actor also talks SHADES OF BLUE and FROZEN 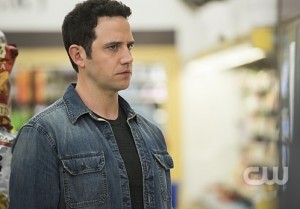 Santino Fontana as Greg in CRAZY EX-GIRLFRIEND | © 2016 The CW

The two shows could hardly be more different. CRAZY EX-GIRLFRIEND stars Rachel Bloom, who co-created the show with Aline Brosh McKenna, as Rebecca Bunch, who gives up a promising Manhattan law career to move to West Covina, California, in pursuit of her oblivious crush Josh (Vincent Rodriguez III). Rebecca’s daydreams tend to be all-singing, all-dancing extravaganzas.

SHADES OF BLUE stars Jennifer Lopez, who is also one of the series’ executive producers, as Harlee Santos, an NYPD officer in a corrupt precinct who is blackmailed by an FBI task force into spying on her friends and colleagues.

Fontana’s voice will be familiar to practically everyone around the world, as he’s the voice of the scheming Prince Hans in Disney’s FROZEN. Other credits include the feature thriller JACK RYAN: SHADOW RECRUIT, playing Mozart on Amazon Studios’ MOZART IN THE JUNGLE and a lot of Broadway and other stage work.

So how is Fontana juggling his BLUE and CRAZY schedules?

“I’m super-lucky, and I’m incredibly grateful, but this [BLUE] shot in the summer,” the California native explains during a Q&A session for SHADES OF BLUE hosted by NBC during the most recent Television Critics Association press tour.  I got married, and then I came here [to Los Angeles] to do CRAZY EX-GIRLFRIEND, so there was a little overlap, and the two shows were very kind to let me go back and forth. That was it. So it’s been great to see something that we did a while ago and get to see [BLUE cast mates and creators on the panel with him] again, and also how different the shows are. It’s really fun to be a part of both, and yeah, it’s exciting. That’s why I think we all do what we do, which is to be able to keep trying different things. So I’m lucky to be able to have done that.”

At another Television Critics Association event, this one sponsored by the CW, Fontana engages in some CRAZY talk, as well as inevitably answering some FROZEN questions.

SANTINO FONTANA: No. The majority of work I’ve done as an actor has been straight plays in New York. So singing came later, and not even in New York, regionally as well. So singing is an additional thing I do. And [FROZEN] was the only thing I’ve ever done as an animated voice artist.

AX: Did anybody say while you were working on FROZEN, “You know, this might explode and take over your life in this completely strange way”?

FONTANA: No. I think we had no idea how successful it was going to be, or how many people were going to love it. We had no idea. And it was great. It’s great to be a part of. I have no idea – I think they’re still figuring out what the story’s going to be for the second one. And I don’t know if I’ll be in that or not.

AX: Do kids recognize you by voice?

AX: Or do parents who are with their children tell the kids who you are?

FONTANA: Sometimes. Occasionally. But kids don’t tend to really necessarily get it. So they look at me funny and they kind of hide [laughs].

AX: Did you have a musical audition for CRAZY EX-GIRLFRIEND?

FONTANA: Yeah, yeah. We all did. We all did the scenes, and then we all sang individual songs. I sang a song called, “I’m Your Guy.” It’s a John Pizzarelli song, it’s a jazz standard that I ended up playing and singing. It’s something I used before.

AX: Could you be called the tenor of sanity on CRAZY EX-GIRLFRIEND?

FONTANA: I think a little bit. I don’t know too much yet, because it’s early days, but I’m the one who sees, “What the heck’s going on, this makes no sense.”

AX: How would you describe your character Greg?

AX:  How does he feel about living in West Covina?

FONTANA: He hates being there. He works at this very odd bar, which is also connected with a baseball field for children, like Little League teams, and then the fathers and the parents go into the bar where he’s at and they drink while the kids are playing baseball. It’s very odd. It’s an odd juxtaposition with the kids and the drinking.

AX: How would you describe West Covina to those who’ve never been there?

FONTANA: It’s a suburban town, a lot of malls and Orange Juliuses and stuff like that. It’s kind of nondescript in a way.

AX: Do you know Greg’s trajectory? Does he find out that Rebecca’s really got a crush on Scott?

FONTANA: Yeah. He knows pretty early on that she’s got a thing for Josh.

AX: And how fond is Greg of Rebecca? Could he become a crazy would-be boyfriend?

FONTANA: I don’t know. I think it’s too early days to know, from my point of view, at least. This is also very new for me and for all of us. So I’m not sure what they have planned. But I trust Aline and Rachel. They’re two smart ladies.

AX: Do you know how many musical numbers you’ll be doing?

FONTANA: Several, yeah. I don’t know how many, or exactly when or what, but I know I’m involved.

AX: To ask a few more FROZEN questions, do we hear Prince Hans in the FROZEN FEVER short that accompanied the new theatrical version of CINDERELLA?

FONTANA: He grunts. That was me. They didn’t need to bring me back, because they had grunts from the original. So they were able to grab a grunt from previously.

AX: Have you seen the incarnation of Prince Hans on ONCE UPON A TIME?

FONTANA: I have not.

AX: Are you going to be back in FROZEN 2?

FONTANA: I hope so. I don’t know. I think they contacted everybody to let everybody know, “Here’s what we’re thinking, but we don’t know …” They’re still figuring out the story, and because I was the villain, it’s tricky. They don’t know. So we’ll see. I hope so.

AX: Have you done concert touring for FROZEN?

FONTANA: For FROZEN? No. I’ve sung with quite a few orchestras and stuff, I’ve done that before, but I haven’t done anything with FROZEN. None of us have, actually.

AX: Do you have any of the merchandise from the film?

FONTANA: Disney sent me a doll, and there’s a wooden model that they based it off of, which is great, and then when it went platinum, they sent me that for the album.

AX: Have you had a chance to meet people from other CW series?

FONTANA: Actually, I met Jared Padalecki [who plays Sam Winchester on The CW’s SUPERNATURAL] when we were both seventeen. We were both in a scholarship competition in Florida called Young Arts – it’s called Young Arts now, but it was the National Foundation for the Advancement of the Young Arts at the time, and we were friends there that week, and then we lost touch, and since then, he’s been on SUPERNATURAL for a very long time. So I look forward to seeing him whenever I do.

AX: How would you feel about being on a show that ran for eleven years like SUPERNATURAL has, playing the same character?

FONTANA: I’ve never thought about it, to be honest. I’ve been happy doing what I’ve been doing, so I don’t know. I should ask Jared that. I don’t know. I literally I feel like as an actor, I tend to live off the next breath of air I take [laughs], so I have no idea down the road. I think only right in front of me.

AX: What would you most like people to know about CRAZY EX-GIRLFRIEND?

FONTANA: I think that it’s really, really fun and really entertaining, and there’s all this original music in it, something that we haven’t really seen on TV.