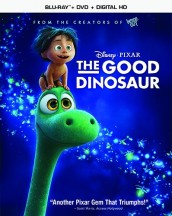 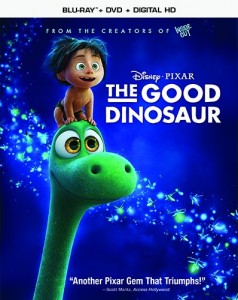 THE GOOD DINOSAUR – Pixar has been rolling out the good stuff for over a decade and they continue that hot streak with THE GOOD DINOSAUR, a new take on animated films that changes history presenting a world where life wasn’t wiped out by an asteroid but a world where dinosaurs lived on and evolved into more intelligent beasts and humans remain as animals. When Arlo the dinosaur goes on a journey, he hooks up with a human friend and the two travel the harsh landscape meeting a slew of unlikely allies in the process. The two get into a lot of trouble but they are quickly able to avoid any real danger while learning about the world in which they live. This is a fun family movie and proves that you can come up with new animated ideas and make them work if the story is sweet, fun and down-right hilarious at times. Included on the Blu-ray is a cool short film that played in theaters about a character named SanJay that loves comics and despite his father’s wishes draws what he wants. There are also a good number of featurettes looking at the making of the movie and how they came up with some of the ideas for the film.  There are also deleted scenes and games that kids will enjoy. Very well worth it if you have young children. 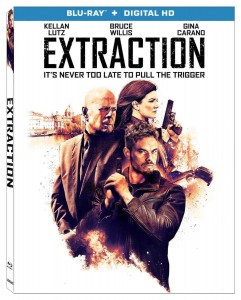 EXTRACTION – The straight to video market has gotten some bigger names of late. Apparently with roles harder to come by, those A-list actors that used to get the choicest roles are now having to take whatever they get. Bruce Willis has become the king of the straight-to-video market starring in any action flick that comes along because 1) it’s Bruce freaking Willis 2) he still can act 3) he still has enough left in the tank to do some action. This time he’s joined by fellow new video star Kellan Lutz (of the TWILIGHT fame that no longer holds any mettle) as he attempts to track down his father (Willis) that has been kidnapped by a terrorist group. Lutz’ character has repeatedly tried to join the CIA but was denied but now he is forced to use his training to stop the assassins and terrorists in order to rescue his dad (who naturally gets in on the action). The film also stars former MMA star (and current DEADPOOL villain) Gina Carano, who continues to prove she can match with other action stars. The movie is standard action fare but Willis always does a serviceable job, Carano is enjoyable and Lutz is, well, Lutz so not the worst you could do out there. 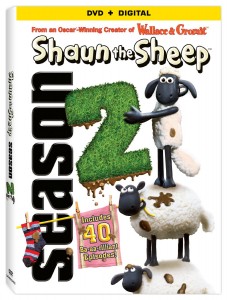 SHAUN THE SHEEP: SEASON 2 – Claymation has come a long way since its early days and the makers of WALLACE & GROMIT have mastered it. SHAUN THE SHEEP follows a mischievous sheep and his friends that cause chaos at Mossy Bottom Farm. The series was turned into a movie of the same name and did alright for the most part in theaters but the series is where it shines with quick stories that are quick-witted and fun without having to conform to an allotted time or overly complicated story. In Season 2, we get more of this with Shaun, Bitzer, Shirley, Timmy and the naughty pigs from next door creating fun and zany adventures. Included on the DVD are games featuring the gang, sing-a-long songs and making of featurettes. Also out this week is SHAUN THE SHEEP: SHEEP ON THE LOOSE, a new movie about the gang sneaking into an amusement park for a day of fun and trying to cover their tracks before their farmer finds out. DVD is probably where this type of movie should have appeared in the first place, finding a more welcome home. 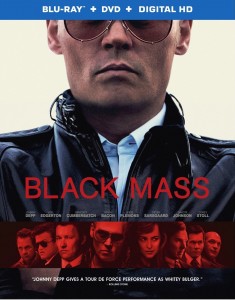 BLACK MASS – If the depiction of Whitey Bulger (Johnny Depp) is anything close to how he was in reality, he could be one of the coldest bastards to ever walk the Earth. If he isn’t wooing you with sweet words and then stabbing you in the back or having one of his henchmen shoot you in the head, he’s threatening/not threatening you at every turn with his cold eyes and sadistic ways. Depp is at his best when he’s not doing some crazy shtick wearing some ridiculous outfit (MORTDECAI/THE LONE RANGER/TRANSCENDENCE) but playing it straight and showing off just how good of an actor he can be. BLACK MASS he does this as Bulger, which documents the crime boss’ rise to infamy through the members of his closest circle turning state’s evidence against him.

BLACK MASS does a great job of showing how while working as a so-called informant for the FBI, Bulger went about killing numerous competition and rising his own power with the help of an corrupt FBI agent. With a laundry list of Hollywood notables in the cast (Benedict Cumberbatch, Joel Edgerton, Kevin Bacon, Dakota Johnson, Adam Scott, Jesse Plemons), a strong storyline, good period piece sets and outfits and excellent acting, this is a great watch, especially for those that love a good mob/crime drama. Some good stuff on the Blu-ray disc including a look at the actual manhunt for Bulger and featurettes on the making of the flick. 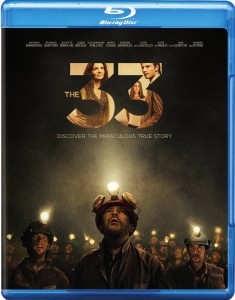 THE 33 – In 2010, the world was captured by the plight of 33 miners that were trapped 200 stories underground in Chile after the collapse of a gold and copper mine. Day after day, the world watched not knowing if those trapped were alive or dead and as rescue teams gathered their families and friends watched on with hope. THE 33 tells the story of the mean trapped and the hard times they had to go through in order to survive with terrible heat, tension among the men, and lack of provisions and at every turn knowing their breath could be their last. The story is a gripping one because it is something that no one has gone through in modern times. The film reveals a never-before-seen look at what happened deep in the cave with an all-star cast including Antonio Banderas, Juliette Binoche, James Brolin, Gabriel Byrne and Lou Diamond Philips.