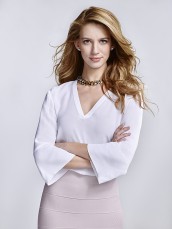 The actress talks about her character's maternal possibilities 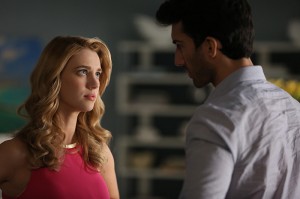 Gina Rodriguez plays the title character in The CW’s one-hour comedy JANE THE VIRGIN, now in its second season Mondays at 8 PM. Although engaged to police officer Michael (Brett Dier), Jane was accidentally inseminated (during what was supposed to be a routine pap smear) with sperm from her employer, wealthy Rafael Solano (Justin Baldoni).

Jane is now the loving mother of little Mateo, but meanwhile, Rafael’s scheming but occasionally conscience-stricken ex-wife Petra, played by Yael Grobglas, has found a way to get pregnant on her own.

Grobglas starred in the recent horror film JERUZALEM and had an arc on the CW’s REIGN. At a party thrown in West Hollywood by CBS and the CW for the press, she talks about what she’s looking forward to in portraying Petra.

AX: Petra has done a lot of questionable things through the run of the show, including stealing Rafael’s sperm …

AX: Do we know what Petra’s up to next?

GROBGLAS: Well, I think the only person who knows anything is [JANE THE VIRGIN creator] Jennie Urman Snyder. I know nothing. I try to get information out of her, every single time, every single table read, and she gives me nothing. I can say what I’m hoping for. I would love to see what it’s like for Petra to deal with being a mother, what happens. Because she could either be terrible at it and have no maternal instinct, or her maternal instincts can kick in and she could become this lioness of a mother, which I think would be extremely interesting for me.

AX: Petra sometimes tells the truth about how she feels and she’s sometimes full of something other than truth. First of all, do you always know when you’re reading the scripts, do you ask Jennie Urman, is this real, is Petra faking this, or do you play everything as though it’s real, and then find out later whether she meant it or not?

GROBGLAS: Well, by now, I know Petra, and I can kind of tell when she’s being genuine and when not, but I think it’s an interesting choice to play it – if she’s lying, you don’t want to see the lie, you want to see her being a good liar. I think that’s more interesting. And keeping the audience not knowing is an important part of Petra, because she is a good liar. But you do get to her honest, vulnerable parts. And I think that’s what’s so great about the writing, Jennie’s writing and our amazing team of writers, is that you never really know what she’s up to. And it’s a gift for an actor to play a role like this.

AX: When did you know JANE THE VIRGIN was a hit?

GROBGLAS: Well, I never thought about it in terms of “hit” or “not hit.” All I knew was that we were incredibly grateful to be working on something where we all like each other very, very much. We’re group-texting, we’re making each other laugh, we’re having a blast doing what we do, and we really appreciate the material that we’re working on, and that balance is rare and amazing. And I think the first time that it really hit me that we’re doing well, besides getting wonderful feedback on Twitter, was actually not long ago, when we were at Paley Fest. Getting that immediate live feedback from the fans, being on stage and seeing the fans face to face and getting that love was an incredible experience.

AX: Do you have any other projects?

GROBGLAS: I’ve visited my parents and my friends [in Israel], because I’m Israeli, I’m from there.

GROBGLAS: I love Alona Tal. She’s a good friend of mine. She’s wonderful. There is a little bit of a group going, and it’s all wonderful people.

AX: And what would you most like people to know right now about JANE THE VIRGIN?

GROBGLAS: That we’re having a great time making it and working on Season 2, and even though I don’t know any facts, I know from Jennie Urman that it’s going to be unbelievable.