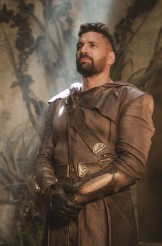 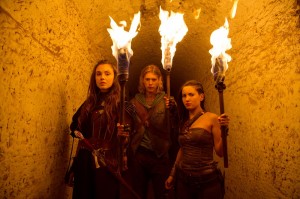 Poppy Drayton as Amberle, Austin Butler as Wil and Ivana Baquero as Eretria in THE SHANNARA CHRONICLES | © 2016 MTV

Adapted from Terry Brooks’ best-selling fantasy novel series, MTV’s THE SHANNARA CHRONICLES, Tuesdays at 10 PM, is set thousands of years in the future, when humans are subservient to elves and all are doomed unless it’s possible to stem the flow of demons from another realm into this one.

Jonathan Liebesman set the tone for SHANNARA by directing the first two episodes. Liebesman is known for helming feature films, including the horror movies DARKNESS FALLS, THE TEXAS CHAINSAW MASSACRE: THE BEGINNING and THE KILLING ROOM, the alien invasion action thriller BATTLE LOS ANGELES, the fantasy WRATH OF THE TITANS and the 2014 TEENAGE MUTANT NINJA TURTLES.

Here Liebesman talks with Assignment X about creating a realistic fantasy world that is a version of Earth’s far future.

AX: Were you familiar at all with Terry Brooks SHANNARA books before this project?

JONATHAN LIEBESMAN: Yeah. In South Africa [Liebesman is originally from Johannesburg], they were a big deal amongst teenagers. I remember, on all my friends’ shelves, were SHANNARA books, LORD OF THE RINGS books and the Isaac Asimov FOUNDATION series. Those were the three things I’d see at every friend’s house.

AX: Did you depict the world in the series as you envisioned it when you read the books?

LIEBESMAN: Yeah. I think what I enjoyed about this process was, there was a team involved in the world-building, where it was [executive producers] myself, Terry, Jon Favreau, Al [Gough] and Miles [Millar], and I enjoyed collaborating and finding a vision together. It’s a little different than movies, because your show runners run the show, whereas in movies, a director is more [in charge].

AX: Whereas in television, the ultimate control is in the hands of the writers/executive producers …

LIEBESMAN: But I sort of enjoyed that, because I respect the other guys’ work. I think IRON MAN [directed by Favreau] is my favorite Marvel movie. So you’re dealing with Jon Favreau and Al and Miles, who’ve built incredible worlds. And so you’re standing on their shoulders and just learning, and I love learning.

AX: You make SHANNARA in New Zealand, where Sam Raimi and Robert Tapert produce quite a lot of television for American networks. Had you crossed paths with any of their crew people when they were doing SPARTACUS?

LIEBESMAN: No. I didn’t work with them when they were shooting SPARTACUS, but we got a lot of those guys to come onto our show because they’ve done such great work on the other shows. So using their experience from SPARTACUS and the Sam Raimi shows, things like XENA, and the Peter Jackson shows, that’s sort of how we were head-hunting for our crews.

AX: You have giant landscape shots and a huge magical tree and other major visual effects. Do you just say, “This is how I envision it,” or do the producers tell you, “This is what the effects team can do, what do you like?” Do they give you options, or do you give them an overall vision, and then they give you options?

LIEBESMAN: You generally give them a vision, and then they show you something back. What I like to do is, I actually went up in a helicopter over the South Island of New Zealand with Peter Jackson’s location scout, and found a mountain I really liked for Arborlon. I have a RED camera, and so I shot an orbiting shot around the mountain, put it in my computer, and then put a little CG tree and some CG proxy castles and stuff to show the guys roughly the size of things that I wanted, the specific designs and concept art [that visual effects companies] Pixomondo and WETA drew up and then they would model the tree and the castle to that stuff, but I found a mountain I liked and placed things in my 3D program.

AX: In the advertising artwork, there’s an image of Poppy Drayton’s Amberle’s character stretching over what looks like a very old giant TV antenna. Do you have a lot of references to current technology that is ancient by the time of the story, or just occasionally, or is that just for the advertising?

LIEBESMAN: The world is our world in the future. The hard thing is, because you’re thousands of years in the future, a lot of stuff has decayed. And so I didn’t want to put too much stuff all over the place, because I thought I was going to get called out, like, “That antenna would never be there in thousands of years’ time.” It’s sometimes a lose/lose situation. If you don’t put enough, people are like, “Oh, it’s just for money shots”; if you put too much, people tell you, “That would never be there in a thousand years, the only thing left would be glass. Every sort of metallic substance would have eroded at this point.” So it was just finding the balance.

AX: And how do you balance the different acting styles of your cast? You have some very classically trained people, like John Rhys-Davies, some very contemporary drama people and then some younger people.

LIEBESMAN: It’s a chemistry thing. You put the guys all in a room and you see who fits. The same like when we were casting NINJA TURTLES, you’re putting a whole bunch of different Ninja Turtles together and you see who has chemistry together. It’s more of a “Is the sum greater than the parts” rather than, “These parts are awesome, but the sum becomes less.”

AX: Has working on NINJA TURTLES given you experience with demanding fans?

LIEBESMAN: Yeah. And I’m a demanding fan. When I watch anything, I’m demanding. Filmmakers always come at things from the point of view of a fan. The reason I got into movies was to try and make people experience the awesome emotions I experience when I see something I love. I wanted to see if I could create that for someone, so I come at it from a fan [perspective], so yes, absolutely.

AX: How much influence do you have over the SHANNARA episodes that you did not direct?

LIEBESMAN: I directed the first two, and then Brad Turner was the directing producer on the rest. We sort of set the world up together, the style, all that, and then people take over.

AX: What was the most challenging aspect of this for you?

AX: So you were actively trying to make SHANNARA a little more upbeat?

LIEBESMAN: Yeah, absolutely. Because I think that’s where there’s a niche in fantasy on TV. I mean, GAME OF THRONES does an incredible job of the other side of that coin, and there’s no sense in competing with that, because they have a budget that’s far greater, and so within the constraints we were offered, what could we give to an audience that they aren’t seeing on television, and the medium of TV is great, because as Favreau said, it gives you the time to explore a story without trying to fit it into two hours.

AX: And what made you happiest in working on SHANNARA?

LIEBESMAN: I’ve done a lot of male-centric, boy-centric stories, and I love that it’s a show where the two leads are strong female characters, because I think that’s totally missing. Everyone always says it, and you can see – this year, I would say JESSICA JONES or MAD MAX. There’s a need for strong female characters. I was so happy to be working on something that passes [the Bechdel] test [which requires two female characters to talk with one another about something other than a male] with flying colors, because it’s completely necessary, and when I see a show that has stronger female characters, I’m much more into the show. My favorite action movies are Jim Cameron action movies, where [Linda Hamilton as] Sarah Connor is the lead, or Sigourney Weaver [as Ripley in ALIENS]. I was excited to be working on something like that.

AX: And what else are you working on right now?

LIEBESMAN: A small movie called MAN AT ARMS with a writer called Jeremy Light, which is a very cool story in the vein of YOJIMBO, something like ROBIN AND MARIAN, where an old Lancelot has to save a town, very small, character-driven story, like an old Western.

LIEBESMAN: Again, I think it’s a really delightful fantasy show, and I’m proud that it has strong female characters.

This interview was conducted during MTV’s portion of the most recent Television Critics Association press tour in Pasadena, California.