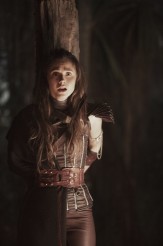 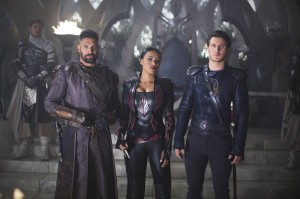 MTV’s THE SHANNARA CHRONICLES, Tuesdays at 10 PM, has been adapted from Terry Brooks’ best-selling SHANNARA fantasy novels. We’re in a world several thousand years in the future, when technology has been supplanted by magic, and humans are now a minority in a society ruled by elves. The Ellcrys Tree, which has long staved off demons, is dying, and evil is slipping into the realm. Princess Amberle (Poppy Drayton) joins forces with half-human Wil Ohmsford (Austin Butler) in an attempt to prevent the forces of darkness from ascending.

THE SHANNARA CHRONICLES was brought to television by the executive producing/writing team of Alfred Gough and Miles Millar, who are also responsible for AMC’s hit series INTO THE BADLANDS, another show set in the future, albeit a nearer one (only a few hundred years from now), when society has become feudal and swords have replaced guns. Gough and Millar previously brought the story of Superman’s early years to TV in the decade-long run of SMALLVILLE.

Asked about similarities between the futures shown in THE SHANNARA CHRONICLES and INTO THE BADLANDS, both men laugh in surprise.

AX: Are you just in a storytelling mood of, “We like the swords and no guns and the greenery and the action …”?

MILES MILLAR: We never thought about there being no guns in SHANNARA, because guns did not feature in this world at all. So it’s a really fascinating idea. But I think for us, it was like, we really wanted to make sure that both shows were very distinctively different, that the world-building was very different, and if you look at the shows, I think you’ll see that in terms of the sets and the wardrobe and the props. INTO THE BADLANDS is a much more heavily distressed future. Both very colorful and very stylized in terms of their approach to the look of the show, but –

ALFRED GOUGH: Yeah, I think you’re right. They both happen to be set way in the future, one further than the other.

AX: Did either of both of you read the SHANNARA books when you were young, or did this come to you as a project later?

GOUGH: It came to us as a project. We were familiar with Terry from his other [novel] series, the LANDOVER series, MAGIC KINGDOM FOR SALE, which has been kicking around studios for a long time. But they brought us SHANNARA and we read the book ELFSTONES OF SHANNARA [which is the basis of the television series], and thought it was great, and we thought this would be a fantastic season of television, and also, you could just see the world he’s built is so big, you could just go on for seasons.

AX: Because each SHANNARA book takes place in a different generation, can you take the end of one book and keep going from there for more seasons, because in order to hit the next book, you’d need a whole new cast?

MILLAR: That’s obviously the challenge of this book series, unlike GAME OF THRONES [which consists of interwoven but continuous storylines], the generational element of the series. So for us, it poses a little bit of a challenge, but obviously, we have loved working with Terry, and he’s our partner in this, so I think together, we can really come up with something that’s great and that will please the fans, but also help us keep our characters going forward.

AX: Do you feel like your experiences on SMALLVILLE are helping you deal with fans and fans’ reaction to canon when it comes to beloved material?

MILLAR: Absolutely. I mean, SMALLVILLE – we were in the crucible there with fandom with the crown jewel of D.C. But here, for us, it was the social media element, dealing with that. We were at the very nascent stages of the Internet with SMALLVILLE, so this has been a new experience for us, and we love the direct interaction with people and getting feedback immediately. It’s been fascinating for us to see that.

AX: Have you had to learn anything new technologically in order to make SHANNARA? Certainly, it looks like it’s very involved from a special effects standpoint.

GOUGH: SMALLVILLE was state of the art. When we premiered, nobody had done those sorts of effects on TV, and it’s something we’ve always kept our finger on. And I think here, what you’re seeing in a lot of television is, visual effects become a crack pipe. So what we didn’t want to do was virtual sets and things that looked fake. So in a way, we sort of pulled back from that and we built real sets. We wanted the world to be very tactile. The creatures are from WETA Workshop. The Dagda Mor isn’t a CG character, he’s a guy [Jed Brophy] with incredible makeup that was designed by WETA Workshop. And when you see the gnomes, those are also creatures. And then in that, you just add these amazing visual effects. I think for us, what’s interesting is, you can just do a lot more, and you can do it faster.

AX: John Rhys-Davies plays the elf king Eventine Ellesedil in SHANNARA. He was Gimli in the LORD OF THE RINGS films. Do you feel he raises the show’s fantasy pedigree in a way as far as the casting goes?

MILLAR: John lives in New Zealand [where SHANNARA is produced], and we asked him to come in and meet with us, and he was a little bit skeptical. But after the meeting, we walked around the sets and he really got a sense of what we were doing, what we were trying to do, which is to create something that is very distinctive and isn’t on television at the moment. So I think he really jumped aboard and to have that pedigree, the legacy of RAIDERS OF THE LOST ARK and the movies that he’s done over his career, and LORD OF THE RINGS, obviously, for us, it was an incredible stamp of approval, and we love the idea of that legacy and dynasty being on our show.

AX: As far as characters or plotlines, is there a particular one that you’re having more fun with than the others?

GOUGH: You know what? They’re all pretty good. What we tried to do was, you want to make all the stories interesting, because you certainly don’t want to write boring stories [laughs]. So I think for us, they’ve all been really interesting and they’ve all been compelling and the changes that we’ve made to them, Terry signed off on, and in some cases is like, “Oh, I wish I’d thought of that when I was writing the books.”

MILLAR: In the first season of the show, you’re learning about the show, so you want to expand it, and you sometimes make a mistake and you correct it, but you want to learn what your show can do. And that’s what’s great about a first season of a show. You really get the experience of actually seeing what it can do.

AX: And how is your time management going, because INTO THE BADLANDS was a huge hit, and maintained being a huge hit going into Season 2, and that shoots on a different continent, in a different time zone, so how are you organizing this?

GOUGH: Well, we actually shot this [SHANNARA] first, and then we went to New Orleans and shot INTO THE BADLANDS, so we were in New Zealand [January of] last year, prepping. And there are two of us, so on the producing side, you can divide and conquer.

MILLAR: Make no mistake, we have never worked harder in our lives. It’s been a really challenging year. We’re passionate about what we do and like to oversee every detail, and it was grueling but rewarding.

MILLAR: For me, I watch the show, I think it’s wildly entertaining, I think it has an incredibly likable cast, a deeply empathetic cast, you really root for these people, and yeah, it’s not the dark legacy of GAME OF THRONES – it’s something that is about heroes and about hope and about optimism. That said, it’s gnarly and it’s violent and it’s bloody and it’s cool and I think it’s very visually distinctive, something that people would enjoy watching.

GOUGH: That’s it. I think he said it.

This interview was conducted during MTV’s portion of the most recent Television Critics Association press tour in Pasadena.