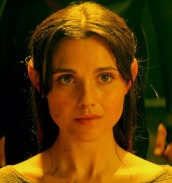 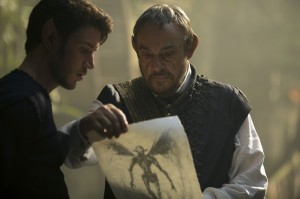 It’s taken Terry Brooks’ best-selling and long-lived SHANNARA fantasy book series about forty years to make its way to the screen, but MTV has finally brought it to television in THE SHANNARA CHRONICLES, Tuesday nights at 10 PM. In Season 1, we’re a few thousand years in the future, when technology is a distant memory, magic is in use and elves dominate the world (humans are rarer and less valued). Demons have long ago been banished to a realm called the Forbidding, but as the guardian tree Ellcrys loses its leaves, the monsters break free one by one. Elf maiden Amberle (Poppy Drayton) goes on a quest to save the land.

Not everyone believes in Amberle and her quest – or even in the Forbidding – but her father, King Eventine Elessedil, has great faith in the old lore. His Majesty is played by John Rhys-Davies, who has acted in films, TV and theatre all over the world. However, the Welsh-born actor is probably best known for his roles as Sallah in the INDIANA JONES movies and as the dwarf Gimli in the LORD OF THE RINGS trilogy.

Speaking to a group of reporters during MTV’s portion of the Television Critics Association winter press tour, Rhys-Davies appears genuinely enthusiastic about his work on SHANNARA. “Actors are supposed to be effusive about the projects that they’ve been on,” he says, “and I just don’t want you to take this as being in any way false. I’ve been around for quite a long time. I’ve been in some fairly big projects and some pretty disastrous projects. This is the only production that I’ve ever done where it seems to me every judgment call has been right. There’s no show that you do without going, ‘Hmm, I’d do that a different way,’ ‘Oh, that’s a bit poor, that’s a bit weak.’ But everything on this show I could not second-guess and would never dream of doing so.

“The MTV choice itself to make it is bold, and yet it is brilliantly calculated, because Terry comes with a real audience [having sold more than fifty million books]. That’s a considerable audience to start with. But then to actually try and push it out into a new demographic to start to move the company in a new direction, bold stuff, risky stuff, but a quantifiable risk, the choice of [executive producer] Jon [Favreau], who I’ve only just met actually, and [adapters for television/executive producers] Al [Gough] and Miles [Millar] to produce this show is brilliant. And the choice to let them produce it and not to counter-produce it with fifteen execs around the television set every day, saying, ‘Oh, no. I think it should be like this.’ Jonathan [Liebesman]’s direction is brilliant. Successive directions, marvelous. The cast, they are not just eye candy – and they are surely that, but they are really gifted and delightful actors. They are nice people. And you just go down the line. The scripts – every time, you go, ‘That’s very good,’ or ‘Damn it, that’s very good.’ It is an extraordinary thing to be able to unreservedly say, ‘This is a great show.’”

Rhys-Davies is equally happy about SHANNARA’s sets, special effects and other production values. “The technology has caught up, and one of the extraordinary things about this show is, it is going to set new standards of expectation in the fantasy genre and, indeed, I think, in the actual physical replication of whatever world you could imagine. The standard is really high. Part of the credit to this goes to New Zealand. It’s a great country to film in, because the vegetation is slightly alien, slightly not quite what we [are used to], but also because of the tradition that Peter Jackson has made with the Weta Workshop and the level of enthusiasm and creativity in the crew. There’s no blasé-ness. There’s no sense of, ‘We’ve been doing this for years, and we know how to do it,’ and those sorts of things. They are eager, and they are engaged. And now the technology is there, and it’s going every day. And we are going to see better and more imaginative things because, I think, actually, the human creative factor will always be one step ahead of the technology.”

When the panel ends, Rhys-Davies takes the time to discuss his work further.

AX: Do you particularly enjoy the fantasy-adventure genre, or is this just where you keep getting work?

JOHN RHYS-DAVIES: The last two things that I’ve done – actually, two of the best performances I think that I’ve given – in one, I’m a Cockney salesman in New York in 1994 and in the other I’m Saint Peter. So I don’t always play in this genre. But I love science, to begin with, and I love history, and science-fiction, science-fantasy just show an alternative vision of where we may go. And for that reason, I love that.

AX: Do you like playing the more character-type roles, or the more regal characters?

RHYS-DAVIES: [laughs] You do what you’re damn well told, you know that.

AX: But what gives you the most enjoyment?

RHYS-DAVIES: To be honest with you – look, last year, I did a narration for a heavy metal band. It’s called Metal A Cappella, in Germany. I also did some narration for the Nova Scotia Symphony Orchestra. The first does not make me a heavy metal man; the second certainly does not make me a classical musician. Look, I just like working. I like getting out of bed in the morning at some ungodly hour and thinking, “Ooh, I get to go to work today, and I don’t really mind.” Acting is a muscle.

AX: Are you still learning when you work? Have you learned anything new doing SHANNARA?

RHYS-DAVIES: Yes. When you work with young actors who are alive, their freshness, their enthusiasm just infuses you, and you and I are so lucky in that we live in that creative world. And just to interact with other creative people just keeps you alive in a way that you never expected.

RHYS-DAVIES: I think this is a great show, I think it’s going to be huge.