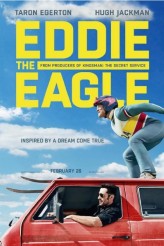 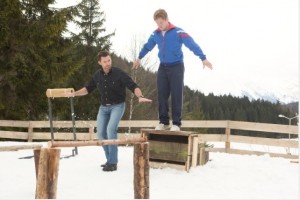 EDDIE THE EAGLE is a movie that shouldn’t work. This isn’t because the subject matter isn’t engaging – a late-coming rookie to a death-defying sport who makes the Olympics is perfectly cinematic in narrative and visual terms. However, the fictional treatment of how real-life Michael “Eddie the Eagle” Edwards achieved fame is so broad that there a character literally does a spit take, a major figure is wholly invented to provide a very standard emotional arc, and the movie is so intent on making sure Americans will watch it that it has a working-class Englishwoman, when told how many meters a ski jump is, ask her husband what that measures to in feet.  (This would be akin to having a provincial U.S. woman suddenly ask what a foot measurement comes out to in metrics.)

In short, EDDIE THE EAGLE is clumsy. Yet somehow director Dexter Fletcher, writers Sean Macaulay and Simon Kelton, working from Kelton’s story, manage to draw us into this unlikely but true (in broad strokes) tale, so that by the end, we’re invested in what happens and we honestly want to see Eddie succeed.

It’s the Eighties, and we’re in England. Eddie, played as a young man by Taron Egerton, has spent his entire life wanting to be in the Olympics. This is despite the fact that he was hospitalized with two bad knees in his childhood, has poor eyesight, moves from sport to sport (failing at one, he tries another) and is from a neighborhood in Cheltenham where nobody becomes an Olympic athlete. His plasterer father (Keith Allen) is exasperated by Eddie’s efforts, though Eddie’s mum (Jo Hartley) is much more supportive.

Then Eddie settles on skiing as his sport. He briefly even makes the team, but is cut. Then Eddie discovers that England hasn’t had a ski-jumping team since the 1920s. Eddie thinks he can be England’s ski-jumping team, if he just learns the sport. He’s twenty-two years old; most ski jumpers begin training when they are age six or younger.

Undeterred, Eddie winds up in Germany, where he encounters (the fictional) Bronson Peary (Hugh Jackman), an American snow-plow driver working the runs who, it turns out, used to be an Olympic ski jumper himself. Eddie would like Peary to coach him. Peary wants nothing to do with it.

It’s not difficult to guess how that works out, but Egerton is so absolutely committed to Eddie’s absolute commitment (even when it seems like perhaps he should be committed, in the institutional sense) that it starts to resonate. Director Fletcher sees the beauty and the poetry in the jumps when they’re performed successfully, and the sheer terror and seeming impossibility of the higher-meter runs. It’s impossible not to be impressed with Eddie’s ferocious determination and how far it gets him, no matter how formulaic some of the storytelling gets.

There’s also an issue of how Eddie is depicted in the early going. He is clearly eccentric, but the film’s broadness does him a disservice initially, going so far as to make him seem mentally challenged, then walking this back once Eddie finds his calling. This doesn’t seem intentional, but rather a matter of poor calibration.

Jackman is charming, even though Peary’s trajectory is easy to guess, and Hartley is adorable as Eddie’s loving mother. Jim Broadbent brings added fun late in the day as a bemused English Olympic announcer.

There are better sports movies out there, but despite its many flaws, EDDIE THE EAGLE has enough moments when it soars to provide what adds up to a pretty good time, which also makes us want to know more about the real person.