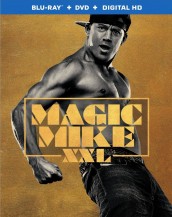 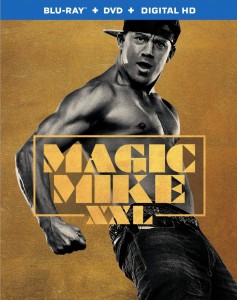 MAGIC MIKE XXL – So what happens when something surprises at the box office? You make a sequel of course. But that doesn’t mean it should actually happen. Take MAGIC MIKE XXL for instance. The first film wasn’t a powerful drama that challenged your thoughts and ideas mind you but it at least had some heart and it was amusing (in between all the beefcake). Unfortunately, this appears to be a cash grab with the actors walking through what should have been a pretty easy sequel to make. For those wanting more of the beefcake. Well it happens but not as frequent and when it comes, it comes in spades (maybe more than some wanted from the responses on social media and critics). The humor is not nearly as spot-on, the dances not nearly as good, the plotlines is a mish-mash of one long improv show mixed with some cartwheels and handstands. I might go as far as to say the story is scatterbrained without knowing where it wants to go at times and pulling out a shocking moment at the end. So if you like the sexy and fun side of male strippers that you got in the first one, you may be disappointed in what you see in the second part. 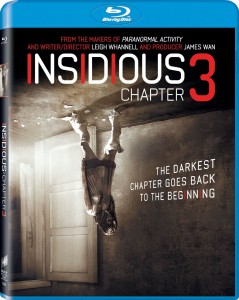 INSIDIOUS: CHAPTER 3 – Well, there have already been two movies of this franchise, why not make a prequel for the third. Of course the main problem with sequels is it takes out some of the excitement or fear that may come from some of the characters that are involved. In this case, namely Elise Rainier (Lin Shaye) that obviously makes it alive to INSIDIOUS 1 and 2. Again some pretty gnarly paranormal events are impacting a family and they ask Elise to help them contact the other side in order to help flush a demon from causing them harm. Things don’t go necessarily as planned and it isn’t as easy as just that. Why it borders on the predictable, there are some decent scares here and maybe most importantly CHAPTER 3 functions as a decent standalone movie without any ties to the previous films outside of Elise. Not sure if it is better than what came before it but to say that it is at least on par with those films is not a bad thing considering the first two chapters were good entertainment. Worth checking out if you liked the first two or this type of genre of horror. 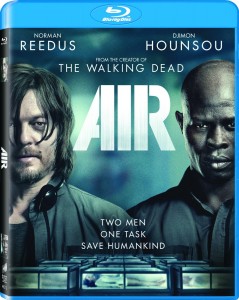 AIR – A different take on the end of humanity … and aren’t there so many of them out there these days? Here, breathable air is no longer available. The last of humanity is gathered together in bunkers held in stasis until a better day happens. Two men are tasked with making sure those that still live can get the air they need in order to continue on in this fashion – how horrible it may be. Unfortunately, being locked in a bunker for years and only having one person to talk with, added with the stress of being responsible for humanity is a bit hard on the sanity. So that becomes the main point of the flick and it becomes a bit tedious very quick as there isn’t a heck of a lot else going on in AIR. Norman Reedus (of THE WALKING DEAD) stars and as good as he is in the show, he is downright annoying in this one. Djimon Hounsou, who has been in a number of great films, co-stars and he also has trouble with the role as even he plays it like he wants to be doing something else. This is a rental or Netflix option at best with much better science fiction offerings out there. 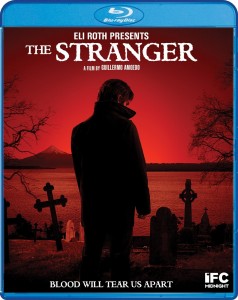 THE STRANGER – This is an unusual take on the vampire genre. A vampire couple has been trying to lay low for years but when the wife of the couple takes a life, the husband decides that enough is enough and decides to end the “infection” by killing them with fire. She escapes but not before she tells him she’s pregnant as impossible as it sounds. Fast forward a few years and he is still hunting her down. It takes him to a small town where corruption is king. He finds out that his wife gave birth to a boy and he becomes his protector which includes having to kill a handful of teens and maim the son of the local sheriff, who happens to be the most corrupt on them all. Seeing that the vampire has regenerative qualities in his blood, he feeds his blood to his nearly dead son. Bad idea as the teen turns into a blood thirsty vampire killing everyone and anyone in sight. This leads to an inevitable confrontation between the vampires in hopes of ending the infection once and for all. THE STRANGER is one of two films out this week that is from Scream Factory that is not a cult classic but a new movie showing they are not just digging up old movies to convert to high definition but are expanding into new horror flicks for our enjoyment as well. 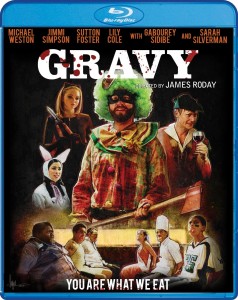 GRAVY – The other movie from Scream Factory and another new movie. GRAVY is a horror comedy about three sadistic friends that each and every Halloween pick a restaurant to attack and they eat the employees. Yes, eat the employees. This time they choose the wrong restaurant as those attacked fight back struggling against the employees that obviously don’t want to be eaten. There are some real slapstick moments here where they befriend some of the people inside the restaurant and fight them in crazy ways including using a ceiling fan, a fish tank, a corkscrew and basil (the herb, yes). It is not your ordinary cannibal flick. So don’t expect THE GREEN INFERNO but if you want some good laughs along with some decent amounts of gore, it is worth checking out for sure. 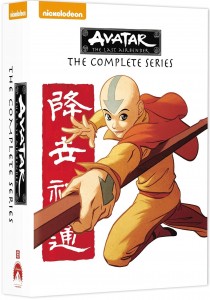 AVATAR: THE LAST AIRBENDER – THE COMPLETE SERIES – So there are a number of cool things about the release of the animated Nickelodeon series AVATAR: THE LAST AIRBENDER. First is that you get all 61 episodes from the series that aired from 2005-2008 but you also get all of the special features from the season-long releases including making ofs and behind-the-scenes featurettes, a host of auto commentaries with the cast and other extras such as animatics, graphic novels and more. All of this for a cost of $30. That’s a good deal for the amount of stuff here. Plus, there is no M. Night Shyamalan to screw up what you thought the series was about, which is always a good thing. So if you were waiting for the complete series to come out now is your chance to get it. 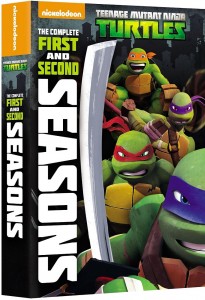 TEENAGE MUTANT NINJA TURTLES: THE COMPLETE FIRST AND SECOND SEASONS – The fan-favorite animated series TEENAGE MUTANT NINJA TURTLES from 2012 comes to DVD for the first time with both the first two seasons of the show in one set. Featuring 52 episodes from the first and second seasons on eight discs with more than 24 hours of programming, the DVD set also includes a good deal of special features such as behind-the-scenes featurettes, animated comic books, animatics, scene-by-scene breakdowns of action sequences, fake news reports and much more. For those that have long been waiting for this to finally come out, here it is and at not a bad price of $29.99.