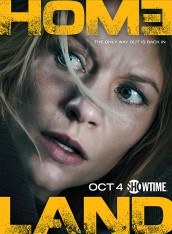 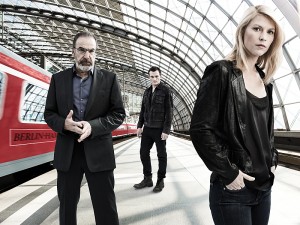 Nicholas Brody may have died at the end of Season 3 of HOMELAND, but Damian Lewis, the actor who played him, is alive and well and, just at this moment, hanging out with Alex Gansa. Gansa and Howard Gordon adapted HOMELAND for Showtime, based on Gideon Raff’s Israeli series HATUFIM.

Gansa is still show runner on HOMELAND, which just began its fifth season on SHOWTIME and airing Sundays at 9 PM. In the new season, Claire Danes’ character Carrie Mathison finds herself dealing with intrigue in Berlin, Germany.

Lewis, back at Showtime on the premium cable network’s upcoming series BILLIONS, expresses the opinion that actors can’t know ahead of time what a series will be like, so they rely on the track records of the writers, creators and producers.

ASSIGNMENT X: Does that give you a sense of obligation to your cast?

ALEX GANSA: Oh, that’s what motivates us. We want to deliver the best possible material to the most unbelievable actors on the planet. And we’re lucky to work with them.

AX: You’re clearly in the midst of a reunion, so just one more question – what would you most like people to know about Season 5 of HOMELAND?

GANSA: I think the thing I would like you to know about it is, think about where Berlin exists geographically. It’s the center of so much stuff that is happening in the world right now. There’s Putin on one border, there’s this Charlie Hebdo attack on the other border, there is the Islamic State happening down in Syria. It is the epicenter of the Snowdenista sort of dissident surveillance-state culture. And it’s a fascinating spy town.

This interview was conducted at the CBS/Showtime/CW party at the Pacific Design Center for the Television Critics Association summer press tour.