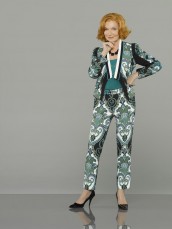 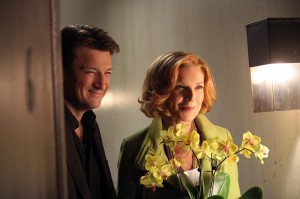 On CASTLE, now in its sixth season, Mondays at 10 PM on ABC, we have long known that our eponymous hero, played by Nathan Fillion, was raised alone by his mother, actress Martha Rodgers, portrayed by Susan Sullivan.

At least, Sullivan says that’s something she’d like to see when we get to speak with her at a party thrown by ABC for the Television Critics Association.

ASSIGNMENT X: Going forward, do you know what you’d like to see happen with the rest of this season of CASTLE?

SUSAN SULLIVAN: I’m hoping they bring James Brolin back, for God’s sake. That would be fun.

AX: Were you pleased to find out that’s who Castle’s was played by?

SULLIVAN: Yeah. He’s an attractive guy. And he’s tall. You can look up. We women need to look up at a certain point. It’s a better angle.

AX: Had you ever imagined anybody in the role of Castle’s dad before it was cast?

SULLIVAN: You know, I gave it some thought. You tend to think of your friends, and I thought of David Selby from FALCON CREST, or Bob Foxworth, or that kind of thing, just because you have a history with an actor and it sort of informs the part and the relationship. But it’s always fun to meet somebody new.

AX: So do you have a favorite episode or scene in what we’ve seen until now? Do you like it when Martha gets to do her theatrical stuff and get into costume?

SULLIVAN: Yeah, I like that. I’d like Martha to write a book. I’d like Martha to sort of impact aging women with a sense of possibility and how it feels to feel marginalized and trying to stay in the game. That’s always what interested me about the character. So when those kinds of scenes come up, I like it. I’d like her to dance wildly around the house, because that’s how you get out of depression. I liked the Chet thing [when Martha almost got married]; I liked the relationship. Having a relationship was kind of nice.

AX: In the last couple of seasons, Martha’s had some episodes where she’s really been afraid that either Castle or Alexis is going to die – Alexis got kidnapped, Castle almost succumbed to a virus. Since Martha is not inherently a worrier, is it difficult doing those scenes without throwing her completely out of character whack?

SULLIVAN: You know, the character is used as she is needed in terms of the scripts. So sometimes she’s really wise and direct and smart; sometimes she’s completely stupid and off the wall. So she’s a little bit of everything. But the truth is that we’re filled with contradictions as human beings. So I think for the most part, I can make those scenes work, because I believe that we are very multi-dimensional.

AX: Do you feel motherly towards Nathan Fillion, since he plays your son?

SULLIVAN: Yes, I do. I do. In fact, during the break, while he was inBora Bora, or some exotic place, I had dinner with his mother Cookie, and I know him a little better now.

AX: Have you enjoyed seeing Molly Quinn grow up on the show as Martha’s granddaughter over the years you’ve been doing it?

SULLIVAN: I love Molly Quinn. We did a play together. We did KINDERTRANSPORT at L.A. TheatreWorks, and she really is a wonderful actress. She’s going to be better and better. She needs to be messier. She’s a little too perfect. But she’ll get there. She’s just delightful.

AX: The actual Kindertransport was to get Jewish children out of Germany before the outbreak of World War II. Can you describe the play KINDERTRANSPORT?

SULLIVAN: It’s a very kind of involved piece, because it goes back and forth in time, but it’s obviously about the kids who were sent from their parents in Germany, right before the break of the Second World War, to live in England, and about what happened to them, what happened to these kids who were suddenly left without parents and living with strangers and in a strange country. It’s a fascinating play. [Quinn] played my daughter. And I played the daughter of Jane Kaczmarek. So it was back and forth in time betweenGermany andEngland and the present and the past. We did it as a radio play. I was surprised. I didn’t know if it would work. It was kind of confusing to read, but to play it – the audiences were very enthused.

AX: What else do you have going on right now?

SULLIVAN: You have two CASTLE-heads here. Seamus [Dever, who plays CASTLE’s Detective Kevin Ryan] and I are doing charity lunches. We have two lined up. Fundraisers. We’re both in the same companies – the Antaeus Theatre Company and L.A. TheatreWorks.

AX: So people pay money to have lunch with the two of you to benefit the theatre groups?

SULLIVAN: Yes. It is amazing. I find it interesting to see who these people are.

SULLIVAN: It’s a delightful place to be, and it’s great to have a job at this point in life.