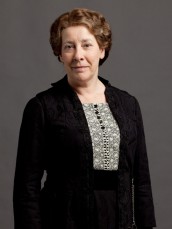 DOWNTON ABBEY, the phenomenally popular series about the wealthy British Grantham family and their servants before, during and after World War I, launches its fourth season on PBS Sunday, January 5 at 9 PM.

When PBS throws a DOWNTON ABBEY event for the Television Critics Association, actress Phyllis Logan is among the guests. Logan plays Mrs. Elsie Hughes, the chief housekeeper at Downton Abbey. Logan, who hails from Scotland, is a constantly working actress in the U.K., with credits including a series regular role on six seasons of LOVEJOY as the very “upstairs” character Lady Jane Felsham and her award-winning performance in the feature film ANOTHER TIME, ANOTHER PLACE.

As Season 4 of DOWNTON ABBEY begins, it’s now 1922. Mrs. Hughes is still mulling over a cancer scare and, with the rest of the household, mourning the Season 3-ending death of Matthew Grantham (Dan Stevens). On a far happier note, in real life,Logan sounds as though she still hasn’t gotten over the extent of the series’ worldwide success.

ASSIGNMENT X: When you started DOWNTON ABBEY, did you imagine it was going to turn into this sort of monument?

PHYLLIS LOGAN: Monument – that’s a good one, monument [laughs]. No. Nobody, nobody, nobody could ever guess it was going to be like this. Nobody. We were flabbergasted. We still are flabbergasted by its huge success and popularity, very much so, yes.

AX: You gave quite a speech at last year’s SAG Awards ceremony, when DOWNTON ABBEY’s cast won the award for Ensemble Drama …

LOGAN: Well, it was completely off the cuff, I tell you, because we though we didn’t have a snowball’s chance in hell of getting an award, really, because we were up against all of these other fantastic American shows, which had been well-received and well-loved for many years, and there are so many of us as well, although there were only five of us able to go to the thing. But yeah, we were so gobsmacked – we were absolutely amazed and astounded and thrilled. I think you could tell that.

AX: Have you done a lot of research into the period of the series, World War I, before and after?

LOGAN: As far as personal research goes, we have a wonderful historical advisor called Alastair, who knows everything about everything and has been a constant on the show, which is great, because he keeps us right about the most seemingly insignificant points about how you place a table knife next to the butter knife, things like that. It’s got to be three-and-a-half inches or something. He knows everything about that sort of stuff. But he can also tell you how you would behave towards the people upstairs, because you wouldn’t be so deferential, because you live in the same house. You would be deferential, but you wouldn’t be doffing your cap and cowering every time they came around the corner. And I suppose for myself, there’s a lot that’s there in the script [for] the character. You think, well, you’ve got to build some sort of back story in your head.

When we had the war episodes – my grandfather had been killed in the First World War when my own dad, his son, was a baby. So by just knowing that and through family history and family folklore, [I knew] that practically whole villages were wiped out. We did very well at Downton to only have a couple [of casualties]. I thought that [the World War I storyline] was done very well, and it was quite pertinent and relevant to a lot of people, not excluding me and my family.

AX: Do you think Mrs. Hughes thinks of herself more as a servant to the people above her, or a general to the people who are under her?

AX: What’s been the biggest change for Mrs. Hughes from the start, in your opinion?

LOGAN: I think we should clarify this – she didn’t have cancer. I think the health scare that she has had has made her realize that actually life is short and we’re all just passing through and it’s going to be gone in a minute and I think she’s also appreciated more – I think up until she had that health scare, when Lady Cora [Elizabeth McGovern] intimated that she would look after her if she ever got ill or anything like that, I think that affected her and touched her rather a lot, and I think that’s maybe affected her relationships – well, her perception of them, anyway, not just as these people that she has to work for, not that she bows and scrapes to them, but I think it did alter her perception of them in a positive way, in a good way, and I think that’s really been a change.

AX: Someone has compared Mrs. Hughes and Jim Carter’s Carson to a Greek chorus. Is that something you’d thought about?

LOGAN: No, but what I do like – I was saying our little chats sometimes that we have, in either his pantry or Mrs. Hughes’ sitting room, and when we are recapping the day’s events, or the week’s events, and that does sort of put a final dot on – for my mind, it does – on what’s been happening, and it is, I suppose, like the chorus. I like that.

AX: Is there anything you’d like to say about DOWNTON ABBEY?

LOGAN: Oh. Something I’d like to say is, do we have fun on the show?

AX: Do you have fun on the show?

LOGAN: What do you think? [laughs] We have an absolute riot on the show. We love it – it’s a job from Heaven.