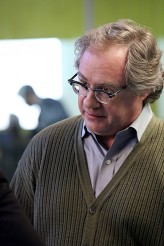 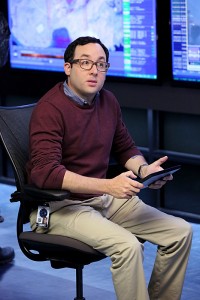 CBS’s new series INTELLIGENCE premieres Tuesday Jan. 7 at 9 PM before settling into its regular timeslot on Mondays at 10 PM. Josh Holloway (Sawyer from LOST) stars as U.S. government agent Gabriel Vaughn, who has a chip embedded in his brain that enables him to access computer information from everywhere and then see that information as images and action. Marg Helgenberger (CSI) is his boss and Meghan Ory (ONCE UPON A TIME) is his designated bodyguard.

John Billingsley, the acclaimed stage, TV and film actor who spent four years as the alien Dr. Phlox on STAR TREK: ENTERPRISE, plays Dr. Shenandoah Cassidy, who invented the chip and consequently has paternal feelings towards Gabriel. This is resented by Shenandoah’s actual son Nelson, played by New Jersey native P.J. Byrne (THE WOLF OF WALL STREET, HORRIBLE BOSSES, THE LEGEND OF KORRA, THE GAME), who is also a scientist working with Gabriel.

Billingsley and Byrne are hanging out together at a party thrown by CBS for the Television Critics Association. With them is Billingsley’s wife, actress Bonita Friedericy, (who played Gen. Beckman on CHUCK, which was a more comedic take on the premise of a computer-enhanced spy). Although the new series is a drama, everyone is in a playful mood discussing various aspects of INTELLIGENCE.

ASSIGNMENT X: Did either of you have to learn how to do anything, like run faster or appear to do brain surgery, for INTELLIGENCE?

JOHN BILLINGSLEY: I am not the smartest guy when it comes to tech. [Regarding the dialogue about technology], I only understood one word in four. There were a couple of sentences where it was like, “Bonnie, I don’t understand even the sentence.” We had to look it up.

BONITA FRIEDERICY: John is going through his script and says, “Oh, P.J. has to say this.”

BILLINGSLEY: Bear in mind, I did play an alien doctor for four years, so questions about the endocrine systems of various alien species – that won’t come up, probably. 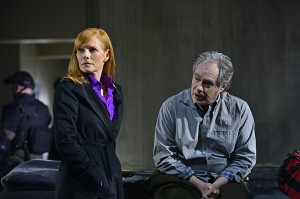 AX: Are you applying any Dr. Phloxisms to this doctor?

BILLINGSLEY: Oddly enough, this role is somewhat similar to Phlox, except I don’t have to have a funny voice or a rubber head. I do have to have gray hair – I’ll still be in the damn makeup chair for an hour and a half [he is joking].

BYRNE: You have a mad memory for some of our lines, though.

BILLINGSLEY: These lines are hard.

AX: So there’s sort of a paternal/fraternal triangle between the two of you and Josh Holloway’s character Gabriel?

BILLINGSLEY: I have a brainiac son and a son who’s really handsome.

BYRNE: Yes, and that’s me, I’m the handsome son.

BILLINGSLEY: It’s like MY TWO SONS. Which is what they were going to call the show originally, but then …

AX: How well-founded is Nelson’s concern that Shenandoah favors his other “son”?

BYRNE: He loves me more.

BYRNE: That is a great dad. I love you, Dad.

AX: How is having Marg Helgenberger play your boss?

BILLINGSLEY: She’s a lovely, charming woman and she’s terrific on the show.

BYRNE: When you meet her, you’re like, “You’re lovely, you’re beautiful, you’re charming, you’re awesome, you’re a great egg.” But she is madly intimidating when you have to bang heads with her, especially when she’s interrogating you. She brings it. She’s going to be a great power broker, leader, intimidator.

AX: Are you still involved with THE LEGEND OF KORRA?

BYRNE: I’m Bolin. I’m Korra’s best buddy. I wish I was her boyfriend, but Mako is.

AX: You also play Nicky Koskoff in THE WOLF OF WALL STREET. How was being directed by Martin Scorsese?

BYRNE: It’s like the pinnacle of pinnacles. It’s the top of the mountain. I don’t know if I’ll ever go back to that experience again. I think we all said that. Leo [DiCaprio] said that and Jonah [Hill] – especially [with] the topic of the movie, it was brokers in the late Eighties/early Nineties. It’s going to be tough to beat an experience like that.

AX: Are either of you involved in other projects we should know about?

BILLINGSLEY: P.J.’s having a baby [in real life].

BYRNE: Baby, THE WOLF OF WALL STREET and then THE LEGEND OF KORRA on Nickelodeon. Those are my things.

AX: What else should we know about INTELLIGENCE?

BYRNE: Very well, yeah. Not afraid to push the envelope at all, and I think what’s going to be great about the show is, we’re the final backstop for the world. So the worst problems, we’re the people that can hopefully stop it.

BYRNE: But you also learn how complex the world [of the story] is, and you don’t know where the problem is really coming from, what’s the source. And that’s what makes it exciting. So it’s a whodunit, it’s a math problem, it’s a ticking clock and it’s a sci-fi BOURNE IDENTITY.

BILLINGSLEY: The question that apparently everybody asks is, if you had the chip, what would you do with it? I haven’t formulated an answer. What can we say?

BYRNE: I would help every new parent care for their child so they could sleep a little longer. How’s that?