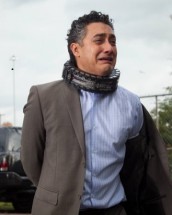 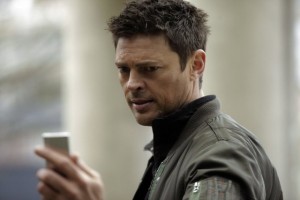 After the “Pilot” episode of ALMOST HUMAN, which was rich in mythology of the show and backstory about both of the main characters, the show has gone into the technology of the week routine with one bad guy after another possessing some sort of new type of technology in order to create havoc and chaos.

For this show, however, it hasn’t been that bad. In fact, the one-shot episodes have done a lot to garner the relationship between Kennex (Karl Urban) and Dorian (Michael Ealy) which is obviously needed in a new show as well as one where one cop has a partner that is an android. They have also done a pretty good job infusing some long-played-out themes throughout the one-shots including Dorian’s wish to have a place of his own to charge his batteries because, obviously, he is not like his unfeeling counterparts.

This much-needed relationship chemistry is definitely good because it is being done organically and not forced like some other shows that involve cops or lawyers or whatever. It doesn’t matter the topic, if it is forced, it doesn’t work. Here on ALMOST HUMAN it is working to an extent where we are starting to care about each of them in a good way. And we have yet to tip the scales into the mythology of the show, which should be coming I would imagine.

At least, at some point it needs to come because we can only have so many episodes with so many bad guys doing bad things that don’t mean anything to the overall show. On other shows it might work, but on this show, a science fiction action show, it is definitely needed.

“Simon Says” was really good because of two things. One, we got to see what happens to Dorian when he runs lows on power and the results were pretty funny as his emotions were all over the map leading to some great lines of dialogue and fun moments. Second, Karl Urban was just great in this episode. I’ve always been an Urban fan anyway but in this episode he was really good from the caring officer trying to reassure a civilian that she wasn’t going to blow up, to his calm demeanor as his own life was hanging in the balance, to his continued playful antics with Dorian. He really is coming into the Kennex character and hopefully this will continue.

“Simon Says” didn’t do anything for the show in terms of the mythology but it did a lot in terms of the relationship between the two main characters in building that bond that they are growing and showing that Urban does indeed have a soft spot for his partner, whether he wants to admit it or not. We’ll see how far this relationship goes but so far despite not getting to the meat of what ALMOST HUMAN will bring, it is so far a fun show with lots of good and maybe more importantly new ideas.