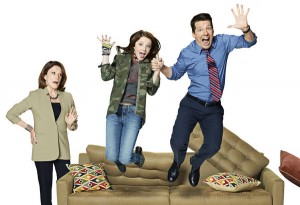 Executive producer Todd Milliner is a busy man who’s gotten just a little busier this year. He and Sean Hayes are partners in Hazy Mills Productions, which now has four shows on the air/coming back: SEAN SAVES THE WORLD (in its first season on NBC Thursdays at 9 PM), GRIMM (in its third season on NBC Fridays at 9 PM), HOLLYWOOD GAME NIGHT (picked up by NBC for a second season) and HOT IN CLEVELAND (which recently had its fourth season on TVLand). However, with Hayes now in front of the cameras as a single father working to save his teenaged daughter and his office if not the whole planet in SEAN SAVES THE WORLD, Milliner’s workload has grown somewhat – although not as much as we might imagine, he says at a party thrown by NBC for the Television Critics Association.

ASSIGNMENT X: Were you and Sean Hayes actively looking for something that he could star in, or did you feel like, “Oh, my God, what am I going to do as a producer now that he’s starring on a show, help!”

TODD MILLINER: A little bit of both. We were always waiting for the right piece of material and the right person to pair him up with, and I think the right year for him to come back. He didn’t want to rush into something, because we were building our company at the same time. So the right person came along, the right piece of material, the right time, it’s a multi-cam, so it allows the schedule to be a little bit more free, so I’m a little nervous, because we’ve been working hard on other series right now, but I’m also thrilled, because I love this show.

I think I would have been more scared if he went onto something like GRIMM. Because this is a multi-cam, the hours kind of lend themselves to having a little bit more flexibility. So I’ll track him down on stage if I have to. I think that we’re pretty good at balancing our times. We’ve been pretty productive, even when we’ve had these things come up in the past.

AX: Did SEAN SAVES THE WORLD come to you as a pitch, or how was it developed?

MILLINER: Well, when we developed it with Victor Fresco, he had a great idea from scratch, and this is the brilliant guy that built the show based on Sean, and then filled out – I don’t think you came in with this notion of, “I want to put a gay single man on television,” I think it was all kind of organic, from putting us with Victor and Sean and then we all went away and went to Magic Mountain and [Fresco] wrote a script.

AX: Might any of your GRIMM actors guest on SEAN SAVES THE WORLD?

MILLINER: Absolutely. In fact, Sasha [Roiz] is always bugging me about coming on HOT IN CLEVELAND. He could be a good boyfriend [for Hayes’ character] – good date, at least. You know, David Giuntoli was on HOT IN CLEVELAND before GRIMM. So we’ve got a bunch of funny people in that cast that you’ll see in a different light. 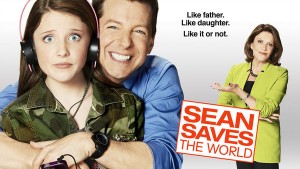 AX: And might any of the SEAN SAVES THE WORLD people show up on GRIMM?

MILLINER: Some comedy folks have done really well – Roger Bart had a really great role on GRIMM. We like to have some comedy, and everything [GRIMM co-creators] David Greenwalt and Jim Kouf do has some comedy in it. So you never know.

AX: SEAN SAVES THE WORLD is set in Illinois, but it’s shot in Los Angeles.

MILLINER: Well, it’s a multi-cam so [producing the show in Illinois] doesn’t make a ton of sense, just from a resource standpoint. But we will film in Chicago. We have four other shows and every time we pitch a show, we’re like, “Let’s film in Chicago, let’s film in Chicago.” So we’ll get there, and then I’ll be there all the time, watching the Cubs.

I think a lot of stuff ends up being set in New York or L.A., so our true love is Chicago, Illinois, and I just got a t-shirt, a gift from one of the cast members, that says, “I live in L.A., but I love Chicago.” And that’s how we feel. And also, I think you get a better interesting cross-section of people that are, I think, hardworking Midwesterners that can populate the office. That doesn’t mean New York and L.A. aren’t hardworking, but just a different type of person.

AX: To ask a few GRIMM questions, when did you find out you’d been picked up for a third season?

MILLINER: Well, it wasn’t really far. We found out maybe a week before you guys found out.

AX: Did you already know you had the Season 3 pickup when you okayed the Season 2 cliffhanger ending?

MILLINER: [NBC] said it looked pretty good, go ahead and – they couldn’t make anything official. We knew it looked really good, so that’s why Season 2 ended the way it did.

AX: Can you say how GRIMM would have ended had they not picked you up?

MILLINER: You know, I don’t think we planned for that contingency [laughs].

AX: So you would have had frustrated viewers mobbing up with pitchforks and torches.

MILLINER: Exactly. We would have had to at least come back for a movie. Or we would have tried to find another home that was going to support us and finish it the way it was supposed to. We laid out this mythology that unfortunately couldn’t have been wrapped up at the end of Season 2, so we were in trouble if we didn’t get picked up.

AX: Is the arc with Adalind, played by Claire Coffee, being pregnant with a royal-blooded baby going to carry through Season 3?

MILLINER: It’s going to be a main storyline through Season 3.

AX: Are you surprised or just gratified with the way GRIMM’s following has just grown and grown?

MILLINER: I’m surprised and gratified. I always thought it was a tough sell, just because we pitched it in 2005 the first time, and it finally got made in 2011. And I think that it evolved so nicely. I think the cast is better, I think the writing is better, they’ve all grown into their characters, I think the characters are interesting, I’m so happy to be on Friday nights

AX: What else are you guys working on?

MILLINER: Well, you know, we just had HOLLYWOOD GAME NIGHT on NBC, which is ours as well.

AX: Are the players all your friends, or friends of friends?

MILLINER: Some of them are friends of Sean’s. He picked up the phone and called a bunch of people. The good thing is, we have been doing these game nights at Sean’s house for years. So anybody who had come to a game night had already been very open to being on the television show, and a lot of them want to come back. 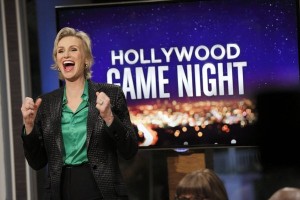 AX: Are all of the games we see on the show games that we’re played at the house, or are some of them new?

MILLINER: A lot of them are new – some from the house, some new, and we try to change them up almost every episode.

AX: Do you have a game creator on staff?

MILLINER: We have a bunch of people who sit in a room and brainstorm different games. We all do it.

AX: HOLLYWOOD GAME NIGHTS has been picked up for a second season. Will Jane Lynch be coming back as the host?

MILLINER:  She’s such a big part of the show. So we certainly want her to. It seems like she’s having fun.

AX: Do you ever get to play?

MILLINER: No. When we used to do them at Sean’s house, I was the host. So Jane trumps me.

AX: If she doesn’t come back, will you host?

AX: Is there anything else that you’d like to say about SEAN SAVES THE WORLD or GRIMM right now?

MILLINER: Stay tuned, because they will have surprises.