Home » the walking dead walk with me 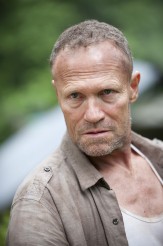 Andrea and Michonne meet the Governor in a foreboding third episode 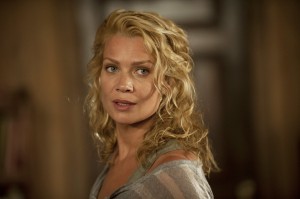 In the third episode of THE WALKING DEAD Season 3, “Walk with Me,” a spectacular helicopter crash alerts Michonne (Danai Gurira) and Andrea (Laurie Holden) to the possibility of other potential survivors in a crucial episode that finally brings us face to face with the comic book’s ultimate villain – the Governor (David Morrissey). His walled Woodbury community of over 70 people looks like a successful attempt to reclaim some semblance of civilization in the wake of the zombie apocalypse…but if you’re fans of the comics, you know at least somewhat where this is going. As the two ladies discover they aren’t the only living humans trying to fight back, Andrea is also reunited with an old “friend,” Daryl’s brother Merle (Michael Rooker). Things couldn’t get any better, could they?

The pacing slows a bit in this episode, but it’s worth taking a breath to set up what could be the series’ most powerful story arc yet. You know the old saying, “if it’s too good to be true…?” Andrea apparently hasn’t, because over the course of this episode she’s not only willing to be convinced to stay at Woodbury but also starts showing signs of wanting to get to know the Governor personally. Michonne is adamant in her distrust, and she has a right to be (has anyone shown her the comic book issues?), but let’s be fair to Andrea. The Governor presents an enticing opportunity to return to some form of stability, and Andrea could certainly use that. Couldn’t we all?

Early on, the production team spoke of concern about taking one of WALKING DEAD comic book creator Robert Kirkman’s most superhero-like characters and translating her to a more realistic television series (well, one with zombies of course), and so far there might be reason for them to be worried. Gurira’s Michonne is a bit…off. Hands on hips at almost every opportunity, scowling at everyone and everything, Michonne is not yet the compelling figure she should be but almost annoying in her unwavering one-note slow boil. She’s not the only one, either, since we’re also introduced to the Governor’s scientific advisor, a clichéd bookish type named Milton (Dallas Roberts) who projects every single suspicious and sad expression like he’s playing to the back row in a theater. We get it, Milton, things aren’t what they appear to be.

He does give us a few new insights into the nature of the zombies, including an explanation for Michonne’s use of the two chained walkers she had with her. Speaking of which, the zombie makeup and effects are better than ever, but the animatronic jawless corpses used as Michonne’s “companions” weren’t too good. They’re out of the story within minutes of this episode’s opening, though, so never mind. As for that tendency toward more comic book fantasy and less realism – always keeping in mind we’re in a world where the dead are regularly returning to life – we also have the return of Merle, which is welcome even if he’s now a more cartoonish version with an Ash-esque modification to his amputated right hand. No, it’s not a chainsaw, but a bayonet blade. Useful, too.

It’s hard to know quite how this episode plays for those that aren’t familiar with the comic book source material. I confess to mild disappointment that I’m not ignorant of the Governor’s print incarnation. This episode offers such a well-framed counterpoint to the more primal survival tactics of Rick’s group that it might even give viewers hope that perhaps there’s another path to success in the post-apocalyptic world. For them, only the presence of Merle suggests lurking shadows in the fire-lit streets of Woodbury, but comic book readers or not, you have to think there’s another shoe waiting to drop.

You don’t have to wait for it either, since the earnest, compassionate Governor we meet at the beginning, a mirror of our own Rick (Andrew Lincoln) a year or so ago, shows his true colors when he brutally dispatches a military encampment, loots their supplies, then returns to sell his Woodbury sheep a bill of goods about how it all went down. As the Governor continues to tighten his grip on his own private Rome, “sitting pretty at the end of the world,” one might almost see a timely political parallel here with another Governor currently appearing on television pretty frequently.

Morrissey may not fit the physical type of the Governor as seen in the comics – that of a lanky-haired biker with a ’70s porn moustache – but so far he not only seems perfectly capable of conveying the villainy necessary to make this a memorable character, but his more handsome look may lend his role more meaning. If beneath such a dashing exterior lurks the heart of a monster, what chance have any of us? And that last scene, a direct adaptation of one of the comic’s most potent early images of the Governor’s lifestyle, speaks volumes about the depths to which this man has sunk. And the nightmare is only beginning…

It’s been a good plan to spend one episode without Andrea and Michonne, and now this one without Rick (Andrew Lincoln) and company, but next week it’s back to the prison for some more drama there while we also uncover more of Woodbury’s secrets.