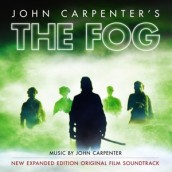 It was 133 years ago that a ship full of lepers went down off of Spivey point near Antonio Bay, and a seemingly impossible 33 years last when John Houseman told the tale to open what’s arguably John Carpenter’s most atmospheric chiller. Only a few piano chords and a barely perceptible synths accompanied the old salt’s ghost story.

But in that simplicity lay a world of fear, even if the re-performed FOG soundtrack that came out in 2000 was perhaps a bit too sonically souped up for its own good. Now at long last, Silva Screen has released the original and infinitely more effective FOG tracks, along with its high-tech version on a second disc. As he’d proved with HALLOWEEN‘s memorable theme, Carpenter was a filmmaker-composer who turned minimalism into a thing of art, much in the same way that John Williams used two notes to conjure a monstrous shark. Here the synth apparitions are far more ephemeral, resulting in a score even more stripped down than The Shape’s.

Yet Carpenter’s themes (done in association with original synth programmer Dan Wyman, and found again by longtime fellow associate Alan Howarth) are far more varied and Gothic, harpsichords, tubular bells and foghorn-like effects conjuring a creeping sense of dread, a slow-burn momentum that gradually congeals into the crashing, relentless percussion that comprises the long-in-the-waiting phantom payback. As such, THE FOG remains Carpenter’s most effectively told score-as-ghost-story. And while he’d grow in technical sophistication, perhaps no work of his is literally as atmospherically powerful. Now with the real deal, the liberties taken on THE FOG‘s last soundtrack incarnation come across as more fun for the purists, especially in how the climactic thunderclaps are electrified with computerized hisses. Completing the package are informative liner notes from the Houseman-like horror score authority Randall D. Larson, along with a Jamie Lee Curtis audio interview that gives slight insight to THE FOG and far more concrete pointers on how to make it beyond being a scream queen.

Click on Link: To Purchase The FOG Expanded Edition soundtrack