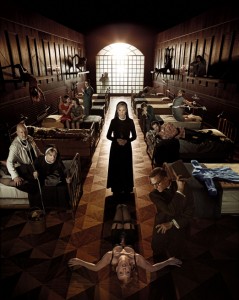 The second season of AMERICAN HORROR STORY, aka the first season of AMERICAN HORROR STORY: ASYLUM (since last year’s storyline has nothing to do with this year’s storyline, the Emmy committee deemed the first year a miniseries – don’t worry about it too much, or you’ll wind up as crazy as some of the characters), gets off to a great start in an opening episode that unleashes everything but the kitchen sink. Actually, the way “Welcome to Briarcliff” plays out, it won’t be terribly shocking if a possessed kitchen sink shows up later in the season, but right now, alien invasion, Frankenstein lab creations, an apparently mad doctor, an evidently sane but pretty mean nun, a serial killer on the loose, and horrors in both 1964 and 2012 are enough.

After a kind of BLAIR WITCH opening, with lusty couple Leo (Adam Levine) and Teresa (Jenna Dewan Tatum) romping through the woods, we get our first sight of Briancliff Manor. In the present, Briarcliff is a decrepit, collapsing abandoned mental institution with a horrific reputation and something nasty living in the walls.

Then we flash back to 1964. Reporter Lana Winters (Sarah Paulson) wants to get an exclusive on new inmate Kit Walker (Evan Peters), who is believed to be the serial killer Bloody Face. However, from what we’ve seen, Kit is the victim of an alien abduction that caused him to be implanted with a mechanical bug.

A war seems to be going on for the soul of Briarcliff. On one side is Sister Jude (Jessica Lange), a tough nun whose piety doesn’t preclude her wearing a red slip under her habit, or her longing for ambitious Monsignor Timothy Howard (Joseph Fiennes). On the other is mysterious Dr. Arden (James Cromwell), who is running some ominous experiments on inmates who arrive without family or friends to inquire about their welfare. Poor Kit falls into this category, and Lana may also once she’s trapped inside the asylum.

One pleasing piece of continuity between ASYLUM and the previous season of AMERICAN HORROR STORY is the extraordinary production design, with elaborate creepy sets that seem to stretch on forever into darker and deeper chambers. The centerpiece of “Welcome to Briarcliff” is the biggest, most Gothic iron spiral staircase imaginable – we worry someone is going to tumble over the rails from sheer vertigo.

There are a lot of returnees from the previous season, all in different roles. Peters here starts out as guileless and decent, though he’s thoroughly tormented by the end of the first episode, and Paulson is pleasingly tough and smart. Rabe’s alternately sly and anxious young nun has some of the same fundamental selfishness as her Season One frustrated society matron.

As for Lange, she is intimidating as all get-out as the iron-willed Sister Jude, though she seems to be wrestling a little with the working-class New Yorkaccent. (The play and film DOUBT seem to have inspired the character, at least to an extent.) Putting her up against the splendid Cromwell as the supremely arrogant Arden makes for a thrilling clash of the titans, though between his penchant for tormenting human experimental subjects and Sister Jude’s virulent homophobia, we’re not rooting for either one of them.

As for our present-day couple, they are such textbook horror movie victims – even in real life, how many people are dumb enough to try to have sex in the twelve most haunted places in America? – that the question is more about what’s in there with them than whether they’ll get out. It’s a good question, though, and energetically dramatized.

The script by Tim Minear has its share of low-key zingers and lays out the myriad possibilities coherently and intriguingly, while Bradley Buecker’s direction creates a strong sense of period, as well as impending dread.

For fans of the first season of AMERICAN HORROR STORY and/or period insane asylum/religious hysteria/alien abduction/Frankenstein terror, there’s a lot here to enjoy.