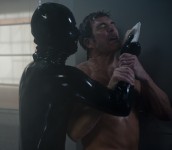 Intriguing plot developments, though fewer scares than in the past

SPOILER ALERT: If you haven’t seen the episode, don’t read this synopsis. With all the other crazy stuff going on in AMERICAN HORROR STORY, perhaps we can be forgiven for not having realized until now the “Duh!” revelation within “Smoldering Children,” which explains why Violet (Taissa Farmiga) and Tate (Evan Peters) have been able to finally consummate their relationship and why Violet hasn’t wanted to leave the house for awhile. Any guesses? Yeah, when it’s put like that, this reviewer feels pretty dense for not catching it sooner.

In 1994, there’s a family dinner at the house, with Constance (Jessica Lange), her two remaining children, cheerful Addie (Jamie Brewer) and seething Tate (Evan Peters), and Larry (Denis O’Hare). Larry owns the house – he’s in love with Constance and has moved her and the kids in after his wife killed herself and their two daughters by fire. Tate knows what’s happened and is so infuriated by Larry’s self-serving take on the tragedy that this seems to help push Tate over the edge. Before Tate sets out on his school rampage, he stops by Larry’s office – and sets Larry on fire.

In the present, Ben (Dylan McDermott) goes to the mental hospital to apologize to Vivien (Connie Britton). At first, Vivien doesn’t want to talk to him, but when Ben explains he now believes she was raped and also reveals she is carrying twins by different fathers, Vivien becomes more attentive. Ben promises to get Vivien out of the mental hospital.

Constance (Jessica Lange) gets a visit from two LAPD homicide detectives (one played by the estimable Charles Dutton), who think she is responsible for the death of her younger boyfriend Travis (Michael Graziadei), who was actually killed by Hayden’s ghost, dismembered by Dr. Montgomery’s ghost and then dumped in an empty lot by Larry (Denis O’Hare).

When Constance realizes that Travis is the “Boy Dahlia” in the news (so named because of the resemblance of his murder to that of the Black Dahlia, also dismembered by Dr. Montgomery), she thinks Larry did it and threatens him with a knife. Larry swears someone in the house did it.Constance is on her way to the house at the same time the detectives are headed there. The knife falls out of Constance’s purse and she’s taken downtown for a little chat.

Larry goes to the house. He encounters Travis, who seems perfectly happy as a ghost and just wants to know if he’s famous now and why Constance isn’t coming (Larry tells him it’s too soon). Then Travis goes to play tea party with Larry’s two young daughters, who are still ravaged by burns, as is the ghost of Larry’s wife. Larry tells his wife that he’s truly sorry for what he did to her, and the wife wants him to set things right. When Larry says he’ll make Constance pay, his wife says Constance isn’t the one who broke marriage vows and that Larry is right on the cusp.

Constance is summoned back to county jail – where Larry has confessed to Travis’ murder. He privately tells Constance he did it to save her, because he loves her – we have a good idea he’s done it because he wants to get far away from the house.

After a truant officer shows up at the house and tells Ben the family will be summoned to court if Violet misses any more school, Ben has a talk with Violet. Violet says she just can’t bear to go back, and Ben tries to find her a boarding school. Tate overhears this and tries to persuade Violet to commit suicide so that they won’t be separated.

Tate dons the rubber suit and attacks Ben, knocking him out so that he won’t interfere, but not killing him because that would upset Violet. Violet, however, doesn’t want to commit suicide – but she can’t seem to escape Tate or the house. Finally, Tate takes her down to the basement – where Violet sees her own dead body. Her earlier suicide attempt was successful after all – Tate failed to revive her, but didn’t want her to know she was dead for fear it would upset her. He didn’t want her or her parents (who of course think she’s still alive) to find out this way, but he didn’t know how else to convince her. Once she’s over the shock, Violet takes the news reasonably well. And don’t the viewers who didn’t realize this sooner feel really dumb.

Violet being dead isn’t entirely a game-changer – she hasn’t wanted to be anywhere else for a long while and right now, it seems as though she is paradoxically safe. She’s happy in Tate’s company and, at least so far, we haven’t seen anything literally worse than death in the house. This story point works in terms of dramatic narrative, it just makes the stakes less rather than more scary.

However, Larry’s plot thread is honestly creepy, with his charred wife ever-so-politely threatening him. In Larry’s case, getting trapped for eternity in the house might well be true torment – a lifetime in jail does seem a better option. By the end, we’re not quite sure why he’s still so devoted to Constance, who has treated him very badly, to say the least. Granted, Larry is a remarkably awful person, too, but selfish doesn’t necessarily equate to obtuse.

The more we see of the back story of Constance’s family, the more we understand what turned Tate into such an engine of destruction. It’s no surprise that he tried to incinerate Larry; the wonder is that Tate didn’t try to kill Constance, at least while he was alive. Now that he’s dead, of course, he wouldn’t want to kill her in the house and have her with him permanently, although this may yet occur.

The episode raises a lot of questions, starting with, will Ben and/or Vivien find out that their daughter Violet is present but no longer living? If so, will they feel tied to the house? What’s going to happen with Vivien’s babies? Is there something in the house besides the ghosts? AMERICAN HORROR STORY makes it fun to guess and also makes us want to tune in for the show’s answers, along with dialogue exchanges like the one in “Smoldering Children” between Constance and Larry, concerning poor Travis, who was posthumously cut in half.Constance to Larry, contemptuous: “He’s twice the man you are.” Larry, deadpan: “Well, he is now.”