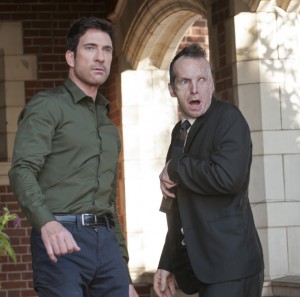 There are a plenty of ghosts and generally unwholesome entities roaming through FX’s hit AMERICAN HORROR STORY, Wednesdays at 10, but one of the most alarming-looking characters is the still-living Larry Harvey, played by Denis O’Hare. With severe burns over half his face, a fire-crippled body and a sightless eye, Larry’s appearance isn’t half as frightening as his personality – he’s a man who can justify anything if it suits his ego or his appetites.

This isn’t O’Hare’s first brush with TV genre fame – he was also the vampire King of Mississippi, Russell Edgington, in Season Three of HBO’s TRUE BLOOD. O’Hare has an extensive career in films and television (he recurred on BROTHERS & SISTERS and was the grim immigration agent in THE PROPOSAL, among other roles), as well as on stage, where he won a featured actor Tony for his work in TAKE ME OUT. The Missouri-born actor sounds delighted to currently be inhabiting the inwardly and outwardly twisted character.

ASSIGNMENT X: When we last saw you as Russell, you were completely burned, and now in AMERICAN HORROR STORY, when we first see you, you’re half-burned. Is there a through-line here?

DENIS O’HARE: [Larry is] a very different guy than Russell, a very human guy, which I love. I love the fact that in the pilot, you see all these aspects of the character in one scene. My character goes from being a monster to a pathetic, suffering human being, which I think is fantastic. I thought the acting across the board was fantastic. I thought the girl who plays the daughter is unbelievable, Taissa Farmiga, the guy who plays Tate [Evan Peters] is unbelievable. Frannie Conroy – to have her in a show – and Jessica Lange, I mean, come on! [Dylan McDermott] is fantastic. Lovely guy. We got to be together a lot of time off set, and we got to know each other really well.

AX: Ryan Murphy and Brad Falchuk are the series creators. Had you worked with Ryan Murphy before?

AX: What did you first think when you read it?

O’HARE: I think the brilliance of Ryan Murphy is that the show does not exist on the page. It exists in his mind, and you have to trust him. So when you read it, you don’t quite get exactly what he’s going for, and you don’t quite get what it’s going to be, but then [in the end result] he produces such amazing, individual, unique stuff.

AX: Murphy is well-known as a big New York stage fan. Did he know you from your stage work?

O’HARE: We actually didn’t have a conversation about it, believe it or not, but I’m assuming he’s seen one or two things I’ve done on stage.

AX: When you were sent the script, were you looking to work in Los Angeles again, or were you just following work?

O’HARE: I’m following work. If I had my druthers, I’d be in New York, only because I’d just gotten married and we’re fostering a baby, and I kind of want to be there, but I’m so happy to be working on such an amazing show, and so I just wouldn’t say no to something like this.

AX: You did something onstage in New York between TRUE BLOOD and AMERICAN HORROR STORY …

O’HARE: I did a play called ELLING on Broadway, back in 2010, with Jennifer Coolidge and Brendan Fraser. It was a Norwegian play. It didn’t do well, partly because it wasn’t given a chance to live, and it’s an odd cookie. It was an odd sensibility, and trying to get it an American audience to understand a Norwegian play.

AX: How is Ryan Murphy as a director?

AX: Your character Larry is blind in one eye, and you wear a contact lens for Larry to show the eye is destroyed. Does that contact lens enhance or inhibit the performance?

O’HARE: I love it. Because [when wearing it] I’m literally blind in that one eye. And I love any time you have an obstacle in your acting, it helps you. So I think it’s great.

AX: Between Larry Harvey and Russell Edgington, you’ve played two regular characters with serious burn makeups in under two years. Are those makeups as miserable to put on and uncomfortable to wear as they look?

O’HARE: The one for TRUE BLOOD was definitely hard to wear, that was tough to wear. This one is actually not that hard to wear, and [the makeup artists] do such a beautiful job of it that I’m thrilled to be in it. And I love doing it.

AX: Do you have to try to make sure you’re articulating and enunciating through the makeup?

AX: Speaking of the TRUE BLOOD makeup, were you happy with the way Russell’s story ended so far, with him buried deep in a pit of concrete?

O’HARE: You know what I’m happy about? I’m happy about such a fantastic season last season, and happy that this season [turned] out to be such a great season, and that they keep talking about Russell. They keep saying, “We’re in a post-Russell Edgington world,” and they keep talking about, “When Russell Edgington pulled his spine out …” See, he’s not dead. If somebody invokes you, you’re not dead. He’s been invoked again and again and again. I love that.

AX: Well, we’ve seen a bit hole in the pit of concrete now, and TRUE BLOOD series creator Alan Ball has said, “Russell isn’t dead.” Can you elaborate on that at all?

AX: How do you like AMERICAN HORROR STORY as a viewer?

O’HARE: I was blown away. I thought it was one of the more unique things I’ve ever seen. It’s definitely something that is cutting-edge, it’s new – I just think it’s fantastic. Not only will it scare you, it will also creep you out. And I think it also involves you in an empathetic way, which I think is surprising.

AX: In real life,  have you ever lived anywhere where you got kind of a feeling that something was wrong in the environment and maybe you should move out again in a hurry?

O’HARE: You know, if you were in New York, and it was rent-controlled, you’d stay!