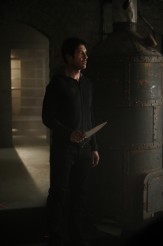 A wonderfully wild first half of a Halloween two-parter

According to lore, Halloween is when the wall between the worlds of the living and the dead become thin, allowing the two to mingle. Gee, like the Harmon house needs any help in that department. All sorts of entities turn up and things get even spookier in the first half of AMERICAN HORROR STORY’s two-parter dubbed “Halloween Pt. 1”.

A prologue sequence shows us the house’s 2010 owners, gay couple Chad (Zachary Quinto) and Patrick (Teddy Sears), who are going through a bad patch. Chad sees the Rubber Man. Chad thinks it’s Patrick and tries to make up, only to be bounced off the walls and then murdered by the black-rubber-clad being.

With Halloween coming now, the realtor (Christine Estabrook) suggests that Ben (Dylan McDermott) and Vivien (Connie Britton) get a “fluffer” to make the house more stylish and welcoming. Ben is freaked out by a visit from Larry (Denis O’Hare), who is still trying to blackmail Ben for $1,000 after Larry killed Ben’s pregnant mistress Hayden (Kate Mara). Ben throws Larry off the property, but Larry swears he’ll be back.

When Chad and Patrick show up on the doorstep, Ben and Vivien have no idea they’re ghosts – the Harmons think the men have been sent by their realtor and Chad and Patrick don’t disabuse them. Soon enough, Patrick is making passes at Ben in the bathroom, while Chad stokes Vivien’s jealousy.

Down in the basement, daughter Violet (Taissa Farmiga) visits secretly with Ben’s patient Tate (Evan Peters), who tells Violet about the house’s original owners. In the 1920s, the mad doctor and his avaricious wife (Lily Rabe) were already having problems even before their child was kidnapped and murdered. The doctor tried some gruesome experiments in the basement to resurrect his little son, with the result, says Tate, still haunting the premises. Upstairs, an argument about decorating details winds up in a yelling match, with Chad telling the Harmons that the house isn’t theirs. Ben and Vivien make the other couple leave, but Vivien is now convinced Ben has lied to her about Hayden – who is apparently now calling Ben on his phone, despite being dead. Vivien wants Ben to leave, but then has a painful pregnancy spasm.

Ben rushes Vivien to the hospital, leaving daughter Violet (Taissa Farmiga) alone at the house. At the hospital, Vivien is told she’s fine, though her unborn child is suspiciously large for an eight-week-old fetus. Then the nurse takes a look at the x-ray and faints. Back at the house, Violet gets a visit from Larry (though she keeps the door locked), unaware of the Rubber Man standing behind her. When Ben and Vivien return home, Violet is nowhere to be seen. Then there’s a knock at the door. Ben opens it to see Hayden standing there. Ben slams the door in her undead face.

Meanwhile, next-door neighbor Addy (Jamie Brewer) goes trick-or-treating as “a pretty girl” and is hit by a car. Her mother Constance (Jessica Lange) tries to drag Addy back to the house, but it would seem to be too late.

Since “dead” and “gone” are two entirely separate states on AMERICAN HORROR STORY, let’s hope we haven’t seen the last of Addy, who Brewer makes very likable and incongruously adult at unexpected moments. It will certainly be interesting to see how Lange, already playing Constance to the hilt, will deal with her character’s grief in upcoming episodes.

Quinto and Sears are entertaining as the depressed couple who don’t seem to be altered any by death, and Morris Chestnut shows up as a (for now) reassuringly normal security expert who has some sparks with Vivien.

There probably aren’t enough descriptors in the English language to express how intense, intricate and insane “Halloween Pt. 1” is in all of its aspects. Pumpkin-carving, apple-bobbing, playing Frankenstein with dead toddlers, Addy’s aching desire to at least pretend to be beautiful, Constance’s ferocious jealousy of her own daughter, whatever the heck is going on with Vivien’s baby, Tate’s connection to the house, Larry’s blackmail plot, Hayden’s return from the grave. It’s like several horror movies spliced together and played at triple speed, which is a pretty cool effect. Some shows build to a mystery in ways that make us impatient to learn the answers – on AMERICAN HORROR STORY, the journey is as much or more fun than the eventual revelations promise to be.