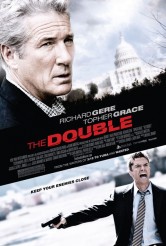 THE DOUBLE is a thriller set in Washington, D.C. that involves both the CIA and the FBI, yet is virtually apolitical. The movie indeed invokes the kinds of spy dramas of yore, like THE MANCHURIAN CANDIDATE and NO WAY OUT, where a search for an enemy agent leads to all sorts of twists and turns. Writers Michael Brandt & Derek Haas make a concession to present-day filmmaking expectations and pack in as much action as they reasonably can without overwhelming the plot, making for a nicely balanced package. It helps that the story contains a couple of good legitimate surprises, and that the chemistry between leading men Richard Gere and Topher Grace is so strong.

Gere plays Paul Shepherdson, a retired CIA operative who is dragged back into the field by his old bossTomHighland(Martin Sheen). Paul’s expertise is required in tracking down a Russian assassin, Cassius. Cassius vanished years ago, but now seems to have resurfaced via a murder that bears his distinctive style. Paul is quite certain Cassius is not responsible for the latest killing, but the rest of the CIA disagrees, as does young FBI agent Ben Geary (Grace). Ben has been fascinated by both Cassius and Shepherdson’s investigation of the man throughout his career, and he’s thrilled to be working with Shepherdson. Shepherdson does not share Ben’s enthusiasm for their partnership. Still, as a loner, Shepherdson has a genuine appreciation for Ben’s happy family life away from work. As the two men search for the killer, they encounter a lot of danger, violence and some very surprising facts.

Cast members of THE DOUBLE have said it’s a good thing that Brandt, one of the writers, also served as director, and this is borne out in the film’s rhythms. The clues get the right emphasis, letting us feel clever for figuring some out before they’re revealed so that we’re really startled when others slip past us to detonate later. It’s a holistic approach to mystery that might not have been possible with a director who had any agenda separate from the story. The action is also staged well, with some intense hand-to-hand fights.

Gere is very much at home in the role of a man who really longs for some peace and quiet, but who we don’t doubt for an instant is entirely capable of dealing with any troublesome situations that may arise. Grace gives Ben a likable intensity without overdoing the eager-beaver aspects of the character, and adding a quality of stillness that lets us easily believe deeper levels exist. Odette Yustman is appealing as Ben’s warmhearted wife, Stephen Moyer (TRUE BLOOD) is entertaining as a deadly Russian agent who hero-worships Cassius and Stana Katic (CASTLE) has a small but notable bit as a scrappy prostitute. Sheen brings urbanity and gravitas to his role as Paul’s boss.

There are a lot of elements in THE DOUBLE that make us feel that we’re watching a movie from a few decades back, except that in the ‘90s, this would have been a highly-trumpeted big studio release. There aren’t too many other movies around right now (pure action spectacles aside) that would blend foreign affairs, the CIA, the KGB and the FBI with barely a whiff of opinion about current events involving any or all of these. This is neither necessarily a positive nor a negative omission in itself, just something of an oddity in 2011 terms. The characters are drawn in the ways they would have been back then, with less irony than most contemporary screen figures. The earnestness makes the early sections of the movie seem a little stuffy, but as the complications accelerate, the movie’s manner eases up so that we become steadily more engaged.

In short, for fans of spy films of the ‘80s and ‘90s, particularly those starring Gere, THE DOUBLE will not disappoint.

Click on Link: Interview with THE DOUBLE and TRUE BLOOD star Stephen Moyer