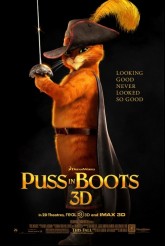 An unambitious but agreeable prequel to the SHREK films, starring Antonio Banderas as the swashbuckling feline

PUSS IN BOOTS is aimed squarely at everyone who grinned when Antonio Banderas turned up as the voice of the Zorro-like cat in SHREK 2 and stuck around for the sequels. PUSS is actually a prequel to SHREK et al, providing a back story for its furry orange hero. Although the new movie borrows a page from its ogre-oriented forebears by combining elements of a variety of fairy tales, PUSS IN BOOTS feels a lot less ambitious than the SHREK movies. It has jokes that make us smile instead of laugh, a “monster” that won’t cause even small children to freak out and a storyline about friendship and betrayal that has served countless live action heist films very well. It also has lots of feline flamenco dancing.

Banderas’ Puss introduces himself via voiceover in a typical caper, romancing a beautiful Persian cat and fleecing her owner. Puss is fighting to clear his name. In flashbacks, we see how Puss and Humpty Dumpty (voiced by Zack Galifianakis) became fast friends when both were children at the orphanage run by the motherly Imelda (voiced by Constance Marie), only to turn bitter enemies when each feels the other betrayed him. Still, when Humpty comes to Puss wanting to team up on a caper involving stealing magic beans from the outlaws Jack (voiced by Billy Bob Thornton) and Jill (voiced by Amy Sedaris) in order to get golden eggs from the goose at the sky castle, Puss sees this as a way to get money for the orphanage and restore his good name. Also, the sultry Kitty Softpaws (voiced by Salma Hayek) is part of the team, so how can Puss say no?

It’s all agreeable and consistent, albeit the animation of the super-sized waterfowl recalls the work of Hayao Miyazaki more than what we’re used to seeing from DreamWorks Animation. Director Chris Miller and writers David H. Steinberg, Tom Wheeler, Jon Zack and Brian Lynch completely eschew the traditional Charles Perrault story (where Puss serves as the wily agent of a humble human owner) in favor of making Puss his own cat. Setting the story in Spain works nicely in terms of exploring a realm that is relatively unexplored in animated fantasy; it also allows Banderas’ Puss to sound at one with his origins. (It doesn’t explain why orphaned Humpty sounds completely American, but he’s a big talking egg, so what the heck.)

Banderas is as invested as ever in being Puss, and Galifianakis makes a fine counterpoint. Kudos to the animators responsible for Humpty, who have come up with a way to make an ambulatory egg work so well as a character that we accept him automatically. There’s also some voice work as the Commandante of the town and a character called “Moustache Man” by Guillermo Del Toro, who is one of the PUSS producers.

PUSS IN BOOTS lacks the little subplots, minor characters and side riffs that are all staples of the SHREK series. In that sense, this film feels like less of an event and more like ancillary marketing. Still, it moves along briskly, Banderas is pleasing company, and we already mentioned the flamenco-dancing cats, right?