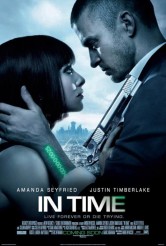 On the upside, IN TIME has a great premise and its, well, timing couldn’t be better, what with its heartfelt sentiments that the super-rich are draining life from the poor hitting the screen right as Occupy Wall Street is in the streets. On the downside, director/writer/producer Andrew Niccol is so intent on his message that he sidesteps a lot of the potential inherent in his science fiction concept in favor of a pretty straightforward futuristic Robin Hood yarn. Nothing wrong with this either, except that it’s seldom as much fun as it could or even should be.

Never mind how things got this way, as our hero Will Salas (Justin Timberlake) tells us in a voiceover prologue that sets things up with brisk effectiveness. Everyone stops aging at 25. After that, everyone gets one free year. Then time literally becomes money, or vice-versa. The rich can theoretically live forever; the poor drop dead when the clock on their arm runs out of days, minutes and seconds.

Will, who looks the same age as his gorgeous 50-year-old mom (Olivia Wilde), lives day to day as a factory worker. One night in a bar changes all that. Will, only 28 in “real” years, saves the mysterious, wealthy and clearly out-of-place Henry Hamilton (Matt Bomer) from being killed for his time by gangster Fortis (Alex Pettyfer) and his boys.

Henry, it seems, feels he’s lived too long and wants to die, but he still thanks Will for saving him by giving Will a hundred years while Will sleeps. Then Henry times out, but (presumably) doesn’t realize that the manner of his death makes it look like Will murdered him. Then something happens to make Will decide he’s going to fight the system. He finds an unexpected ally in Sylvia Weis (Amanda Seyfried), the bored-stiff daughter of the incredibly rich Philippe Weis (Vincent Kartheiser). Soon Will and Sylvia are redistributing wealth to those literally about to drop dead from poverty. Timekeepers, led by the formidable Raymond Leon (Cillian Murphy), are determined to stop the duo from irrevocably messing up the social order.

One doesn’t like to second-guess a filmmaker in choosing a path for his own concept, but it does seem that taking the whole notion of immortals engineering their own longevity at the cost of life to the already underprivileged and turning it into essentially a standard futuristic chase drama is kind of like using a Ferrari as a mail truck. It certainly brings something new to the function, and Niccol provides a few nice verbal and visual riffs on his subject, but it also seems like there are missed opportunities here.

Then again, as far as making his point about how one class is brutally exploiting another, Niccol could hardly have conceived a more direct metaphor. However, while there’s dialogue about it, we never get a sense of the poor living each moment to the fullest, though the criminal characters come much closer than their law-abiding fellows. Likewise, Sylvia voices the boredom of the very rich and Henry talks about having lived too long, but we never see what’s stopping these people from having a good time. Indeed, Sylvia’s father Philippe seems to be perfectly happy with his time/wealth. The future of IN TIME may be based on a new dynamic, but it looks suspiciously like a lot of other cinematic dystopias where one group abuses another.

There are also some smaller issues that we might not notice if the film were more playful, or at least had more inner life. Sylvia has time to change her dress, but even though she’s running full out for the last half of the film, she never slips out of those gigantic high heels and her paint-thick mascara never smudges, no matter what she goes through. On a similar note, Murphy is marvelously intimidating as the relentless Timekeeper, but he doesn’t look as though he’s twenty-five years old.

This said, Timberlake is warm and relatable as the driven Will and Kartheiser does a good job of playing a cold old soul behind a young face. Pettyfer plays the villainous Fortis with a becoming sense of joie de vivre.

IN TIME is worth seeing and it is clearly made with passion, but it doesn’t have the underlying vitality that makes the best science fiction immortal.

Click on Link: Justin Timberlake talks about his new sci-fi film IN TIME