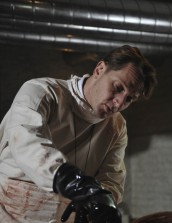 Not all that spooky (at least by this show’s standards), but certainly hurtles the plot along 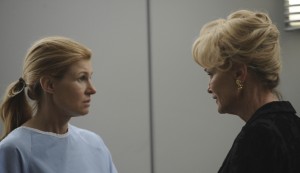 Should we not have realized before, the AMERICAN HORROR STORY episode “Spooky Little Girl” reminds us that even ghosts can be self-defeating and work against their own best interests. Tate (Evan Peters), as we learn, has not only committed a violation by raping Vivien (Connie Britton) but also made a cosmic “oops” by impregnating her.

In a flashback in 1947, we see Elizabeth Short (Mena Suvari), about to become famous as the murder victim best known as the Black Dahlia, going to the house to barter sex for dental work with the dentist currently residing there. The dentist gets carried away with anesthetizing Elizabeth and the ghost of Dr. Charles Montgomery (Matt Ross) dismembers the body for easier disposal, resulting in the gruesome mess that subsequently achieved (real-world) fame.

In the present, Elizabeth comes to Ben for treatment. Ben, unaware she’s a ghost, declines to have sex with her in exchange for treatment. When Elizabeth has sex with young Moira (Alexandra Breckinridge), Ben refuses to join them and fires Moira. Hayden comforts Elizabeth and tells her that she has actually achieved her dream of becoming extremely famous.Elizabeth cheers up, despite being dead.

Vivien’s obstetrician calls Ben and tells him that Vivien’s fetal twins have two different fathers. Ben is furious and accuses Vivien, in the mental hospital and too drugged to reply, of lying to him. Ben gets a visit from the police and from Hayden’s sister, but before the situation can get out of hand, Hayden shows up. The police detective and Hayden’s sister assume she’s alive, as does Ben. Hayden tells Ben she’s seen Vivien with security man Luke. Ben confronts Luke, but Luke says a) that he’s sterile and b) that he hasn’t had sex with Vivien. Ben realizes that Vivien may really have been raped after all, as she has repeatedly claimed, and that he has done her a terrible injustice. As Ben comes to this conclusion, he is dumbfounded when sees Moira (Frances Conroy) as everyone else sees her.

Meanwhile, Constance (Jessica Lange) is being characteristically awful to her younger lover Travis (Michael Graziadei), an aspiring actor. Hayden sees Travis passing by and seduces him to ascertain that she can have sex with a living man. Travis, however, is in love with Constance. Hayden has a fit of rage and stabs Travis to death, but then realizes that Ben will either go to jail for the murder or move out of the house. Travis bemoans the fact that Constance is right – he’ll never be famous. Elizabeth cheerfully points out that being dead may help. Crazy doctor Charles is there to dismember the body and Larry (Denis O’Hare) puts it outside where it will be found.

Constance finds out that Tate raped Vivien. She is more concerned with the fact that her boy sullied himself, but then she asks her psychic friend Billie Dean (Sarah Paulson) what would happen if a spirit and a human had a child. Billie Dean says this would be the birth of the anti-Christ and herald the end of days.

This seems a little late to introduce Christian theology into the game, but it does at least raise the stakes for the living and the dead. It’s also nice to see Ben growing a bit of a backbone; he’s still a far cry from sympathetic, but now that he’s seeing the light, he’s less actively infuriating. Mara is doing a very good job of showing us Hayden’s rationale within her irrational behavior.

Throwing the Black Dahlia into the mix seems more like flash than substance, but Suvari has a great period look and attitude and this is far from the silliest speculation on the real-life crime. Of course, if Travis’ killing turns out to be a major plot thread, there may be more purpose to this subplot than is apparent at this point.

One caveat about “Spooky Little Girl” – given how easily the newly-dead adapt to their ghostly states, it’s becoming harder to feel a sense of dread about what is happening in the house. The worst that can happen seems like it’s not all that bad, since the dead have emotions and can experience romance and even sex. It’s time for AMERICAN HORROR STORY to up the stakes again. Fortunately, the show excels in doing just that, so there’s every reason to hope they’ll come through to scare us anew.