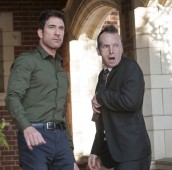 Into the life of every series, some exposition must fall. This is true of AMERICAN HORROR STORY, but at least “Murder House” shows rather than tells us the origins of the horror in the Harmon family’s hellish domicile.

A prologue shows us Constance (Jessica Lange, looking great) as a young woman, walking in as her husband rapes young maid Moira (Alexandra Bredkenridge). Constance blames them both, shooting Moira through the eye (explaining the adult Moira’s glass eye, if not her still-living presence) and blasting her husband as well.

In the present, after the home invasion in last week’s episode, Vivien (Connie Britton) is determined to sell the house and move. Husband Ben (Dylan McDermott) says they can’t afford it, but Vivien contacts the realtor (Christine Estabrook) who sold them the house and blackmails her into trying to resell it. Ben sees a patient (Adina Porter, who plays Tara’s mother on TRUE BLOOD), but suddenly finds himself digging a hole in the backyard with no recollection of how he got there. Ben then has an altercation with young Moira, who appears as old Moira (Frances Conroy) to everyone else – he thinks she’s trying to seduce him.

Curious about the house’s history, Vivien takes guided tourist drive that lists “the Murder House.” A flashback shows us the original homeowner, a doctor who built the mansion in the 1920s for his beloved wife Nora (Lily Rabe). Alas, the doctor became a laudanum addict who became obsessed with performing strange experiments in the basement, and Nora got so angry with his lack of income that she arranged for her spouse to perform secret abortions. As the tour guide is about to relate the tragedy that ended the couple’s shared lives in the house, Vivien realizes she’s bleeding between her legs and leaps out of the car. At the doctor’s office, Vivien is reassured that she’s fine, but Ben faints. Later, it turns out that he was dosed with laudanum, probably by Moira. The patient turns up in a hospital, after having tried to kill herself in Ben’s office – again, Ben doesn’t recall the incident until the police play him a tape (the patient stole his recorder) that captures him just sitting there as the patient cuts her arms.

Violet (Taissa Farmiga) wants to remain in the house, as she sees it as the place where she and her mom survived, not where they were attacked. Vivien is starting to be swayed toward staying after all.

Meanwhile, Ben’s young former mistress Hayden (Kate Mara) shows up at the house while Vivien is out. Hayden hasn’t had an abortion after all and now wants Ben to be a father to their baby. While Ben is trying to sort out what to say and do, former house resident Larry (Denis O’Hare), who killed his own family there, smashes Hayden in the head with a shovel several times, killing her before Ben is able to intervene. Larry points out that he’s saved Ben a lot of trouble and Ben still hasn’t killed anyone. Larry would also like a thousand dollars for his silence. Ben, in shock, buries Hayden in the hole he’s already started – which contains Moira’s mortal remains.Constance tells Moira she’ll never be able to leave now.

There are some other strange details, like Tate (Evan Peters) showing up where only Violet can see him and Nora asking Vivien for a tour of the house, with Vivien unaware of the huge hole in the back of Nora’s head. However, “Murder House” is for the most part what novice viewers might have expected from AMERICAN HORROR STORY in the first place – lots of fevered emotions and even a few murders, but not the big supernatural scares that have marked the previous two episodes. There are hints of Tennessee Williams here, particularly in the sequences between Constance and Moira, and in the arguments between the mad doctor and his mercenary wife Nora. We can see the writers and actors are having fun here, and it’s enjoyable in a slightly campy way.

“Murder House” certainly doesn’t lack for event. Seeing Ben become more and more trapped by demands and mounting problems on all sides provides a thread of dark humor, and the scene between Britton and Estabrook is a hoot. We also find ourselves feeling a lot of sympathy for Moira, who is getting blamed by everyone for everything. There is a nice sense of intrigue now about how and why she’s been resurrected.

Still, there are other shows on TV that did and still do the sort of drama we see here. “Murder House” lays narrative pipe very well, but it doesn’t have much of what makes AMERICAN HORROR STORY unique. There’s nothing wrong with playing for suspense and black comedy instead of full-tilt horror for awhile, but a return to form wouldn’t be a bad thing.