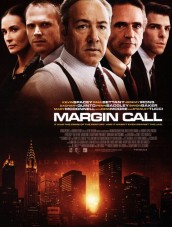 MARGIN CALL has a foundation in solid drama. After all, the collapse of Wall Street in 2008 had an immediate and horrible effect on many people, with aftershocks that are still being felt today. The film, written and directed by J.C. Chandor, also has a superlative cast, with Kevin Spacey, Paul Bettany, Jeremy Irons and Stanley Tucci, just to name a few of the key actors, and a sense of real outrage.

As MARGIN CALL begins, an enormous Wall Street firm is cutting a huge percentage of its staff all in one day to become leaner and more profitable. Among those let go abruptly is risk analyst Eric Dale (Stanley Tucci), who protests that he is working on something important. No one listens and Eric is sent away without even his office cell phone. Before he leaves, Eric passes a flash drive to one of his not-fired subordinates, the highly intelligent if shy Peter Sullivan (Zachary Quinto, also one of the film’s producers). Peter works on the contents of the flash drive and discovers that the company has, essentially, bought up too much worthless stock that is about to come crashing down. The information is passed up the chain until the big boss (Jeremy Irons) flies in via private helicopter and convenes a meeting of the board in the middle of the night, while Peter and a workmate (Penn Badgley) are sent out to try to find Eric.

If this all sounds a little talky and sedentary, it is. In its opening sections, MARGIN CALL is reminiscent of other movies like UP IN THE AIR and COMPANY MEN dealing with how people cope, or don’t cope, with being fired. If MARGIN CALL isn’t exactly original in addressing this topic, it is at least insightful, with Tucci affectingly giving us five stages of grief whipping through the wronged Eric. Then MARGIN CALL tackles the bigger picture and falters. As a writer, Chandor has fun with some of the characters and gives his actors some good speeches. He does not, however, know how to place exposition – the firm’s problems are explained at least three times in varying levels of detail. As a director, he doesn’t know how to open up the story. There are some nice camera angles, but they are not fluid, and scenes unfold within rooms so tidily that we never get a sense that anything more than talk may happen.

Then again, it’s pretty much always worthwhile to see Kevin Spacey playing a character who we initially perceive as one kind of man and wind up seeing as a different sort of person altogether. Irons is charming as an incredibly wealthy businessman who is so lacking in a conventional moral compass that he truly doesn’t know he’s doing anything wrong. Bettany is solid and Quinto comes across as bright and determined.

MARGIN CALL is worth seeing for its cast and for its intentions, but it’s easy to imagine how the whole thing could have been done better.

AGREE? DISAGREE? LET US KNOW WHAT YOU THINK – COMMENT BELOW