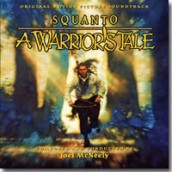 Sure October might be one of the best Intrada-Disney months ever with the release of such long-awaited hardcopy treasures as 20,000 LEAGUES UNDER THE SEA and THE BLACK HOLE, but if there’s a new title in their Disney bunch that represents some of the best music The Mouse House has ever gotten, then it’s from a movie the studio devoted to an American Indian. However, we’re not talking about the Oscar-winning score that was bestowed on POCAHONTAS, but the rousing music given to a live action brave named SQUANTO, who pre-figured that soundtrack by just a year.

No offense meant to Alan Menken, who got to play talking tree spirits and cute animals, but it’s Joel McNeely’s majestic score that deals with the more palpably believable (for a Disney movie that is) adventures of pre-America’s ambassador to imperious explorers from across the sea, some of whom just happened to land on Plymouth Rock. While there are drums and pipes for native flavor, SQUANTO mostly has the feel of a widescreen western adventure that just happens to have Thanksgiving in it, music that’s full of the kind of gloriously sweeping wagon train-ready themes that recall such scenic epics as Jerome Moross’ THE BIG COUNTRY. While England and Europe’s relations with our land’s original inhabitants could be called tragic at best, McNeely is more interested with conveying his hero’s nobility. It’s a stirring, melodic force of one man’s goodness, even with all he’s put through by the white man- as mostly heard through our movie culture’s idiom of Hollywood-style scoring.

Like fellow symphonic melodist Bruce Broughton, Joel McNeely stands as an unsung master of the symphonic craft with such noteworthy 90’s scores as TERMINAL VELOCITY, THE AVENGERS and the Disney adventure IRON WILL. While it’s great that he’s still applying his magic at the studio with such projects as TINKER BELL, McNeely’s a gifted talent just waiting to return to the kind of bigscreen adventure typified by SQUANTO, a score whose vitality remains as fresh and beautifully performed today as it did in 1994. Hopefully, somewhere an executive will see this excellent album’s smoke signals that one of Hollywood’s most impressive symphonic braves is waiting for action again. Now that, I’d give thanks for.