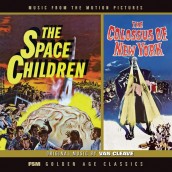 Music for a beneficent space brain and a giant killer robot packed with some screwed-up dura mater fill up this impressive double feature of great sci-fi music, composed by the strikingly-named Van Cleave (first name Nathan). While better known (if uncredited) for the underscore of WHITE CHRISTMAS, it’s Van Cleave’s sci-fi scores for the likes of ROBINSON CRUSOE ON MARS (also put out by Film Score Monthly), CONQUEST OF SPACE and numerous TWILIGHT ZONE episodes that stand as career highlights. But where Van Cleave used CONQUEST and ROBINSON to play the heroism and peril of the outer limits, 1958’s THE SPACE CHILDREN and COLOSSUS OF NEW YORK are very much about the uncanny threat of creatures in our midst- making for a checklist of all that’s great about classic 1950’s sci-fi scoring, from the spine-tingling sounds of the violin and Novachord to… the solo piano?

Van Cleave composed SPACE CHILDREN and COLOSSUS for prolific genre producer William Alland (whose other sci-fi greats included IT CAME FROM OUTER SPACE and THIS ISLAND EARTH). But if any space invader would suffuse Van Cleave’s BRAIN, then it would be the brooding strings and organ of THE DAY THE EARTH STOOD STILL– instruments that Bernard Herrmann used to convey the relentless, unfathomably fearsome power of the giant robot Gort. But where Herrmann at least allowed his pal Klatuu to have orchestral humanity, Van Cleave employs organs, lurching brass, pulsing electronics and lonely strings to create a score that’s all about the hypnotic, potentially horrific pull of a higher intelligence, as opposed to any orchestral niceties from the cherubs it’s gathered for seemingly nefarious ends. Accordingly, much of the score has the chill of an alien shuffling towards your door, an approach that still proves quite unnerving for how period specific it is. Van Cleave’s only musical nicety here is a full, religioso orchestra that reveals the brain’s peaceful colors upon its return to the great beyond- a thankfully uplifting climax to an otherwise gripping, and thoroughly nightmarish excursion through the outer limits.

If you thought THE SPACE CHILDREN was stripped down, little can prepare listeners for the nearly all-piano score of THE COLOSSUS OF NEW YORK. But given the insanely low music budget he was handed for this oddball take on FRANKENSTEIN, Van Cleave’s choice would ultimately go beyond budgetary necessity to a place of true inspiration, resulting in what’s likely the only solo piano score to grace a creature film (Brian Easdale gets the human psycho tip of the hat for the for doing that with the human psycho of PEEPING TOM). The COLOSSUS’ echoing keys are given just a bit of shimmering percussion and the gentle bells of an uncomprehending child. All make the sight of this glowing-headed monster even more bizarre, while also communicating the poor brain-trapped soul who’s pressed into a life of intellectual servitude by his mad doctor dad. It’s an unlikely, but highly thematic score that could easily be mistaken for some lost Debussy piece, if it weren’t for the monstrous, pounding chords that have the big lug taking ray-beam vengeance on the United Nations. It’s music that shouldn’t work by any human right, yet somehow does through the power of weird science.

Film Score Monthly‘s CD is a must-have for connoisseurs of atomic age scoring- as is the DVD release of COLOSSUS itself on Olive films after so many decades in the lab of early morning television.

Click on link: To buy the SPACE CHILDREN / COLOSSUS OF NEW YORK soundtrack