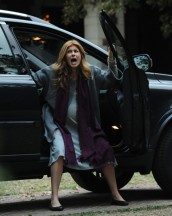 A trippy and affecting episode, with Vivien at last giving birth

In case anyone was worried, AMERICAN HORROR STORY demonstrates with “Birth” that, even if Vivien is now the mother of the Antichrist (by the episode’s end, we’re still not sure exactly what the baby is or is not), there’s plenty of tale left to be told.

This said, a lot of tale is told in “Birth.” When Ben (Dylan McDermott) comes to the mental hospital to rescue Vivien (Connie Britton), the doctor advises both of them that Vivien should probably have a Caesarian section immediately. Even though Vivien is only six months pregnant, the larger of the twins she is carrying is ready to live outside the womb; moreover, this twin is siphoning nutrients away from its weakening womb-mate. Vivien, however, insists that she will go to a hospital once she and her family are in Florida.

Violet (Taissa Farmiga) fears that Chad (Zachary Quinto) and Patrick (Teddy Sears) will somehow kidnap the babies, so she tries an unsuccessful targeted exorcism. All this does is prompt Chad to tell Violet that her boyfriend Tate (Evan Peters) murdered both Chad and Patrick, and more recently raped Vivien. Vivien is heartbroken, telling Tate that although she still loves him, she cannot and doesn’t want to be with him – he isn’t attracted to darkness, he is the darkness.

Vivien stays in the car while Ben goes inside to get Violet – he’s still unaware that his daughter is now a ghost. Violet tells her disbelieving father that she’s dead, which is why she can’t leave the house. While Vivien waits in the car, she goes into labor. Constance (Jessica Lange) hustles the protesting Vivien into the house, where the ghostly Dr. Montgomery (Matt Ross) and his bloody-uniformed assistants tend to her. Ben doesn’t know what the hell is going on, but he and Violet stay by Vivien’s side. The first baby is stillborn, whisked away by Nora Montgomery (Lily Rabe), who wanted a baby of her own. The second baby is born healthy. Vivien asks to see her son, but Constance takes the child (her grandson), claiming she’s just going to clean him off. Vivien dies from the strain of childbirth, leaving Ben alone. However, Vivien is happy to be reunited with daughter Violet.

“Birth” is such that we actually do feel for Ben, despite the louse we’ve seen him be. The bond between Vivien and Violet is genuinely touching; when Violet tearfully tells Vivien, “I’m sorry you lost your baby,” Vivien’s loving response, “I haven’t” is the kind of moment that brings lumps to throats. It helps that Britton can so skillfully move from frigid rage to astonishment to acceptance to the warmth of a parent comforting a child.

There’s a trippy aspect to “Birth” as well, with Ben and Vivien flashing back to the far happier birth of Violet, and the couple trying to absorb why an old-fashioned medical team has materialized in the living room. Given what we know of Dr. Montgomery, we also have reason to be apprehensive of what may happen – it’s not exactly frightening, but it’s unsettling, which works fine here.

There are a lot of homophobic slurs thrown around in this episode, but they come from the deeply bigoted Constance and the homicidal Tate – it’s hateful talk from people who are full of hate, not an endorsement of the sentiments or the verbiage. Sears as Patrick is given a moment of enraged integrity in confronting Tate.

Writer Tim Minear also works in a creepy little side ghost story, illustrated with handsome minimalism by director Alfonse Gomez-Rejon, that recounts the Roanoke Croatoan legend as it may (or may not) apply to the situation in the house. As in “Piggy, Piggy,” the incorporation of folklore into the main storyline works very well – if this becomes a regular motif next season (yes, Virginia, there will be a second season of AMERICAN STORY), it will be welcome.

With Chad and Patrick having removed themselves from the parenting competition within the house and Nora apparently content with the stillborn child, this still leaves Vivien, Ben, Constance and Hayden all vying for custody of the living infant. How this is all going to work out is a fascinating question. How the answer to this can possibly be scary, given what we now know of the house and its inhabitants, is equally intriguing, but in any case, there’s never a dull moment with these people, living and dead.